10 Best Castles in England You Should Visit

A medieval castle is probably the first thing that comes to mind when you think of England’s history. And why not — where to explore castles if not in England? Here, you will find the country’s most iconic fortresses, from favorite places of the Royal Family and private homes with incredible art collections. Get ready for a perfect royal day out! 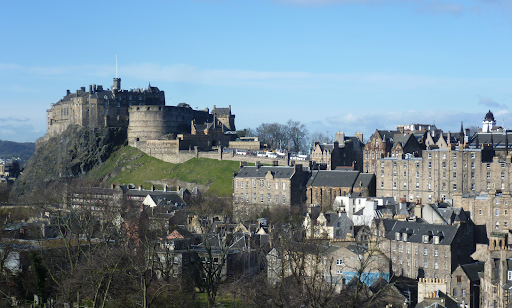 Why not start exploring castles of England with the world’s oldest inhabited fortress? If you want to immerse yourself in over 1,000 years of British history and see the highlights of Edinburgh Castle, take an audio tour created by a local expert guide. 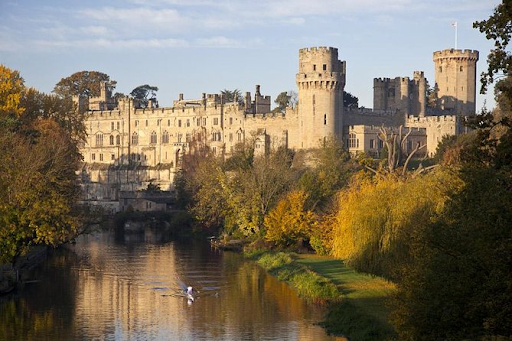 Get the ultimate medieval experience at Warwick Castle, located in the heart of England, just 40 minutes from Birmingham. Here, you can immerse yourself in over 1,100 years of history through remarkable exhibitions, tours, and famous live-action shows.

Witness the historical battles of the Wars of the Roses. See the world’s largest working catapult launch and the country’s biggest birds of prey display, and admire the archer’s skills in the bowman show. The castle is an incredible attraction — marvel at the well-preserved medieval architecture after ten years of renovation. 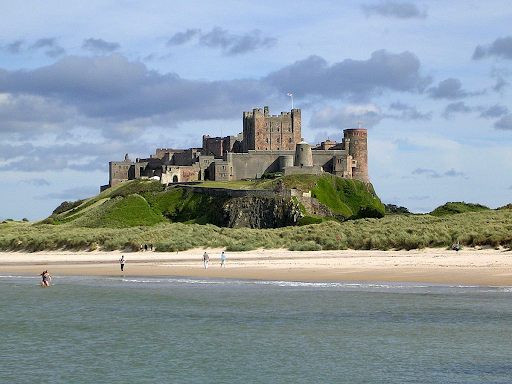 Learn more about the medieval Anglo-Saxon Kingdom of Northumbria in Bamburgh Castle on the northeast coast of England. It is located on the rocky Whin Sill and is one of the world’s most significant archaeological sites.

For more than 1,400 years, the Bamburgh Castle’s walls have witnessed many important events, from the rise and fall of the Kingdom of Northumbria to the War of the Roses. It is now the home of the Armstrong family, open to the public. Here, you can tour the castle and explore local stories, legends, and myths and see a beautiful private collection of artwork. 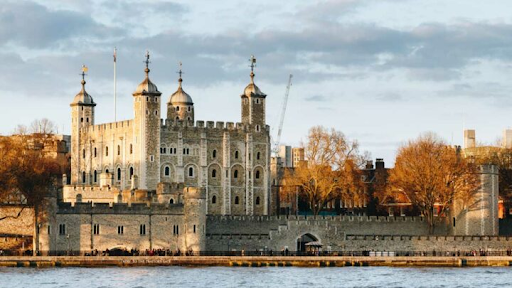 Founded by William the Conqueror, the Tower of London is a legendary historic castle that served as a fortress, prison, royal residence, and even zoo. It is impossible to imagine a trip to London without visiting one of the city’s most iconic gems.

If you wish to learn more about the Tower and uncover all its mysteries, explore the attraction in the company of an expert tour guide. No need to plan anything: this audio tour will lead you through the main highlights, including the Royal Chapel, the famous Crown Jewels, and historic armor from the Line of Kings exhibition. 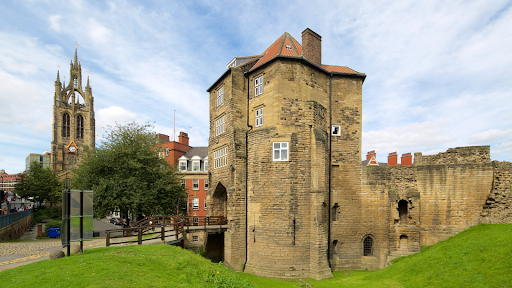 Discover the remains of the medieval castle that gave the city its name. At the old Norman fortress, you can explore the dark and mysterious past of England, especially if you visit the dungeons of the Castle Keep and walk through the Black Gate.

Founded in 1080, Newcastle Castle, with its breathtaking interiors, is a great starting point for walking around the city. Here, you can learn more about the history of Newcastle and enjoy stunning views of the city from the castle’s roof. Also read about the best things to do in Newcastle. 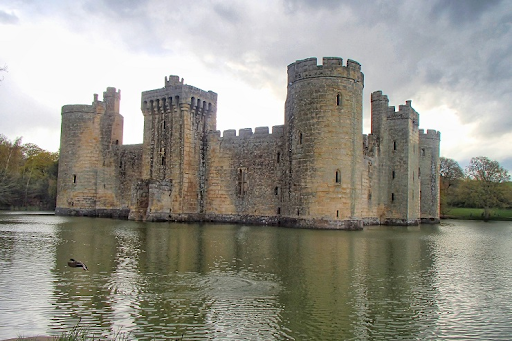 Continue to explore medieval England at Bodiam Castle, considered one of the world’s most magnificent sites, perfect for a family day out. Built by a former knight Sir Edward Dalyngrigge, the castle grounds were once buzzing with life as it was an important place for trade.

There are also plenty of things to do now at Bodiam Castle, from climbing the towers of the ancient building to medieval quests, archery, and armor displays. Architecture lovers will appreciate the castle’s oldest surviving parts, including the remains of the medieval bridge, the Gatehouse, the Postern Tower, and the Chapel. 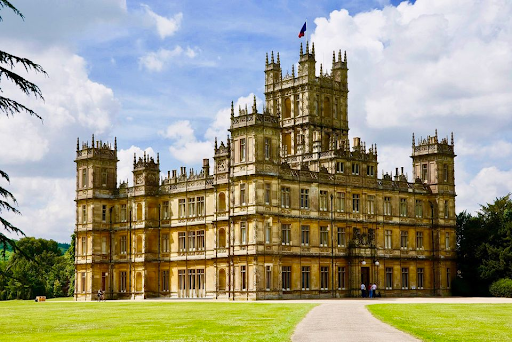 You have probably seen this enormous castle before, but under a different name on the famous show Downton Abbey. Whatever your opinion of the show, Highclere Castle is still a must-see for anyone who wants to experience the authentic atmosphere of England.

What makes this place so unique? Aside from beautiful landscapes with ancient gardens, the castle is a work of art. Initially a medieval palace built in the 12th century, it was redesigned in the 19th century by the architect of the Houses of Parliament, Sir Charles Barry. Explore the castle’s many rooms to marvel at its clever architectural details. 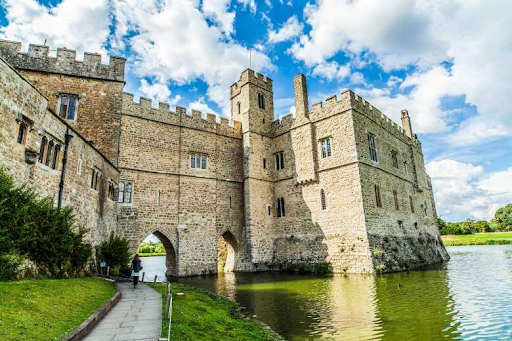 A visit to Leeds Castle can become one of the highlights of your trip to England. Located on 500 acres in the Kent countryside, it was initially a Norman stronghold built by Robert de Crevecoeur over 900 years ago.

At the Gatehouse exhibition, you can discover the castle’s rich history. Learn how a fort became a residence for monarchs, including King Edward II and Catherine of Aragon, one of six wives of Henry VIII. Trace the castle’s lifetime, from being a palace to a prison, a country house, and a hospital. Don’t miss a chance to visit the Birds of Prey Center to dive deeper into the atmosphere of the Middle Ages. 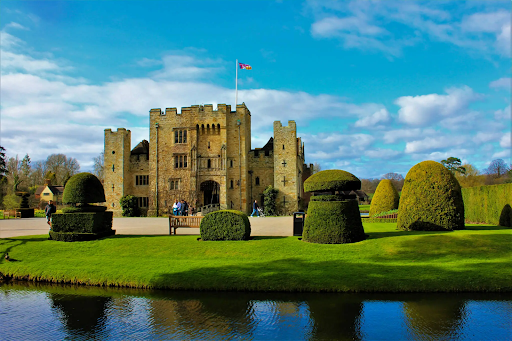 If you want to learn more about the complicated history of the Tudor period, head to Hever Castle, a childhood home of Anne Boleyn, the second wife of Henry VIII. Once a defensive fortress, the castle is an excellent place for everyone, whether you like history or wish to admire the beautiful interiors with Tudor artifacts, including tapestries and portraits.

Hever Castle is also a fantastic spot for a fun day out. Find your way out of the famous 100-year-old Yew Maze and relax in award-winning gardens with dahlias and the Katsura tree. During the summer season, you can practice archery and enjoy jousting shows. 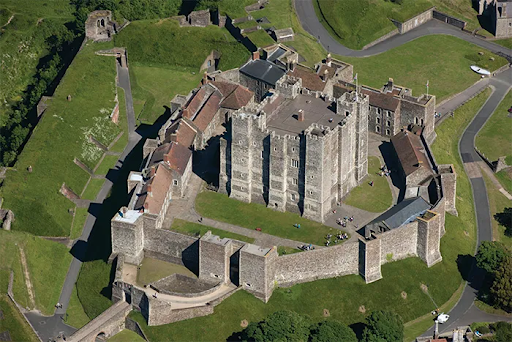 Located at the edge of the English Channel, Dover Castle is one of the most visited attractions — and it is no surprise why. Founded in the 11th century, the castle has been the scene of many intrigues and schemes.

As an important strategic point, Dover Castle has been described as the key to England. You will be able to embark on a journey back in time to the Norman roots of the castle and World War II when the site was at the center of the famous Dunkirk evacuation.

You may be interested in: 10 Scientific Ways to Learn Anything Faster