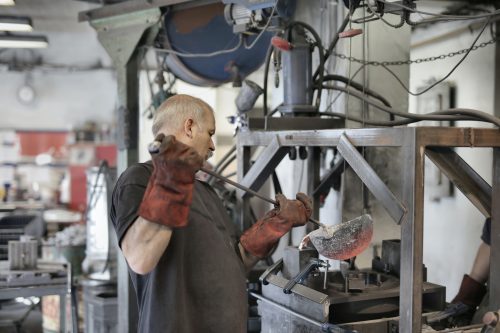 The products so created may be used in production lines or may be assembled to create other objects.

In essence, the automated production process may involve a wide variety of methods. These include bending the sheet metal from perforated metal suppliers, cutting, folding, punching, stretching, heating it, or a combination of these.

While these procedures were traditionally done by hand, advances in technology led to the adoption of specialized machinery for some of these tasks.

More recently, the introduction of computer software and artificial intelligence into the process has meant that the entire process can now be automated.

Thanks to automated sheet building, the manufacturing world has seen a drastic reduction in the level of and necessity for human intervention.

Below are the top benefits of automation in sheet metal fabrication.

As mentioned earlier, most of the processes involved in molding the sheet metal into a three-dimensional product were traditionally done by humans.

That meant the production company had to engage a large quantity of workers to get these taxing tasks done on time.

Even with the use of mechanical systems, it would take plenty of time for the fabrication of some items to be completed.

For instance, the bodywork of a Boeing plane or other large industrial sized products would be time and labor intensive on the workers involved. The same applies to the bulk production of smaller items.

However, with automated fabrication, the production cost is tremendously reduced as the fabricator can now deploy robotics in lieu of human workers.

The robots work in conjunction with the computer software to render the precise model of products required within the requisite time frame.

Not only does the company save on the labor costs in the process, but it also avoids assigning its workers repetitive tasks, thereby boosting their productivity.

The designs that can be churned out by automated sheet metal fabrication are virtually limitless.

It is a method that is highly dynamic and customizable.

That is because the sheets of metal are available in numerous sizes and specifications. There is also a wide range of sheets to choose from, ranging from copper, aluminum, to steel.

Some automated fabricators even offer additional custom options depending on what the client wants.

The availability of such options presents consumers with the flexibility of going for highly individualized designs suited to their specific needs.

Also, since it is possible for manufacturers to place their orders online, they can easily keep track of their inventory and only order what they need at a particular point in time.

As a result, they are saved from the hassle and cost of warehousing or organizing for storage space for component parts.

That also means they will only spend on the parts they need for a given production cycle.

In comparison, the traditional human-driven processes involve a lot of logistical challenges before each fabricated piece is rendered complete.

That is because in most cases, the mapping, cutting, bending, shaping, and assembling of a single item must go through several hands of skilled workers before the item is complete.

Passing the products through all these hands eats into the company time and also puts a strain on the workers.

However, with automation, a robot armed with different tools can perform several of these tasks consecutively and seamlessly, leading to higher levels of production.

Throughout the entire process, the only human resource needed is a handful of workers who monitor and ensure the proper performance of the robots.

As the old adage goes, humans are to error.

When a person does a repetitive task, there is a real likelihood that the individual will suffer fatigue over time and begin making mistakes.

At the same time, humans are subject to other failings such as occasional low morale, absent-mindedness and stress while working.

In some cases, such human failings may heighten the risk of industrial accidents and result in the production of sub-standard products.

These aspects are more pronounced in the industrial sector where bulk production of items is the order of the day.

However, manufacturers can avoid all these issues by engaging the services of automation experts. The deployment of robots through automated sheet fabrication means a lighter workload and less fatigue among the remaining workforce.

That is because most professional fabricators have state of the art automation machines which include laser cutting equipment, deburring machines, waterjet cutters, benders, etc.

These machines are capable of delivering better precision, as they can cut, bend, or mold different sizes of sheet metal.

Also, these machines can manipulate the sheets to varied degrees, including small angles that may otherwise prove impossible to achieve through the human hand.

Another related benefit that comes with automation is the reduction of waste materials. Where fabrication is done by hand, and the worker makes a mistake, the fabricator may find himself faced with a lot of waste material in the end.

In contrast, automation minimizes waste through optimal use of the sheet metal. The robots hardly make errors and can manipulate the raw material much further than a human could.

A single robot is capable of handling numerous tasks that might have otherwise required the input of several workers.

That includes handling heavy material during loading and unloading, seamless transition from cutting to bending and deburring the sheet metal, among other capabilities.

Most importantly, with the aid of collaborative robots, these functions can be undertaken within a fraction of the time traditionally taken by humans.

Due to the faster turnaround you get from automation, your company will thus enjoy scalable production and be able to meet market demands for the products more effectively.

Interesting Related Article: “How Automation Is Crucial To Today’s Businesses“