5 Most Common Ways That Malware Spreads 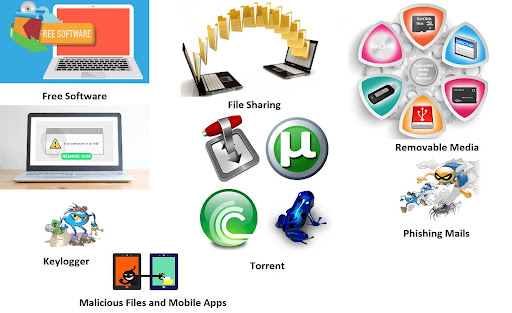 The origins of what we now call a computer virus date back to 1949, when one of the most important scientists of the twentieth century, John von Neumann, presented an article called “The Theory and Organization of Complicated Automata”, in which he demonstrated that a computer program was in able to reproduce autonomously.

Malware: Types And Techniques Of Diffusion.

Over the years, in addition to ascertaining the veracity of von Neumann’s theories, the dangers associated with the computer world have evolved, and today terms such as viruses, trojans, and ransomware have become very popular in computer terminology. But how is this software different? We know the main malware and what characterizes them.

The word malware is given by the contraction of the words ” malicious software “, and indicates any program used to disturb, damage or access without permission to one or more devices.

Through this software, an attacker can perform acts that have more or less impact on the affected user: from the theft of sensitive data to their elimination, from checking the device to its damage, etc.

Some Malware That Made History

While there are many variants of malware today, the 10 most common are:

Always One Step Ahead

We have seen a series of 10 malware, which have long been the cause of many headaches for individuals and companies around the world.

Everything starts with awareness. Having a good knowledge base that allows us to recognize different types of threats can make the difference between being in control and being at the mercy of events.

How Does Malware Spread?

The access doors to our systems are different: phishing via e-mail, infected USB keys, malvertising, and many others… more generally, there are at least 5 triggers that we can list.

The increase in the number of malware and its rapid development is making life difficult for anyone online, so first of all we need to improve our knowledge of the subject.

Today, we are called to recognize the potential risks we face, and consequently, the behaviors that open the doors of our systems to cybercrime. Knowledge, prevention by using high-quality data protection tools, and 24/7 monitoring are the keywords to allow our company to thrive in the most optimal conditions.

You may be interested in: What is malware? Definition and examples