9 Reasons To Use React For Web Development 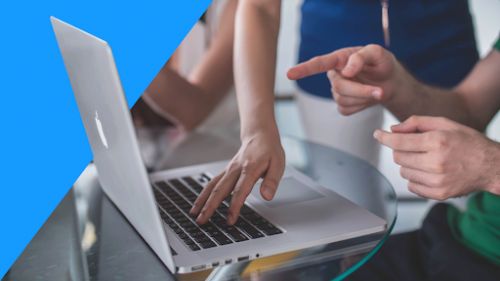 The world of programming is evolving at great speed. New technologies emerge every year, but only a few gain acceptance and popularity among developers and businesses. In recent years, ReactJS has been the go-to solution in web development, with 40.14% of developers using it. 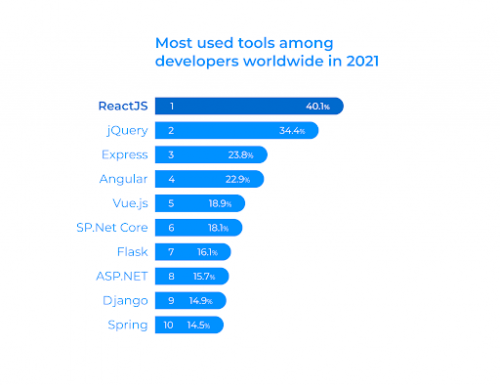 The relevance of this open-source JavaScript library is reflected in the number of global giants that use it: Facebook, Skype, DropBox, Baidu, PayPal, Netflix, Airbnb, Pinterest, and SoundCloud Plus. React has earned this popularity for its simplicity and, at the same time, its list of exceptional benefits, which are updated and improved on average twice a year. And that’s what this article will focus on.

What is it usually used for?

The scope of React is fast and clear frontend development, particularly of single-page applications and custom web solutions.

However, the range of use, in general, is not limited to web development. If you need a mobile application, you can turn to React Native and easily create cross-platform apps for two operating systems (iOS and Android) simultaneously. There are enough React development tools to implement a wide variety of projects.

Reusable components and support for server-side rendering are just two of React’s many benefits. So let’s take a look at why this particular frontend library has taken the lead in recent years and is predicted to continue to do so.

The advantages of React are valuable because they apply not only to developers but also to the business itself. 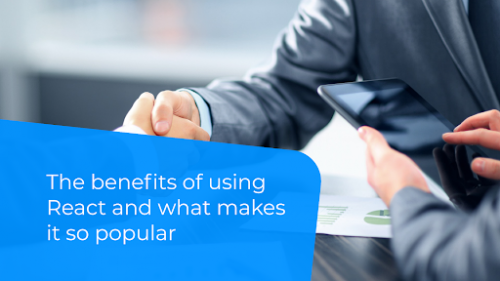 JSX — JavaScript Syntax Extension simplifies the creation of components and, as a result, makes the code clear and readable. That’s especially essential when writing ‌large code. It provides convenience because all components are in one place, and there is no need to look for the necessary elements in HTML pages. Thus, it not only simplifies, and accelerates the work of developers, but also reduces working hours, thereby fruitfully affecting the business.

Isomorphic software means that the backend and frontend have the same code. Why ‌isomorphic is a benefit of ReactJS? It’s easy to use, comfortable and reduces the time for development.

The DOM allows developers not to have to re-render several times to see the changes. Everything works smoothly. It provides effective updates even for small elements without general changes.

In React, there is just one way to transmit data between parts of a mobile app. This is a pledge for easy analyzing the code, debugging, and testing.

A digital product needs to win a place in the organic search engine results. But this task is not easy, especially for JavaScript-based applications. To be at the top of the ranks, you need to work hard and ReactJS takes that responsibility. To solve it, React uses Server-Side Rendering (SSR) and DOM: work on the server, render it, and return the virtual DOM to the browser as a standard web page.

The technical components of an app directly affect the user experience and, ultimately, the demand for the product. Fast page loading applies more enjoyable for users and also improves indicators such as ‌bounce rate and engagement.

The benefits of ReactJS go beyond technical capabilities for those who study and work with it. The community is also an important factor. Ability to get quick and expert advice speeds up problem-solving. There are an ever-growing number of tutorials, YouTube videos, forums, etc., and all are publicly available.

Choosing the right tool to turn an idea into a high-quality and up-to-date application is a crucial step. It influences not only the development process but also further exploitation. ReactJS is advanced and flexible, making it relevant to different categories of applications. If you think that the presented advantages are not enough for your project, you can also work in conjunction with the following technology stack: Node, Luxon, Next.js, Firebase, Styled Components, GraphQL, Material-UI.

React is a fast, and modern tool for the visual component, the effectiveness of which can be fully assessed only in practice. If you have a project idea, outsource ReactJS development and we will help you with implementation.