AI beats 5 poker experts simultaneously at their own game 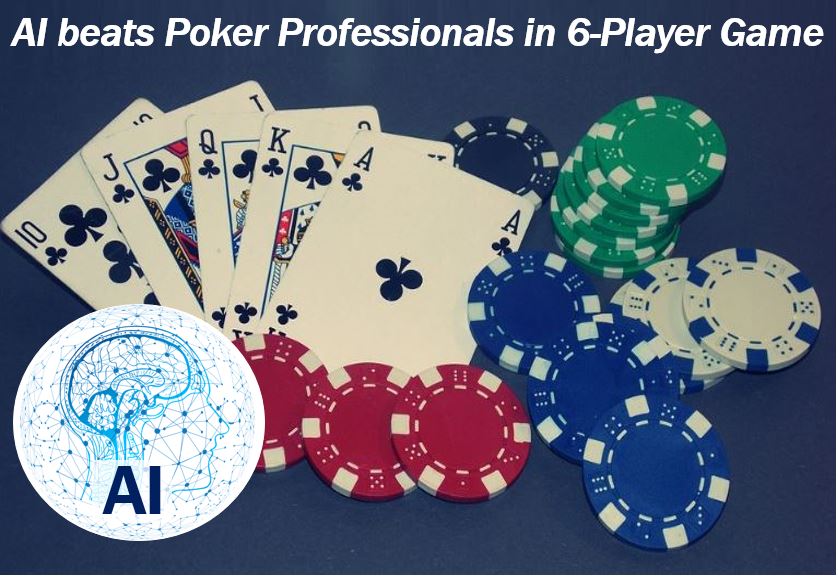 An AI has managed to outperform humans in a six-player game of poker. AI stands for Artificial Intelligence.

Researchers at Carnegie Mellon University together with Facebook AI developed the artificial intelligence.

Noam Brown and Tuomas Sandholm, from Carnegie Mellon University in Pittsburgh, wrote about their study and findings in the prestigious journal Science (citation below).

This is a milestone for AI, which can now beat more than two human poker professionals simultaneously at their own game. The game was a six-player no-limit Texas Hold’em, which is currently the most popular form of poker.

Over the past few years, researchers have made great strides in AI. Games such as poker serve as benchmarks, challenge problems, and milestones for this progress. Previous poker challenges had never involved more than two players.

Games with three or more players present AI with significantly more variables, i.e., considerably more to think about, work out, and make predictions.

Brown and Prof. Sandholm used a program they call Pluribus. Pluribus is Latin for ‘more.’ It learned how to play this type of poker by setting up games with five copies of itself.

When Pluribus played with five elite professional Texas Hold’em players, or with five copies of itself versus one professional human, it outperformed humans over 10,000 hands of poker. It was significantly better than a human.

In an experiment involving thirteen professional poker players, Pluribus played five of them at a time and beat them.

“Pluribus achieved superhuman performance at multiplayer poker, which is a recognized milestone in artificial intelligence and in game theory that has been open for decades.”

“Thus far, superhuman AI milestones in strategic reasoning have been limited to two-party competition. The ability to beat five other players in such a complicated game opens up new opportunities to use AI to solve a wide variety of real-world problems.”

“Playing a six-player game rather than head-to-head requires fundamental changes in how the AI develops its playing strategy. We’re elated with its performance and believe some of Pluribus’ playing strategies might even change the way pros play the game.”

What is Artificial Intelligence?