Researchers have improved an AI that detects depression from your voice. By analyzing the sound of people’s voices, this AI can now detect whether they are depressed more accurately, say scientists at the University of Alberta.

AI stands for Artificial Intelligence. AI refers to software technologies that make intelligent devices like robots or computers think like humans. They also make them behave like humans. AI contrasts with NI or natural intelligence. 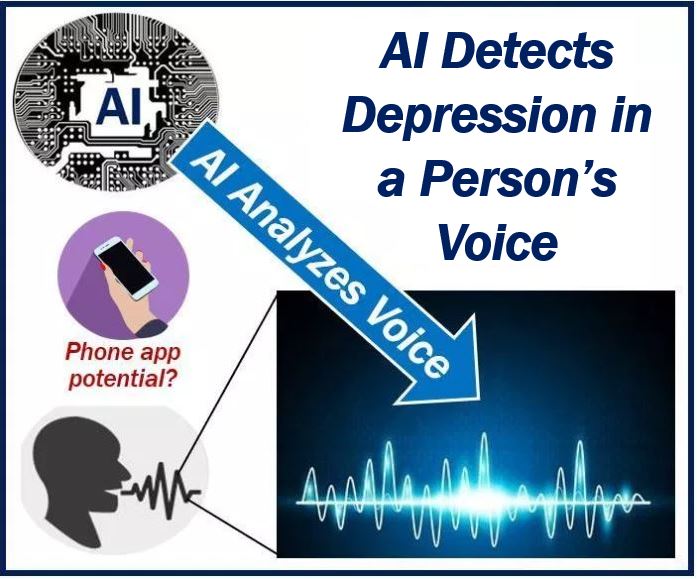 Mashrura Tasnim and Eleni Stroulia presented their study and findings at the Canadian Conference on Artificial Intelligence (citation below).

The researchers used two standard benchmark sets of audio recordings to develop a method that combined many machine-learning algorithms. The recordings were between 5 and 50 minutes long. The algorithms detected depression from acoustic cues more accurately.

Tasnim and Stroulia built on previous studies which found that the timbre of peoples voices contained data about their mood.

The researchers aim to develop helpful applications from the technology they have developed.

“A realistic scenario is to have people use an app that will collect voice samples as they speak naturally. The app, running on the user’s phone, will recognize and track indicators of mood, such as depression, over time.”

“Much like you have a step counter on your phone, you could have a depression indicator based on your voice as you use the phone.”

Approximately sixteen percent of women and eleven percent of men in Canada will have depressive symptoms during the course of their lives. Many Canadians aged twelve to nineteen, i.e., 3.2 million people, are also at risk of developing depression.

The authors believe that their tool could help individuals reflect on their own moods or mental state over time. It could also be used by health care professionals and providers.

What is Artificial Intelligence?