Does AI take the fun out of everything?

The development of Artificial Intelligence (AI) is easily one of the most “unique” achievements of the 21st century. It is incredible to think that machines can be effective in solving problems or minimizing the number of mistakes, made by humans. We already save on labor costs, thanks to automation and machine learning. The unstoppable rise of sophisticated mechanical devices has made all tasks much easier, replacing work traditionally done by hand. 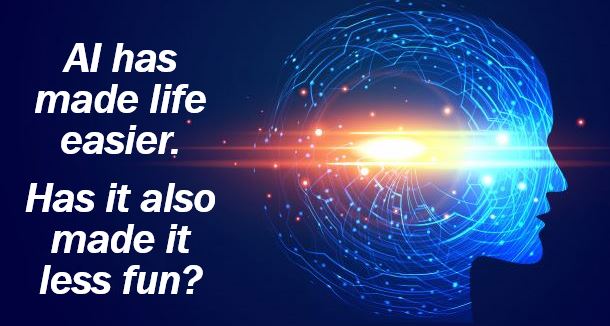 However, every great invention or piece of innovation has its own disadvantages. Indeed, AI makes life much easier, but it also – arguably – takes the fun out of everything. It reduces our own imagination, in doing things in a more creative way. In this article, we will explore this issue in slightly more detail.

We can take a look at the example of blockbuster movies. Right now, special effects play a huge role, in almost every action movie. The development of modern technology made it possible to make every type of animations – which were simply unimaginable in the previous century. It is a pleasure to watch them, especially on a big screen. But we feel that the effort or fun is just not the same. In the past, people had to rely on themselves to produce high-quality content.

Regardless of technology, they had at their disposal. Unfortunately, we see this imaginative “spirit” slowly disappearing or withering away.

Over the years, creativity has also steadily diminished in the gambling industry. Calculation and number generators in the online real money casino industry have reached their peak. Now, artificial intelligence does everything – employees do not need to bother creating new algorithms. They neither have the motivation to make new generators. Why? AI does everything from scratch, being involved in the process right from the beginning.

The creation of supercomputers and engines has taken its toll on many sports. We particularly see this in chess. If we turn back to the “golden era” of chess, we can observe a clear difference. People had to rely on their brains in devising new moves or strategies. Now, the game has turned on its masters – in fact, the entire sport has turned into a game between robots.

Back in the day, players could actually enjoy the game. Now, mistakes come at a high price. What is more, the fun is almost gone. How so? Almost half of all professional chess games end in a draw.

If you are playing chess online, you can barely see your opponent. He or she may use easily use a super-engine, which rarely makes any mistakes. Of course, there are a lot of rules, which are meant to prevent fraud and promote fair play online. But chess has been altered forever – will we ever be able to go back to when it was just a fun game between two players?

Can you remember games on old-school consoles? Once upon a time, it was very hard to get to the end of the game. Game developers really beat their brains out to give you a unique experience. Right now, the game might be more sophisticated – especially when it comes to available features or graphics.

All that being said, the gameplay itself is much easier! What is our problem? You might actually stand a chance at defeating the bad guys, but it has all come at the cost of creativity.

As we become increasingly dependent on AI, even for the most basic jobs – we might find ourselves in a situation, where it is difficult to find a job. Especially, if it does not concern machines! It is possible that people’s overall cognitive and mental abilities will decrease over time.

As the famous physicist, Albert Einstein once said: technology might actually surpass human interactions. Why? Because the world will be faced by “a generation of idiots”. Perhaps Einstein was too blunt, in giving such a harsh verdict on humanity. But he was right one respect – computers and AI already “simplify” our live processes.

This will have an inevitable impact, even on our most immediate environment. We already see this in the entertainment industry – right now, creativity is being sucked out and is gradually disappearing.