Your Guide to Learning Ansible: Top Mistakes to Avoid 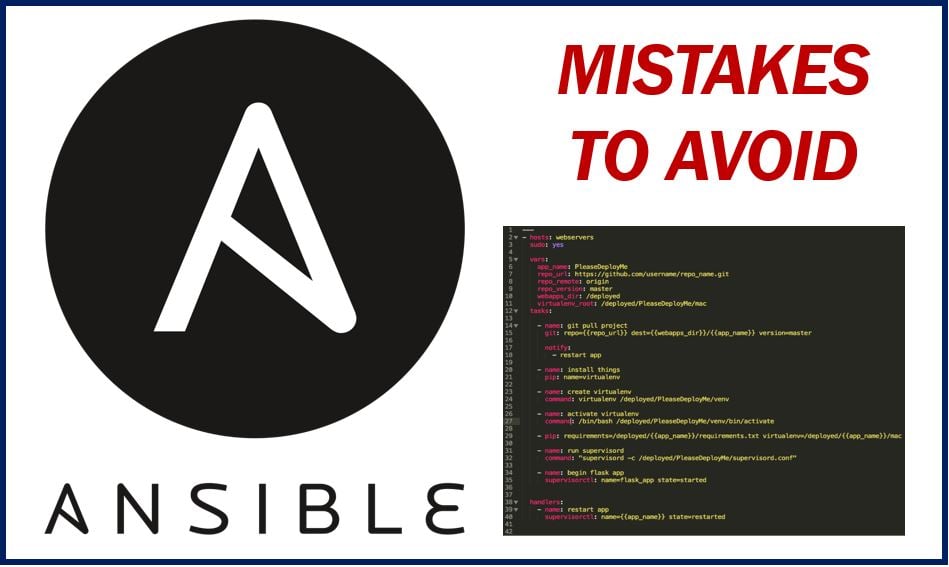 Ansible is a configuration management, deployment, and orchestration tool used to provide productivity gains to automation challenges. It’s an open-source software and powerful enough to be used by complex IT environments for successful automation. Ansible is simple to learn for most IT professionals, and if you’re a beginner then an Ansible course would be a wise choice to get acquainted with the platform. When navigating the platform, knowing the common mistakes made by most can help you avoid them and save users’ precious time.

Top mistakes and how to avoid them

Here are the top 10 mistakes made by most Ansible learners and what you can do to avoid them.

Not everything needs to be tagged. It’s fine to tag a playbook, and in most cases, it’s even needed, but avoid tagging inside a role. To avoid using tags in roles, while building a playbook, simply comment on the unnecessary roles in the playbook. Use tags to gain execution time. When you have to perform a specific action, use a specific new playbook instead of a new tag.

Setting up an enterprise deployment on a personal account is a common mistake most learners make. For consistency, create a new account with a corporate address.

Also, selecting the tools should be done carefully. Know what your motivation is behind building the role can help you use correct tools. For example, something as simple as Java can be of great help.

Multiple tasks in one role, especially when they are not related can easily cause confusion, not to mention that it’s bad for the readability of the playbook. Making smaller roles with specific names makes managing and reading the playbook much easier. And, having a naming convention helps a lot. If the role is used in some OSS only, mention it in the role’s name so that the purpose of the role is clear just by reading it.

Not having separate folders for community roles

There are a variety of roles available on Github and on the Ansible-galaxy, too. If you wish to update the changeable roles, put them in a separate folder to make them easier to find.

Getting alerts on the exceptions that matter to you can be as important as creating a new project. There are a variety of monitoring tools and you can choose the one that best suits your purpose. Also, a proper backup is just as important for efficiency as well as saving time.

Not using grouping_ by module

For parameters that work differently in different operating systems, the group_ by module is of great help. With this, all the systems will be combined in dynamic groups based on the operating system. Users can even modify the settings to make them group-specific. Or to set variables and apply a specific role to a specific system.

Use git or any other version control system to store your playbooks and commit when any changes are made. This helps you keep an inventory of when and why rules that were automating your infrastructure were changed. Using version control is essential and helpful.

YAML parser is the core playbook runner in Ansible, which uses added logic like command line key=value pair shorthand. Though the formatting is quick and convenient, it reduces readability. YAML has more lines, but these lines are short, thus reducing the horizontal scrolling and line wrapping capacity. Using the shorthand, even with the YAML folded style is not recommended.

Not cleaning up debugging messages

Going by Ansible’s general setup, it will stop executing a task from the playbook when it comes across any host errors. While this is a good thing, certain errors needn’t stop a playbook from running, and that’s when the ignore_errors command is helpful. But, setting a generic igronre_errors: yes command can ignore all errors. Ansible built in settings, like failed_when can be used to overcome this.

Learning something new always comes with its own twists and turns and that’s when best practices come in handy. And, mistakes can be made not just by beginners  but by a few experienced developers  as well. An Ansible training course can also help you navigate the learning curve better so that you can understand the platform clearly.

Author Bio: Nidhi Mahajan is a guest blogger and passionate about content writing. She has been blogging about Tech for more than 7 years now with variety of topics covered under Tech related articles. To read her more pieces on the stuff visit Tech Guide at Pop-pins.com