Augmented reality (AR), which overlays reality with sensory inputs and computer-generated images, will aid more jobs in the future and change several professions.  Surgeons, in particular, are starting to see this potential in AR technology.  In the next sections, let us discuss how AR aids in and changes surgical procedures.

AR, which has almost the same concept as virtual reality, combines text and computer-generated 3D objects in real time.

Its characteristic of being able to quantify and then manipulate a spatial data so that it relates to another dataset to another, called registration, significantly contributes surgical navigation.

More hospitals and CLHF homes try combining innovative equipment and the latest technologies like augmented reality to speed up the treatment process, improve its accuracy and precision, and deliver better results.

This potential of augmented reality is especially significant to procedures taking place in another venue outside an operating room.

In another example, augmented reality in particular to the use of Telementoring lets the experts see what a surgeon sees while in action.

At the same time, the experts can guide a surgeon in real time –during the procedure, not over the phone or through email before/after a surgical procedure.

Traditionally, a surgeon would seek the advice of the experts through those means, but now, they could interact with them in real time.

As a result, surgeons could get tailored guidance, contributing to and increasing the safety of a surgical procedure and the patient.

During surgery, therefore, navigation solutions can help surgeons see through their patients.  Following, they can increase their safety because such technology gives them an x-ray vision.

In addition, AR headsets, for instance, are able to collect information from the OR along with machine learning assistance.

These devices make automated recommendations. A few examples include highlighting any critical structure, which will improve surgeon awareness to prevent the damage of such structures.

In addition, such headset can be used in coordinating with the team while also assessing each member’s skills during the surgical procedure. 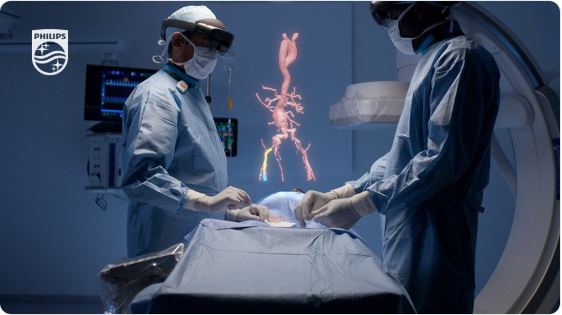 The prior offers less the immersive feeling in the environment that the display creates. On the other hand, the latter doesn’t allow the visual field of an operator to have a real world contact, but the optical see-through display does.

Without even saying, the optical type might be able to offer better environment control in the event of anatomic graphic image misalignments or during emergencies.

A 3D image can also be projected overlay a patient. The procedure’s safety can be improved.

It is done by projecting the nerves and major vessels, among others, onto the patient.  While AR does so, surgeons can also reduce the time it would take to perform a surgery.

Certain applications have already been used by some medical practitioners. Recently, OpenSight AR System, a medical solution for HoloLens, has been approved by the FDA.

[HoloLens, which is has a teaching version, is cleared for preoperative planning.]

Just as said, AR is promising in assessing the skills of surgeons, surgery residents and even students.

It can be used in training them, too, through using real life objects that can offer a better tactile feedback. And with AR, testing specific and unlikely scenarios is also possible and doable.

Augmented reality technology is a promising innovation to improve a surgical procedure’s precision while increasing a patient’s safety.

As the technology improves, surgeons can get detailed insights during every stage of a procedure and eventually achieve better precision.

In the following section, learn more information on how AR surgical navigation works.

This technology was developed to enhance capabilities in managing X-ray dose. It makes use of a high-resolution optical camera/s and works by integrating these cameras in the flat panel X-ray detector.

It is done to image the patient’s surface before combining what external views that the high-resolution optical cameras have captured along with the internal and external anatomical view of the patient in 3D.

So for instance, a patient’s spine view in real time relative to the planned approach can improve the safety of the patient in addition to implant accuracy, surgical tool navigation and procedure planning and times.

According to the medical experts, AR can increase surgical procedure safety.   It could save lives because it’s able to increase accuracy while reducing errors, which would otherwise put someone’s life at risk.