Best Semi-Automatic Handguns for Beginners in 2022 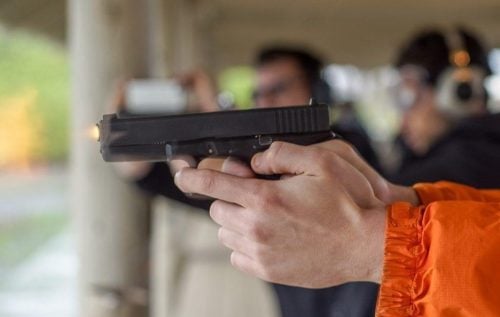 Most beginners have a hard time choosing their first firearm since they lack knowledge and expertise, while the market offers a great deal of choice, especially in the handgun category. Beginners often pay more attention to such secondary things as appearance, whereas some far more important aspects like safety, trigger action, caliber, and personal needs are left without proper consideration.

Prepared by one of the largest gun stores in the US, this guide contains everything you need to know about semi-automatic handguns to make the right decision. The second part of the guide contains our top list of the best semi-auto pistols for beginners.

But before we start with semi-automatics, let’s clear up why this guide omits revolvers. Don’t get us wrong. A revolver can be a valid option, but it has some limitations that can be avoided if you choose to go with a pistol. One of the major downsides of revolvers is capacity. If you look for a self-defense gun for concealed carry, the magazine of a semi-automatic pistol, even a small-size one, gives you more chances to hit the target. Besides, switching magazines is effortless and fast, and spare magazines are easy to carry. Hand reloading of revolvers takes a lot of time, and speedloaders are inconvenient to carry. Though the defensive ammo for revolvers is widely available, the price tends to be much higher. Finally, pistols offer more in terms of customization.

What to Look for in Beginners Pistols

We believe your first pistol should be easy to shoot and handle so that it doesn’t compromise your performance and lead to you developing bad habits. For that reason, we don’t recommend you buy double-action/single-action (DA/SA) or double-action-only (DAO) pistols unless you’re willing to dedicate a sufficient amount of time to learn how to handle these designs.

In double-action mode, the trigger has a long and heavy travel that cocks and releases the hammer, whereas a single-action trigger is far easier to press because its task is only to release the hammer. DA/SA pistols like the Beretta 92FS are the hardest to master because you need to switch between the two trigger behaviors. 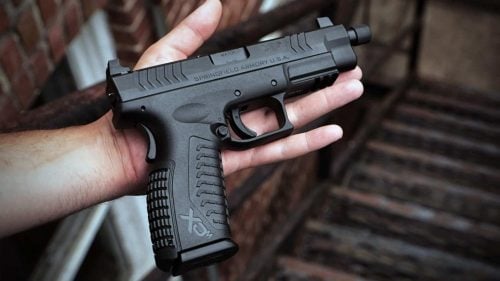 Single-action and striker-fired semi-automatic pistols are the best to start because they are easier to master and provide a consistent firing experience.

To gain proficiency with any pistol, you need to practice. And if your intentions are serious, you’ll be practicing one or two times a week. This means you’ll probably be shooting hundreds of rounds, and practicing can hit you in the pocket if you go with a pistol caliber requiring fuel that is beyond your budget.

A 9mm pistol is the best way to go because the 9mm ammo is cheap and abundant. Besides, the 9mm Luger is a great defensive cartridge that offers a nice balance of recoil and power.

If you consider a pistol for concealed carry, you need to be very careful with the size. Pocket and sub-compact semi-auto handguns are lightweight and small, which makes them a perfect CCW for everyday carry, but it comes at the cost of shootability. Small-size guns have a short sight radius, a little area to grab them onto, and less mass to absorb recoil, resulting in decreased control and accuracy. A compact or a larger sub-compact is the best semi-auto pistol that offers a nice balance of shootability and concealability.

And finally, consider a semi-auto without the external safety. Exactly. Beginners lack instincts for handling controls, and in a high-stress situation, you risk leaving the safety engaged. Many striker-fired pistols come without the external manual safety because they employ internal safety mechanisms. For example, racking the slide to chamber a round only half-cocks the pistol, which means it can’t fire without the trigger being pulled. 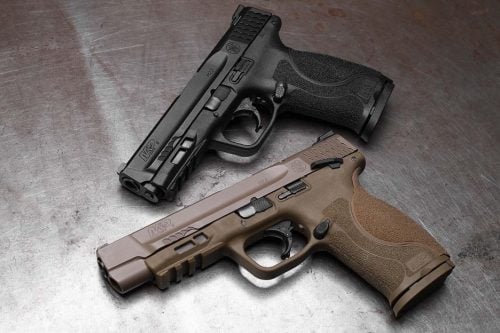 The M&P M2.0 series contains an array of models, from sub-compact to full-size pistols chambered in popular defense cartridges, but it’s the S&W M&P9 M2.0 Compact in 9mm we’re interested in. Having a barrel length of 4 inches, it’s one of the most popular pistols for self-defense and concealed carry.

The M&P9 M2.0 belongs to the company’s M&P series of extremely reliable pistols designed for Military and Police use. Its reliability was proven during tests where it managed to fire two thousand rounds without any malfunctions.

The M&P9 M2.0 is a striker-fired polymer pistol with an overall capacity of 15 rounds with 1 in the chamber. The curved trigger can be a little uncomfortable for some shooters, but the pull is crisp and light, and the reset is audible and tactile. The pistol features a low bore axis and a stainless steel chassis for better recoil control and eventual faster target acquisition. The M&P9 M2.0 comes with and without the external manual safety. 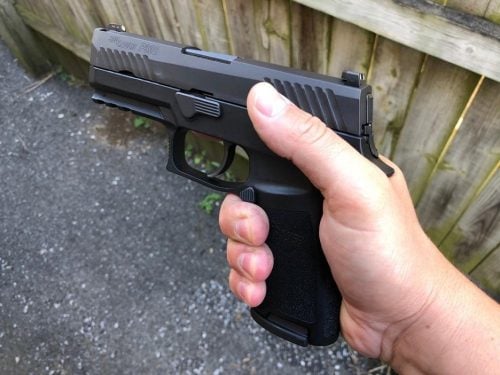 The Sig P320 is another striker-fired polymer pistol on our list. It’s extremely reliable and features interchangeable components so that you build your own Sig the way you want. The P320 features a removable fire control unit that can be placed in frames of different sizes. The model won the U.S. Army modularity competition and was adopted as a sidearm for the military. That fact speaks for itself.

The P320 is ambidextrous and has all controls operable from either side. There’s no external safety or decocking lever that could get caught on the clothes on the draw.

The full-size version is chambered in the 9mm and boasts a capacity of 17+1 rounds. The XSeries trigger is a flat-profile trigger that breaks at 90 degrees and ensures faster follow-up shots. If you need a Sig for concealed carry, consider the P320 Compact in 9mm with 15+1-round capacity. 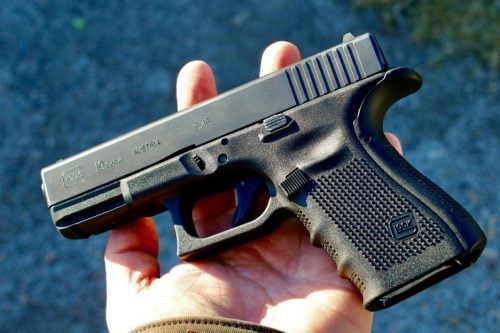 Having slightly truncated dimensions, the Glock 19 is a compact version of the full-size Glock 17. It’s extremely versatile and suits many application scenarios, from concealed carry to home defense. Its smooth profile aids a cumberless, snag-free draw.

The Glock 19 features the proprietary Safe Action System that ensures a consistent trigger operation and provides an internal 3-stage full-automatic safety that disengages only when the trigger is pulled. 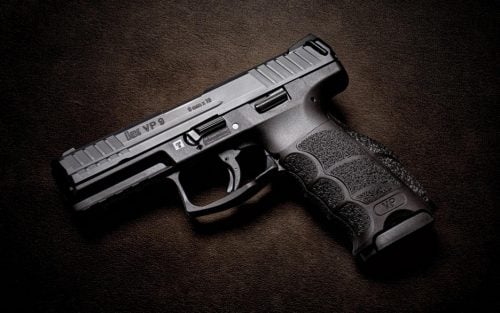 A standard magazine capacity of the Glock 19 holds 15 rounds, but you can increase it up to 33 rounds if your state doesn’t prohibit this. No wonder it makes the top-10 best-selling 9mm handguns in the U.S.

Being only the third striker-fired pistol ever produced by the Heckler & Koch company, the HK VP9 has become one of the most popular polymer-frame striker-fired handguns. One of the noteworthy things about this model is its excellent trigger feel and dynamics. Unlike in most striker designs that have the trigger increasing in resistance as the shooter pulls it rearward, the take-up of the VP9 trigger is smooth, yet still long, followed by a single-action style clean break and a short reset.

The grip of the HK VP9 is also great. It’s ergonomic and features changeable back and side straps. Charging the pistol is aided by aggressive forward and rearward slide serrations.

The VP9 is chambered in 9mm and accepts 17+1 rounds, though the versions with a mag capacity of 15 and 10 rounds are available as well. 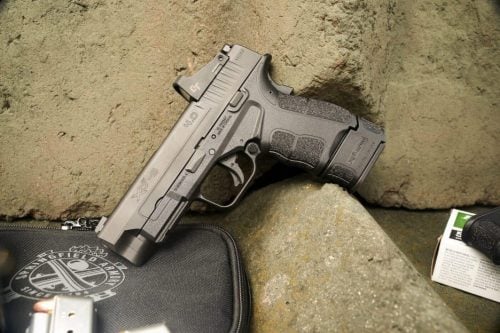 The XD-S MOD.2 with a 4-inch barrel is one of the best concealed-carry pistols in 9mm because it has a 0.9-inch wide single-stack design grip that won’t print. The original magazine accepts 7 rounds, but there is an extended 9-round option that gives more grip area for better control. The grip features a passive safety that disengages only when grabbed and ensures safe carrying.

A deep trigger guard undercut and an extended beavertail allow for better recoil management due to the higher gripping position.

In short, consider a semi-automatic pistol that meets the following criteria: