Best Xbox One bundles – Which one should you choose? 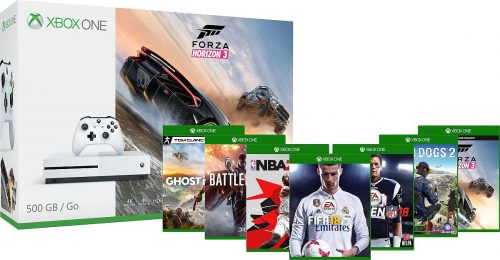 The Xbox One is one of the most powerful consoles in the world. But it will not come alone, being able to come with different games from the start. Which one should you choose? Here are our three tips to help you choose your Xbox One package.

Tip #1 for choosing your Xbox One Bundle: children?

On all consoles, many games are able to address children. On the Nintendo Switch, for example, Mario is great. But Microsoft’s console is not outdone. It also has in its catalog games that are perfect for younger children. For parents, this pack immediately gives ideas for occupying your children. And of course, many adults can also participate, giving fun family games. This is especially true since most of these games can be played online.

Pack Xbox One + Minecraft Creators: the game for young and old

Among the most popular of these games is the Xbox One Minecraft Creators pack. In addition to the Xbox One S, it includes this title that has a huge community of online players. Besides, the pack offers 14 days free trial to Xbox Live Gold, and 1 month trial to Xbox Game Pass. Regarding the game, which will be perfect for kids and parents alike, it also comes with 1,000 Minecoins, making the games start with a definite advantage. Minecraft Creators is the perfect game to stimulate the imagination, as it’s a world where you can create whatever you want!

Tip #2 for choosing your Xbox One Bundle: immersion fan?

If you choose one of the most powerful consoles in the world, it’s not by chance: it’s for the immersion it provides! But this choice is also made for the games. On this point, there is nothing like open world games. The principle: you are left in a universe where you can move freely. Titles like GTA V or TES V: Skyrim are two of the best known examples. Here, you create your own story, in a universe that is sometimes realistic or even fantastic.

The Assassin’s Creed series is a sure bet for people looking for limitless worlds. With this Xbox One Assassin’s Creed and Rainbow Six bundle, you get two very different games, each of which provides a lot of hours of play. If Assassin’s Creed: Origins lets you discover an ancient world, Rainbow Six: Siege lets you play as bandits and policemen. In an ultra-realistic world, you can either flush out hostage takers or loot banks: it’s up to you!

Tip #3 for choosing your Xbox One Bundle: sports fan?

The immersion being total with the One, Microsoft is able to offer games where the player’s action is itself very realistic. Imagine an ultra-perfect soccer game, where your actions result in goals worthy of historic matches. Games like FIFA 19 are known for their ability to capture the unique atmosphere of soccer matches. But of course, they are not the only ones that can capture memorable actions: other sports games are also available.

In this category of ultra-realistic titles and allowing actions worthy of a Hollywood movie, we count Forza Horizon. The concept is simple: drive ultra-fast cars in races that are just as fast. They are 450 to wait for the abilities of real drivers. In addition to the absolutely perfect graphic rendering, the title offers actions specific to the world of cars. So get behind the wheel right now and discover different cities around the world from a new perspective, day and night.

Our choice: the Xbox One + Fortnite

If there is a title that has marked the world of video games in recent years, it is Fortnite! It is a “battle royale”: you are launched on a map in open world. You will have to equip and arm yourself to eliminate all the other players present with you. Fortnite is thus one of the iconic games on Xbox One. Aimed at competitive video game lovers, this cheap Xbox One pack will test your nerves to the limit, despite its crazy and almost cartoonish atmosphere.

What you need to know about an Xbox One bundle:

How do you find a cheaper Xbox One bundle?

It all depends on the console and the services that the pack contains. Indeed, there are different versions of the Xbox One, and each has a price range. In the same way, an Xbox One pack with 2 controllers or with 2 games will logically be more expensive than another one including the bare minimum.

Interesting Related Article: “Xbox One sales better than PS4 in the US and UK in November“