The Next Bitcoin Bull Market May Already Be Underway

The new Bitcoin bull market is probably upon us right now. The recent price moves across the cryptocurrency space have barely reached the headlines of the mainstream newspapers, but the price of Bitcoin is already up more than 250% since its low in December 2018. Other cryptocurrencies like Ethereum have also followed suit, confirming the move.

Bitcoin Bull Markets of the Past

Bitcoin is a very volatile asset compared to classic investment assets like stocks and bonds. However, its major price surges in the past have been immensely profitable for those who participated and have now made fund managers like Paul Tudor Jones interested in Bitcoin.

There have actually been four Bitcoin bull markets in the past ten years, one in 2011 and two in 2017. All of these bull markets have led to more than 10 times gains. So, a new crypto bull market may be a great opportunity.

What’s Behind the Recent Rally?

When looking for a catalyst behind this recent rally, we can certainly find many hard pounding reasons for the crypto market to lit fire. Here are some: –

After the devastating Coronavirus outbreak, the stock markets across the world went into a downward price shock, and workers were laid off in mass due to the business lockdown.

In order to deal with the sudden economic downturn, governments worldwide released support programs and central banks printed money like never before. A printing effort that made the 2009-printing look like a Sunday picnic (see the chart of the money supply below). 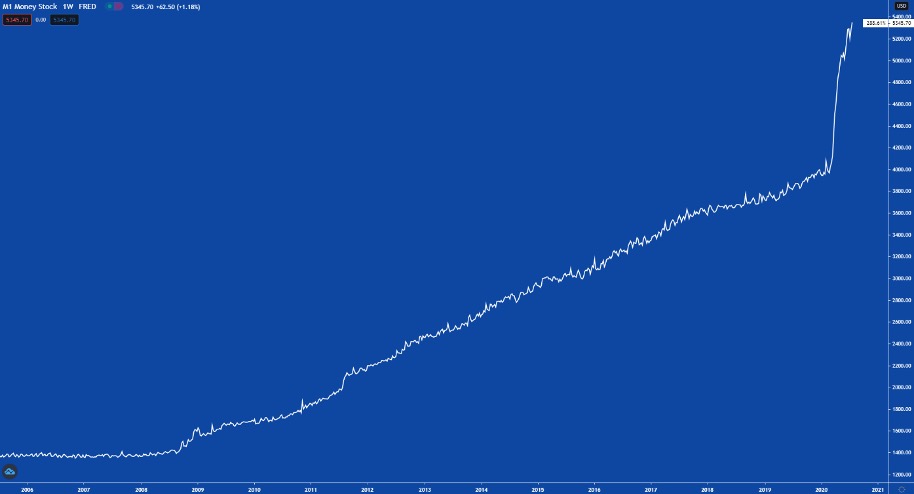 This may have led to people piling into cryptocurrency, and Bitcoin in particular, as well as gold and silver, to protect the purchasing power of their savings.

Meanwhile, the US dollar took a nosedive and had has problems recovering ever since. It has now broken the multi-year trendline, which may indicate that the trend is about to reverse (see the chart of the dollar index below). If so, this is a major tailwind for cryptocurrencies. 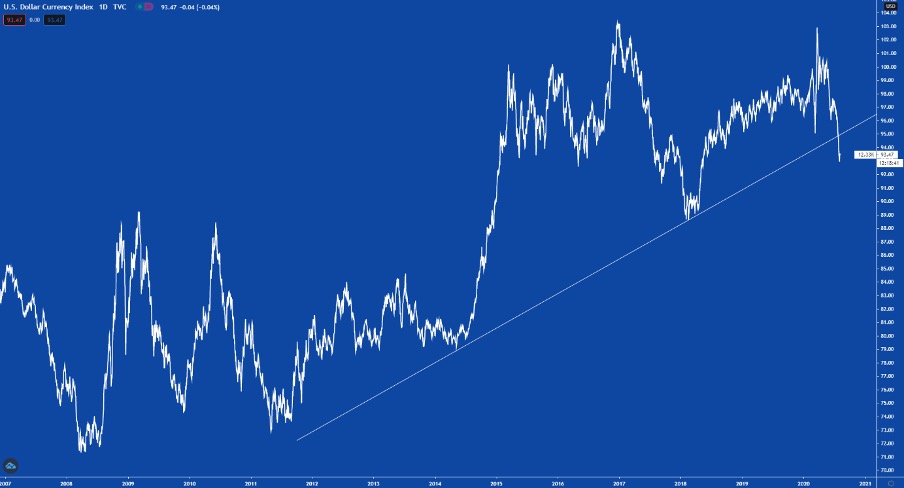 One of the more reliable and data-driven analysts, who calls himself PlanB on Twitter, has made a famous stock-to-flow model to value Bitcoin. Similar to valuing a commodity, he compares the existing stock of Bitcoin to the flow of newly mined coins yearly to come up with a potential price path.

It has been very reliable in the past Bitcoin bull markets, and more people are now wondering if Bitcoin reaching $100,000 is one of the more realistic scenarios.

With the Bitcoin halving, that halved the Bitcoin flow, just before the summer, it seems not to be coincident that the price starts to surge now.

After the stimulus checks, also known as the Economic Income Payments, were sent out on April 15, we saw a large number of new Robinhood trading accounts being opened. A good chunk of these stimulus dollars may have ended up buying Bitcoin and other cryptocurrencies.

How High Will the Bitcoin Price Go?

This question is on every Bitcoin bull’s mind. Many have made predictions and they may seem outlandish today. We hear prices like $50,000, $100,000, or even $1,000,000. What is actually realistic? If we were to believe the stock-to-flow model, $100,000 is not too unrealistic. Whatever the price may end up being, the price of around $11,000 today seems like a great point at which to buy Bitcoins.

Interesting Related Article: “What is Bitcoin?“