On your way to work today, you probably saw some sort of car accident, even if it was a fender bender in which nothing major happened. The IIHS (Insurance Institute for Highway Safety) says that in the United States, every 84 seconds a car crash occurs. Every 16 minutes, one of those car crashes results in a roadway fatality. In 2018, 33,654 people lost their lives in accidents. The ways in which those crashes occurred is infinite. More often than not though, they happen as a result of a few particular reasons. 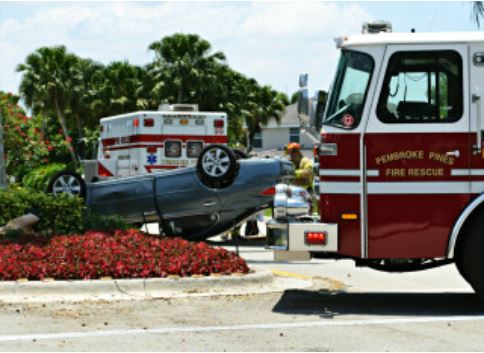 Traffic is always a huge variable when it comes to car accidents. The more cars there are on the road, the more accidents there will be. That fact is tough to get away from in extremely populous states and cities. Even more so however, most wrecks occur because of an outside source that could have been avoided. From drunk driving to running stop signs, auto accidents usually occur due to the following reasons.

The average mid-size sedan weighs roughly 3,300 pounds, or a ton and a half. Add in them being driven on concrete at average speeds of 50 MPH, and you get a certified death-machine. Distracted driving is the most common reason for car accidents throughout the United States. In 2015, there were almost 3,500 fatalities due to distracted drivers. The NHTSA believes that number is not even close to what it actually should be. Distracted driving accidents are among the most unreported roadway crashes.

Distracted driving is classified as anything from texting to eating a cheeseburger. Anything that may take your attention away from the road ahead of you falls under the umbrella of distracted driving. With the use of smartphones, texting while driving has become the number one contributor to distraction. People simply want to look at everything except for the road.

You can observe the distracted drivers around you every day. If you know you’re one of those people, stop for a moment and think about your family.

Driving under the influence has been a major issue for decades. No matter how much money is blown by the government on marketing advertisements warning about the risks, people continue to drive drunk every day.

Alcohol-impaired-driving occurs when drivers have a blood alcohol concentration (BAC) of .08 grams per deciliter or higher. In 2016, 10,497 people died in alcohol impaired crashes. That accounts for more than 28% of all driving-related deaths in the United States. To put it into perspective, somebody dies in an alcohol related driving incident every 50 minutes.

Even though the warning signs are everywhere, drivers continue to drive drunk daily. In a report done by the NHTSA, it found that alcohol related deaths and damages cost the U.S. $44 billion every year. All of these statistics are based on drivers with BAC levels of more than .08; they do not include those who were “buzzed driving”. Experts believe the numbers may be doubled if “buzzed driving” statistics were recorded.

In the 1994 film The Shawshank Redemption, Brooks famously said that “the world went and got itself in a big damn hurry.” He couldn’t have been more correct. Everyone is in a rush to go nowhere. Speeding in vehicles is one of the main causes of roadway fatalities.

While driving the proverbial death-machine known as a car, average speeds have proven to be deadly. Increase those speeds and the deaths become far greater. Reaction time is an enormous advantage when driving a car. Just like when you’re distracted and not looking at the road, speeding can greatly reduce your reaction time.

Speed limit signs are not designed as an estimate. They are a calculated number based on through traffic, pedestrian frequency, and the ebb and flow of the road.  Contrary to widespread belief, speed limits are not suggestions; they are the law. Regardless, people continue to speed and create more accidents on the roads.

Driving above certain speeds can fall under the category of reckless driving, but it includes many other things as well. Aggressive drivers who change lanes quickly and weave through traffic are a huge concern for roadway safety. They can cause deadly accidents much easier than a car driving legally would. Most of the time, reckless car accidents end in severe injury or death.

In excess of 13,000 car accidents each year are considered severe/major. Driving erratically causes one-third of all deaths in those severe car accidents.

Depending on where you live in the country, there is always some type of severe weather. In Florida, hurricanes and flooding are serious issues. In Wisconsin, blizzards and icy roads are the utmost concern.

The simplest way to see a steady decline in weather-related accidents is by people pulling over. If the weather gets too bad around you, stop the car and wait it out. If you don’t feel comfortable driving, get in the right lane and slow down the vehicle.

Going hand in hand with reckless driving, running red lights or stop signs can end tragically. Many people speed up when green lights turn to yellow, which is illegal. Always slow down when you see a light turn yellow. Also, make full-stops at stop signs, even if it’s a four-way stop.

In 2017, nearly 900 people were killed in crashes that involved drivers running red lights. While most of those deaths were pedestrians, it still creates thousands of motor vehicle crashes a year.

Teenagers are immature. They do not yet fully-understand the causes and consequences of their actions. Teens also have extremely limited experience behind the wheel. The NHTSA says that motor vehicle crashes are the leading cause of death amongst teenagers. Almost 2,000 drivers between the ages of 15 and 20 lose their lives every year.

As a parent to a teenager, try to teach them the safest practices possible. Teens have a mind of their own, but guidance will only help the cause.

Interesting related article: “There are more crashes when speed limits are set below recommendation.”