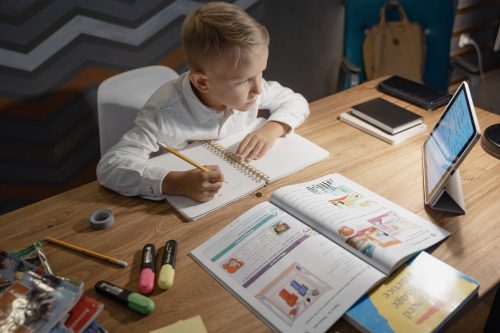 There is an interesting misconception about how learning as a process works in gifted children. There is an assumption that intelligence overrides the need for context around the topic they are studying. Yet Psychologist Bart Vogelaar discovered that even the most gifted group of children benefit from training and explanation.

When children have their learning abilities assessed or are tested at school, they don’t always show their full potential. Exam stress can cause a child to under-perform in this environment.

One way to avoid this issue is to adopt dynamic tests, where children receive training during the test and their progress is then measured. This provides a clearer picture of their learning capabilities.

If the assumption is that gifted children are always working to their full potential in these tests, then they would not require training or an explanation about the test topic. However, as development psychologist, Bart Vogelaar explains. ‘I’m not sure that assumption is correct.’

The test consisted of an initial assessment based on a series of tasks, after which the children were given a training session followed by a further set of tasks as a post-assessment follow-up.

As Vogelaar explained, “This kind of test gives a better insight into how well children learn because we are able to measure not only how much they progress on a new task, but also how much and what kind of help they need to achieve this progress.”

The test showed all groups of children made progress from the starting to the post-measurement. However, there were major individual differences between the two groups. As Vogelaar observed, “It confirmed that highly gifted children also benefit from explanation and training and that they don’t always show their full potential in tests.’ Vogelaar concludes from this that dynamic testing gives better insight into the reasoning capabilities and learning process of children – whether or not highly gifted – than conventional testing, such as with an IQ test.”

Training and Instruction For All

Interesting Related Article: “Inspiration for Creating an Ideal Learning Environment in Your Home“