Over the last few years, there’s been a huge shift in opinion about diesel cars. Being more fuel-efficient they were for many years seen as the better option for the environment than petrol models and incentivised accordingly.  However, since April 2018 the government started to put into place measures to discourage their use, with extra fees payable on older models that don’t meet the latest European emissions standards. Given this, are diesel-powered vehicles still a good investment? 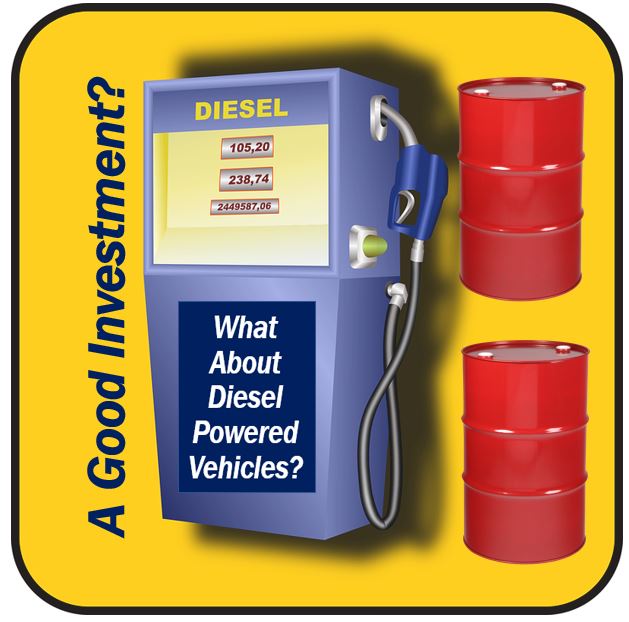 To some extent, it depends on what kind of vehicle we’re talking about, and what you’re going to use it for. Let’s consider several different types and uses.

The sale of new petrol and diesel-powered vehicles will be banned in the UK from 2030, but this doesn’t mean that they’ll disappear from the roads from that date. At present, in terms of fuel costs, it’s cheaper to run a diesel car than one which runs on unleaded petrol.

The UK  ban will only affect the sale of new gas- and diesel-powered vehicles starting in 2030, not used vehicles. However, the ban is being introduced 10 years earlier than initially planned, and many manufacturers are already phasing out their diesel models.

Although, to date, re-sale values don’t appear to have been significantly affected, there are other factors to take into consideration. Since 2019, it has cost an extra £12.50 a day (in addition to the congestion charge) to drive in  London’s Ultra Low Emissions Zone (ULEZ) started charging diesel models that don’t meet Euro 6 regulations.

If you live or drive in a city centre, the fact that Bristol has banned privately owned vehicles from some parts and others may follow suit in the coming years may be a consideration, as may higher congestion charges aimed at reducing pollution.

If you’re running a whole fleet of commercial vehicles for your business, fuel economy is likely to be a major consideration. Depending on your available facilities, bulk deliveries of diesel, which you store in tanks compliant with UK regulations could be a way to control costs, as you’d be buying at wholesale, rather than retail prices.

However, if you store 200 litres of fuel or more, you’ll have to observe the Control of Pollution (Oil Storage) (England) Regulations 2001. A reputable bulk fuel supplier will be able to advise you on exactly what you would need to install and maintain to create this facility. However, with regular deliveries, you could rely on your supplier to track your consumption and ensure you never ran low.

As these are intended for off-road use, they tend to rely on red diesel, aka farm fuel, or off-road fuel. This is identical to the ultra-low sulphur diesel (ULSD) you’ll find at your local garage, except that it’s been treated with a red dye to make it identifiable. Why? Because these it attracts a lower rate of tax and so is less expensive.

Red diesel is often sold in barrels, and can therefore be delivered at wholesale prices to wherever it’s needed. Diesel farm equipment which needs the additional torque diesel vehicles provide in order to tow or carry heavy loads, isn’t likely to be replaced by petrol or hybrid equivalents any time soon, so new models will represent a good investment for the foreseeable future.

Petrol equivalents struggle when fully loaded, especially when overtaking. In terms of economy, fuel (especially at wholesale prices) is cheaper, but of course, changes in government policy, such as excise duty and congestion charges over the coming years are unpredictable and are likely to have an impact on the value of your investment.

So let’s return to our original question – is a diesel vehicle still a worthwhile investment? Broadly speaking, the answer is yes – although this depends to a great extent on your needs and priorities. If you can access fuel at wholesale prices, or if red diesel will suit your needs, it’s especially cost-efficient.

The answer also comes with a couple of caveats: the future is uncertain due to changes in government policy which aim to discourage and then phase out the use of diesel cars over the next 10-15 years, and although new models comply with Euro 6 regulations, there will likely be increasing calls for petrol and diesel cars to be replaced by more environmentally sustainable alternatives.