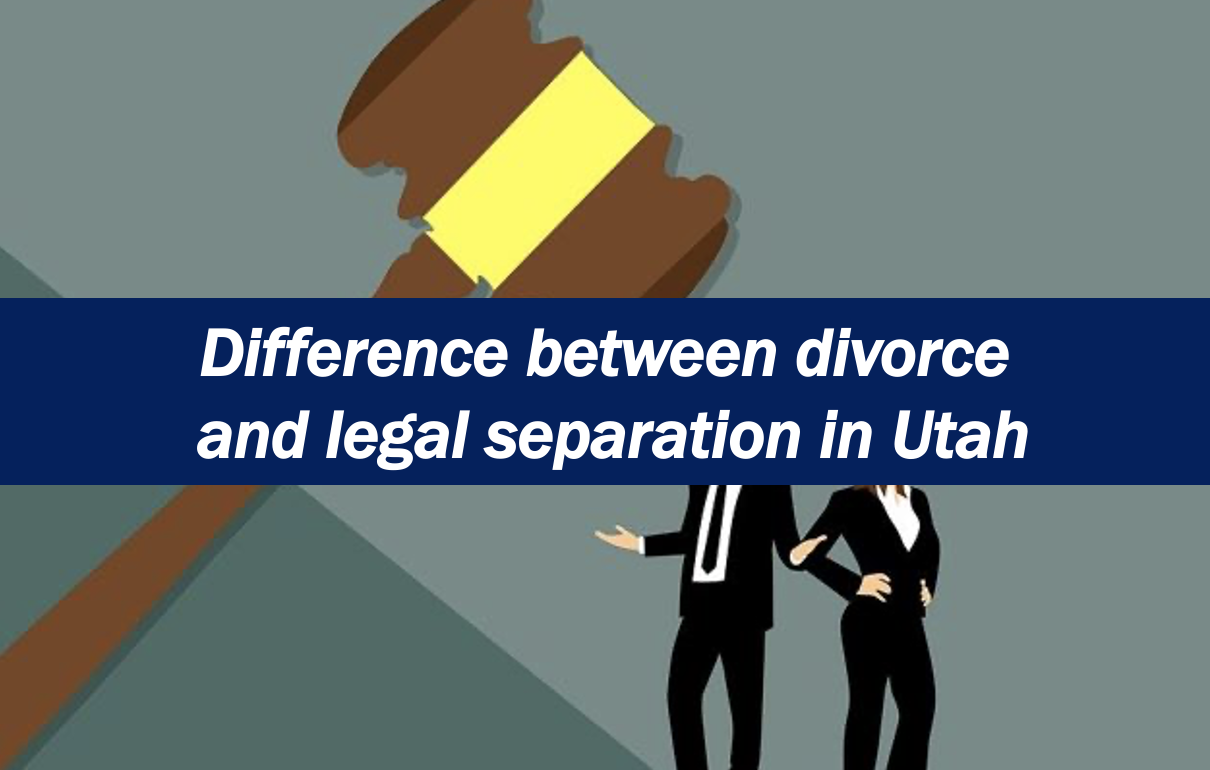 When a couple reaches a critical point in a relationship, divorce may seem like the only option. However, in Utah, spouses can keep the status of “married” and try to live separately for a year. A legal separation allows partners to preserve many of the benefits of marriage while living separately and apart as if they were divorced.

Both spouses should review the basic information before deciding which option is appropriate for them.

What Is a Legal Separation?

A legal separation is a court order that enshrines the responsibilities and rights of spouses while they are married but living separately and apart. This type of dissolution can help couples resolve financial and personal issues related to their marriage.

People choose legal separation as an alternative to divorce for reasons such as:

What Is a Divorce?

A divorce is the complete legal dissolution of a marriage by a court. Spouses lose any privileges that they had in their marriage and go through the process of separating assets and liabilities.

What Are The Differences Between a Divorce and a Legal Separation in Utah?

The first and foremost difference between these two proceedings is the final result. Upon a divorce, the court completely dissolves the marriage, and the spouses are no longer legally connected. However, when partners are separated, the couple is still married.

What is Similar Between Legal Separation and Divorce?

Legal separation and divorce processes are partly similar. During the divorce and the separation proceedings, the court decides the following:

How to Complete Forms for a Legal Separation or a Divorce in Utah?

When preparing separation or divorce papers, spouses can use lawyer’ services or the help of online divorce companies.

However, the spouses should consider that online divorce does not mean getting a court decision over the Internet. Instead, a divorce over the Internet means completing legal forms online without an attorney.

Web divorce is an inexpensive and quick way to select and fill out the necessary paperwork that meets the latest state requirements and the case specifics.

Online divorce platforms usually provide a package of documents only for uncontested divorce cases. Therefore, if the spouses still have unresolved marriage-related disagreements, they should resolve them first. The spouses can agree on their own or by contacting a third party.

Internet divorce also allows couples to have a do-it-yourself divorce. In a DIY divorce, the spouses refuse the services of a lawyer entirely and represent their interests in court on their own.

How to Apply for a Legal Separation and a Divorce in Utah?

There is no difference between filing for a divorce and a separation. First of all, spouses must fulfill the residency requirement to end their relationship in Utah officially. Under Utah Family Law, the petitioner or respondent must have lived in the state for at least 90 days before filing.

When couples have completed divorce papers online or with a lawyer, they should make two copies of the legal forms and submit them to the nearest county court. The clerk will check and stamp the papers, and if the package of documents meets all the established Family Law and state norms, they will submit it to the court for consideration of the case.

The petitioner must also pay the filing fees. If their income is low, they can file a waiver for payment. When the court accepts payment, the separation or divorce process officially begins.

Utah has a mandatory waiting period of 30 days from the date of filing. It means that the spouses will not receive a final decision before the end of this period. Usually, courts approve a divorce within 60 – 90 days due to workload.

Before applying for a divorce or a separation, spouses should remember that a mutual agreement on all breakup issues directly affects the length and cost of a divorce.

Getting a divorce is not the most pleasant thing, but you can make it less exhausting without scandals and accusations. Remember why you fell in love with this person. And even if the feelings are gone, you should find the inner strength to compromise for the sake of those past happy moments.

You may be interested in: When Should You Hire a Family Law Attorney?