Doctors have been using stethoscopes to listen to the internal sounds of the bodies of humans and other animals, i.e., auscultation, for hundreds of years. Thanks to stethoscopes, doctors and other health care professionals can listen to heart, breath, and bowel sounds.

René-Théophile-Hyacinthe Laennec (1781-1826), a French physician, invented the stethoscope in 1816. He invented the acoustic medical device because placing his ear on a female patient’s chest to listen to her heartbeat made him uncomfortable.

Dr. Laennec’s device was monaural, i.e., it connected to just one ear, as opposed to binaural, which sends sound to both ears. Irish physician and traveler of the world, Arthur Leared (1822–1879), invented the binaural stethoscope in 1851. One year later, George Philip Cammann (1804-1863) perfected the binaural device and effectively created a medical device that was more similar to our modern stethoscopes.

Dr. Cammann never patented his design because he believed it should be freely available for the good of humankind.

In 1945 came the Rappaport and Sprague device, in which two hearing tubes were located side-by-side before entering the chest piece. One side was for listening to the lungs and the other to the heart.

In 1961, Harvard Medical School Professor, David Littman (1906-1981), created a new stethoscope that was considerably lighter and had better acoustics than previous models.

Over the past few decades, this acoustic medical device has undergone several minor improvements. However, it was not until the advent of the digital stethostope that medical practice took a giant leap. 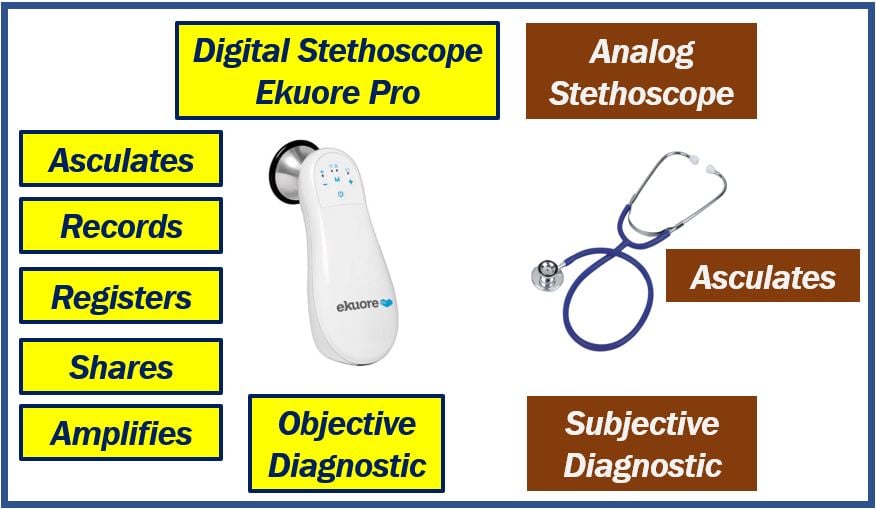 eKuore is a Spanish technology firm that designs, develops, and sells medical devices that connect with new mobile technologies. In 2018, eKuore launched a digital stethescope – the eKuore ONE – that digitizes and records auscultation sound through tablets and smartphones. It has also launched eKuore Pro.

On its website, eKuore says the following about its smart electronic stethoscope:

“It allows a joint listening, recording the auscultation for the diagnosis follow-up or sharing it easily with other professionals.”

This eKuore YouTube video shows how its digital stethoscope works.