Do Fish Finders Scare Fish Away? 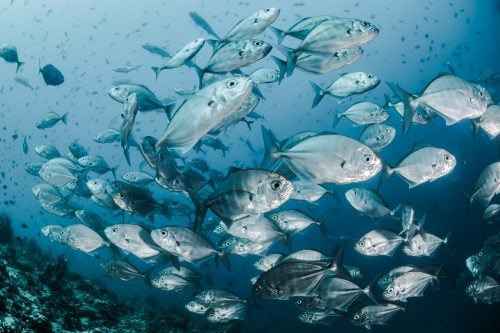 There has been much debate whether fish finders scare fish away. To fully understand this, you have to know how fish hear underwater and how sound travels.

Sound can travel faster and more efficiently underwater; however, it isn’t the same as we hear. Sound travels as vibrations.

With this, you can even ask, what sound does a fish make for them to know of each other’s whereabouts? Fish make sounds by oscillating swim bladders or by rubbing bones together where fins attach to the body.

There is a lot of evidence in both directions because we know that whales make noise, so surely fish can hear similar sounds from the sonar from a fish finder?

In our guide, you can find out, can fish hear sound and are scared away, or should you purchase the best fish finder for the money and know you can catch fish without worry?

Besides all the technical skills of baiting and casting, the most significant challenge any angler faces are where to find fish.

Many are happy to use their skill and intellect, yet there is an increasing number of fish finders used to find the best location.

What Is A Fish Finder?

Here you can get a basic overview of what a fish finder is and how does fish finder work. Finders are devices that send out high-frequency sonar sound waves into the water, which bounce off solid objects.

The device gathers reflected signals to process them. With the processed data, a visual image of under the water is shown.

The image provides an idea of where and the number of fish there are in your location. Fish finders offer more information such as speed, water temperature, and more.

Many fish finders can use more than one frequency to deliver the clearest and accurate image. Higher frequencies provide a narrow cone angle, yet more detailed images. Lower frequencies offer further depth penetration, yet the images are not as clear.

To fish in a shallow water depth, you’ll need a fish finder with a higher frequency of around 200KHZ to get the best detail level.

Such devices don’t produce enough noise or waves to make them detectable. Neither is the frequency the transducer transmits audible enough to scare or notify fish of danger.

Humans can hear a transducer because it is in the right range of 10HZ to 20HZ. Most fish don’t hear frequencies above 500HZ to 1KHZ.

Besides this, there are far louder noises underwater than the faint click of the transducer to scare fish away from your location.

How Do You Scare Fish Away?

A key tool for bass anglers is the fish-finder. Many pro anglers won’t use them when fishing in water shallower than 30 feet.

Many anglers reckon big fish can sense the transducer’s clicks, and they venture to water that is between 30 to 80-feet deep.

Although the noise is nearly inaudible, the click sound travels faster and efficiently through water than air, thus producing an unnatural noise.

Pro anglers find that there are lots of noises underwater that are far louder than any transducer clicks. Because of this, it is more beneficial to keep on your fishfinder than it is to turn it off.

You can find certain things that can easily scare fish away. Other boats or kayaks, you opening your tackle box and making a noise or the noise caused by baitfish, all these make more noise than your transducer.

Some anglers don’t consider the noise a bass makes when you are landing it. It will make lots of noise as a bass nears the surface and could be enough to scare fishes away, yet you can have repeat bites.

Not all transducers emit clicks so that fish may be alert with this type of fish finder. Even though a transducer may click, it could be the culmination of multiple fishfinders in a small area that magnifies these sounds to create this underwater noise from the frequencies of the sonar waves.

Do Boats Scare Fish Away?

Boats can scare fish away, although you can get some fish swinging into the side of a boat. Some species, such as carp, can be affected and can often be killed by the impact.

Boats can also scare fish off their spawning, yet there isn’t a definitive experiment that shows the impact of this. A slow-moving boat can have a more significant impact than faster-moving boats.

Noise pollution in heavily fished areas can be the largest issue for the fish. Experts believe this noise stops fish from hearing important biological sounds.

On the other side, it’s worth noting; some boat motors produce frequencies that attract fish, such as large diesel motors.

However, some boat guides use particular outboard motors to attract catfish on freshwater lakes. With this, many fish become accustomed to engine noise and are not scared away.

Once these motors stir up this sediment when traveling in shallow water, it can destroy plant life or interfere with insect life cycles and negatively impact fish.

Trolling motors are very different. Although they can have an extensive amount of thrust, this isn’t often used in shallow water.

If you search for fish in shallow areas, your motor will be running slow, and after a while, fish are accustomed to the whir of the electric motor.

One thing that does alarm fish with a trolling motor is repeated turning on and turning off the motor as there is a difference in sounds.

With all the above, you’ll find that using a trolling motor and the sounder from your fish finder to get to a spot where fish feed. You will get a bite more often than if you weren’t using your fish finder.

Interesting Related Article: “What is GPS (Global Positioning System)? How does it work?”