Do I have to go to court to resolve my business’s legal dispute? 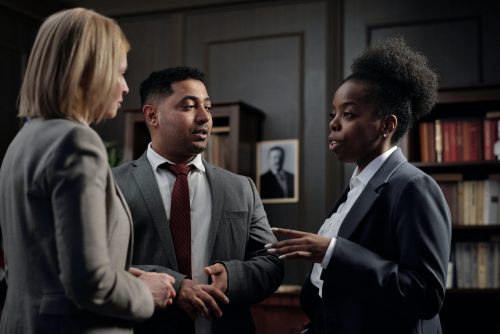 No one goes into business with the intention of spending the bulk of their time in court engaged in fighting or defending lawsuits but engaging in business can lead to disagreements and disputes with any number of parties along many avenues of potential conflict.

From contract disputes to toxic partnership deals to disagreements with suppliers and customers, there are a great many reasons why you might find yourself or your company in a courtroom.  Ideally, however, appearing before a judge is the last resort in terms of solving any business disputes you or your business might encounter.

Hiring the services of a qualified legal representative offers options short of the judges’ chambers, however. Engaging in mediation or arbitration provides a cost-effective way to resolve legal conflicts without having to bear the cost of a full-throated legal defense.

When used effectively, engaging in mediation or arbitration allows for a resolution of conflicts and disputes in a manner that is neither as adversarial nor winner-take-all stakes found before the judge’s bench.

If you are experiencing legal disagreements or disputes, let us explore the advantages of taking the less adversarial route afforded by the mediation process.

Is There a Difference Between Mediation and Arbitration?

Often used to together the terms “mediation” and “arbitration” reference two different legal proceedings that seek to obtain a similar goal.  With the goal of resolving a business-related dispute without resorting to ending up in front of a judge, each party needs to sit down and figure out how to resolve the dispute without going to court.

These two processes are mediation and arbitration, and there is a difference between the two procedures.  Let’s explore those differences so you can see the relative advantages of each process.  When considering the alternative of going to court, finding solutions that lay outside the judge’s jurisdiction has some excellent advantages.

Mediation is a Voluntary Process Allowing the Most Control

The goal of mediation is to open a line of communication in order to talk out differences of opinions and positions.  As an alternative form of conflict resolution, it offers perhaps the most flexibility in outcomes.  When in mediation, the two parties voluntarily choose to come to the negotiating table, with or without attorneys present, in the presence of a neutral third-party.

This third party is simply there to help facilitate a conversation between the two parties, explain differing viewpoints, and attempt to move the two positions closer together without the need to resort to legal coercion.

Less expensive and a lot faster than solving a dispute via the courtroom setting, the mediation route offers both sides a measure of control over the proceedings should they move into the more formalized setting of the courtroom.

A confidential proceeding that is far less intimidating than a formal courtroom setting, an agreed-upon mediation is an ideal vehicle for opening a dialogue designed to resolve thorny issues.  Should mediation efforts break down with neither side willing to give ground, an arbitration option might prove the best solution.

A middling ground between the extremes of a courtroom appearance on the one hand, and an informal mediation meeting on the other hand, is the arbitration meeting.  Whereas in the mediation phase of the conflict resolution process both sides retain control of the entire process to include who is in charge, who can participate, and other such details.

This freedom of decision-making and control is less expansive in the arbitration setting.

Much like the mediation setting, the arbitration process is voluntary, but you are agreeing to voluntarily give up your control in favor of a neutral third-party.  Again, unlike in the earlier setting where the third-party merely acts to facilitate a conversation, the arbitrator is offered the control as an, essentially, private judge for these proceedings.

While less formal than a courtroom setting, the arbitrator will set rules and conditions that must be abided by as each side presents their case, and the final decision of the arbitrator is deemed final and binding to each party that entered arbitration.

If you find yourself in a legal dispute in the greater Seattle and Tacoma areas, and you are seeking out solutions that do not require costly appearances in court, you will want a business attorney that is fully versant in engaging in mediation and arbitration as a viable option instead of going to court.  The Law Offices of Dickson Frohlich are standing by to handle an array of legal issues that might beset your company business.

Experts in all aspects and facets of business law, the legal team of Dickson Frohlich can help usher you through the mediation and arbitration process, but we will also stand in court and fight for your best interest should the need arise.  One of the best ways to avoid having to go to court is to have competent and experienced legal counsel by your side throughout the entire process from contract negotiation to the close of any business relationship.