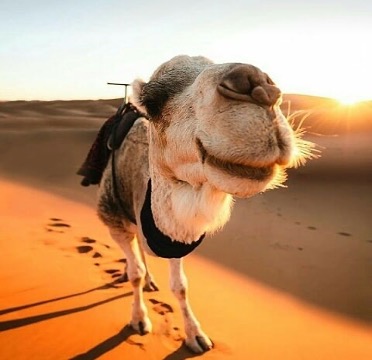 Erg Chebbi DesertAlso known as the Merzouga Desert, is the most visited desert in Morocco and a must stop on a trip to this country. The best way to have an experience is to sleep in a camp at the foot of the dunes, and here we will give you some tips on how to visit the Erg Chebbi Desert so you can plan your trip to this wonderful corner of Morocco.

The Erg Chebbi Desert is closest to the border with Algeria and is located in southeastern Morocco. It is one of the many small deserts that make up the great Sahara Desert, From Marrakech they travel just under 600 km along the route of the Thousand Kasbah, which passes through interesting points such as Ksar Ait Ben-Haddou, Ouarzazate, Todra and Dades Gorges. It would therefore be ideal to travel for a few days from Marrakech and visit all these places along the way.

Unlike Erg Chebbi, where the nearest town (Mhamid) is about 60km from the dunes, the first sand mountains of Erg Chebbi are a stone’s throw from two villages: Hassilabied and the most famous Merzouga (Sometimes this desert is known as the “desert of Merzouga”). And we say two steps, because it is so, many apartments and riads are right on the edge of the sand, and you can reach the middle dunes coming from your door. Below we explain more …

The Erg-Shebbi desert is about 22 km long and 5 km wide, with several groups of quite important dunes. To the south is the largest of them (Erg Chebbi) about 150 meters high, according to some sources, although the guide told us that he measured 250 meters.

To visit Erg Chebbi, there are two ways, which should not be exclusive: stay in a bed in a hotel near the dunes (both in the area of Hassilabide and in Merzouge), or pass the night in the camp.

As for a night in a hotel, it is important to know its exact location and that it is on the front line of the dunes. We stay at the Riad Kasba Ayur (which, by the way, is a passageway), which has the beginning of the desert at the door, and after about 25 minutes of walking we planted ourselves in a cool dune to see the sunrise. This is in the Hassilabied part and around this there are other good arrangements in the dune line. In the Merzouga area there are also many options to stay.

For those who want to spend the night in a desert camp, something to consider. During this 2019, the Moroccan government has been forced to move camps to the limits of the dunes, but not inside them. Apparently the damage to the ecosystem was quite severe, the groundwater used by the nomadic people was contaminated, and there was no control over garbage. So don’t expect to wake up surrounded by huge dunes all around you. Even so, they will usually always have a group of dunes where they can climb to watch the sunset and sunrise. However, try to know its exact location and use Google Maps (in satellite mode) to analyze if they are really close (the correct distance would be less than 1 km to some high dune).

Finally, you have to choose whether you want a standard camp or a luxury camp, The most notable difference is having a bathroom inside the store as well as other pijadits, probably better food, towels, etc. D. Our choice was Sahara Majestic Luxury Camp and the truth is that it was flawless.

There is a third option, more adventurous: camping with a tent in the middle of the desert, Since you can no longer set up permanent camps in the dunes, local agencies offer you to sleep in a tent, in a much more spectacular location, away from the noise of the drums and songs of the parties. Camps If you’re curious, it’s best to ask a few local tour operators.

to get to Merzouga Free is ideal is to rent a car. The location also makes it a great stage of the itinerary, whether you make the trip between Marrakech and Fès (about half way), and do the famous circular route with departure and arrival from Marrakech, passing through the Route of the Thousand Kasbah.

If you don’t want to rent a car, you can also arrive by bus, CTM and Supratours have many routes around the country. You can look at their websites/apps to see schedules, prices, etc.

The best months to tour the Erg Shebby Desert are October, November, March and April, Summer temperatures go above 40 degrees and in winter the nights get pretty cold.

We went in mid-September, and although we expended less heat than in Erg Chigaga, the temperatures were quite high. But when night came, I would venture to say it even managed to cool things down. If you are traveling in the winter, don’t forget warm clothes.