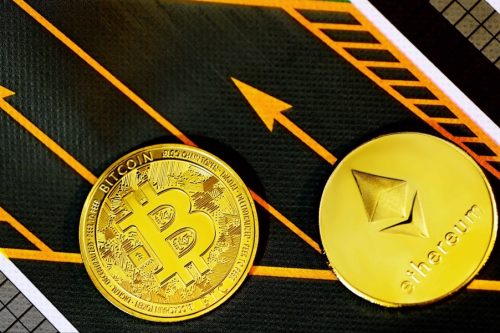 Bitcoin is the undisputed leader of all cryptocurrencies. Meanwhile, competitor Ether is considered the second-largest cyber currency. According to experts, the runner-up should be able to prevail over the crypto veteran in the long term.

Bitcoin or Ethereum: Who Has the Edge in the Long Term?

The cryptocurrency chart is flourishing. And even though new tokens are constantly finding their way onto various trading exchanges for the digital coins, little is happening on the winner’s podium.

With a market capitalization of about $753 billion (as of March 15, 2022), Bitcoin remains the undisputed largest cryptocurrency. Ethereum follows behind with a large gap.

The coin is currently worth around 2,600 US dollars and thus has a market value of 318 billion US dollars. Even though Ethereum is clearly behind Bitcoin, there is already speculation on the market as to whether the runner-up could knock the crypto legend off its throne.

Ethereum with Numerous Use Cases for Decentralized Finance

In the podcast “Bitcoin, Fiat & Rock’n’Roll”, which deals with the digital and physical currency market, an Exness broker recently explained that while Bitcoin and Ether are similar in structure, Ethereum could score points with its numerous functions and use cases.

Chief among these is the ETH blockchain’s smart contract capability, with the broker and Forex community saying it is likely to drive the decentralized finance sector in particular.

The belief is that Ethereum will ultimately have a more important role in the short-term/long-term than Bitcoin is because there are a lot more use cases that you can implement with Ethereum.

For example, it could be used to replace the entire financial system in its current form. Not only is Ethereum thus significantly more efficient than Bitcoin, but the cost of maintaining the architecture behind the coin is also likely to be significantly less expensive than that of the market leader.

On top of that, the Ethereum blockchain is also increasingly being used in the current buy/sell trend around non-fungible tokens (NFTs).

Not only does this allow crypto fans to purchase digital collectables of their favourite artists or tokens, but ownership of the tokens is also clearly defined and stored on the blockchain.

Ethereum Could Benefit from Sustainability Awareness

Dr. Larisa Yarovaya of Southampton Business School also believes Ethereum is superior to Bitcoin in many ways. Speaking to “CNBC” host Ryan Browne recently, the finance professor explained that the Ethereum blockchain is not only significantly more efficient, but also more environmentally friendly than the one underlying Bitcoin.

As a result, the researcher advocates that bitcoin be discontinued altogether, as she called for last year to the Financial Times. “Bitcoin could be the first inefficient version of a breakthrough technology,” Larisa Yarovaya told the financial publication. “It should die for the good of the planet and be replaced by a new model. It consumes more electricity than an entire country.”

According to the paper, the high energy consumption cannot be justified by the fact that some of the cryptocurrency’s value is rising sharply. “It is a speculative asset. [Bitcoin] does not create a significant number of jobs. It is not widely used for transactions.”

For her criticism of Bitcoin, the professor says she continues to earn criticism from the crypto community.

Ethereum could benefit further from environmental concerns about Bitcoin. The developers behind the associated blockchain architecture are working hard to make the platform greener.

“Ethereum is currently undergoing a series of upgrades that will replace mining with staking,” the project’s website states. “This will eliminate computational power as a security mechanism and reduce Ethereum’s carbon footprint by 99.95%.”

This means that in the long run, a transaction on the network could consume less energy than, say, a payment processed through credit card provider Visa. Greener payments via Ethereum will also not be introduced at the expense of crypto security and the blockchain’s decentralization.

Trading experts on Forex and Exness also predict a bright future for Ether. CNBC held out the prospect of the Ethereum blockchain acting as the “computer of the world” in the long term.

Thus, it is conceivable that various stablecoins, as well as widespread DeFi programs and games, will be built on the technology. Investing experts are also confident about the NFT trend with regard to Ethereum.

However, the development of these network effects is just in its infancy. The blockchain is currently struggling with high transaction fees. As soon as these are eliminated, nothing will stand in the way of the platform’s success.

According to crypto brokers, the price of the cryptocurrency could increase from $30,000 to $40,000. However, no one’s able to specify an exact timeframe for this price target.

While the “flipping” – the point in time when Ethereum’s market capitalization overtakes Bitcoin’s – is not currently in sight, currently Ether’s market value already accounts for about 42% of its big brother’s.

“The developments around decentralized applications on the Ethereum blockchain could further shorten the gap to the industry leader Bitcoin in the future,” financial analysts are convinced. “At the same time, Bitcoin has a pioneering effect, especially since the cryptocurrency is considered the first of its kind. Against this background, it acts as a classic exchange currency on many exchanges.”

On top of that, the strategist sees the oldest cryptocurrency at an advantage, especially in poorer countries that want to break away from their dependence on the reserve currency, the US dollar.

Therefore, it remains to be seen how the race between Bitcoin and Ethereum will develop in the future and who will come out on top.