What is a financial center? Definition and meaning

A financial center is an area where there is a high concentration of financial institutions. The area may be a city, county, or somewhere larger.

Financial centers have the best commercial and communications infrastructure where people conduct huge volumes of international and domestic trading transactions. The world’s most important financial centers are New York, London, and Tokyo.

Regional and national financial centers interact with the leading centers and may function as business feeders. They may also provide them with local access.

An offshore financial center is a smaller, lower-tax jurisdiction whose clients are mainly non-residents. We also refer to them as OFCs. OFCs do not have strict rules and regulations. 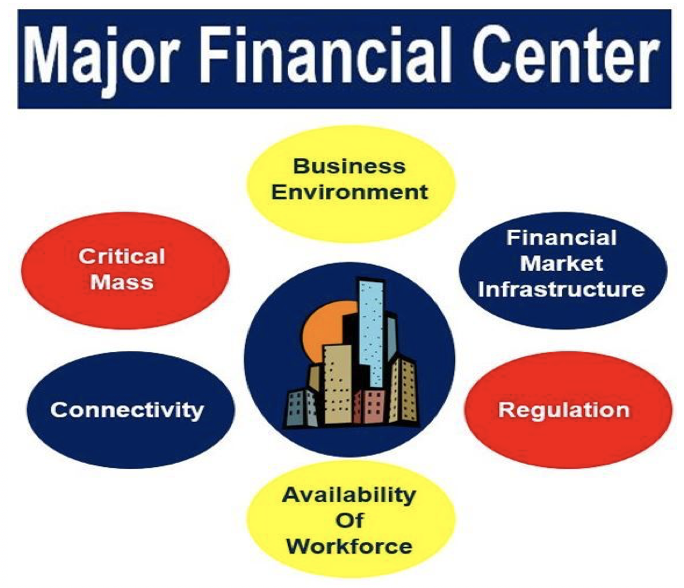 The Financial Times’ glossary of terms defines a financial center as a “city in which a large amount of a country’s financial transactions take place, and where the main exchanges are located.”

Participants in a financial center

In a financial center, there are institutional investors including investment managers. There are also financial intermediaries such as asset management funds, brokers and banks, and central banks.

Trading takes place at special exchanges and involves clearing houses. However, many transactions take place OTC, i.e. directly between participants. OTC stands for Over The Counter.

Companies that operate in financial centers offer a wide range of financial advisory services, such as those related to M&A. M&A stands for Mergers & Acquisitions. They also offer reinsurance, private equity, and several other areas of finance.

Financial center in a changing world

The financial center league tables are likely to change significantly over the next twenty years. This is because emerging economies like China and India are growing rapidly.

With progressive globalization and the increase in online trading, the need for financial centers will probably decline.

We can do things today from anywhere in the world that we could only do through an intermediary before. In other words, we do not need middlemen as much as in the past. As long as you have an Internet connection, you can do many things on your own now.

Experts predict, however, that the world’s three main centers will probably remain important regardless of the changes.

In Europe, financial centers began in 11th century England at the annual fair of St. Giles. Later, the Champaign Fairs emerged in France.

The City State of Venice hosted the first proper international financial center. In fact, it started off as a tiny entity in the 9th century and gradually grew. The center reached its peak in the 14th century.

English Common Law was the first globally to attempt to enforce regulations on the dangerous practice of fractional reserve banking.

The first two banks to function in a similar way to modern banks were Barclays and the Bank of England. They have been around since 1690 and 1694 respectively.

During this time, the City of London became an important financial center. Sir Thomas Gresham founded The Royal Exchange in 1565 as a center of commerce for the City’s merchants. It subsequently gained Royal patronage in 1571.

In the 18th century, London grew rapidly. This was due to a growing national population and the early stirrings of the Industrial Revolution. The city was also the hub of the mighty British Empire.

Throughout the 19th century, London (The City) was the world’s main business center. In 2008, it came first in the Worldwide Centers of Commerce Index.

Today, the insurance industry is focused around the City’s eastern side, around Lloyd’s building. Canary Wharf, 2.5 miles (4 km) to the east hosts a secondary financial district.

London today is the world’s largest center for foreign exchange markets, derivatives markets, and money markets. It also leader in the issuance of international debt securities, trading in precious and base metals, and international bank lending.

Since Britons voted for BREXIT, many fear for London’s future. BREXIT stands for BRitain EXITing the European Union. How many financial institutions will move across the channel to Paris or Frankfurt?

During the 19th century, Philadelphia was developing rapidly. In fact, it looked like it would eventually become the USA’s major financial center.

Unfortunately for Philadelphia, national politics erased its advantage in the 1830s and 1840s. This subsequently set the stage for New York to start establishing itself.

The first US stock exchange emerged in Philadelphia in 1790. In 1792, a group of New York traders met and considered setting up a security business. These twenty-four men were the founders of the New York Stock Exchange.

In 1817, the New York merchants were not happy about the state of their stock exchange. One of their members went to Philadelphia to see how trading was done there.

The merchant returned to New York and reported on what he had witnessed in Philadelphia.

Not long after, the twenty-four men established the New York Stock and Exchange Board in Wall Street.

From a troubled beginning, the NYSE turned into a Goliath of a trading area. Today, billions of dollars worth of stocks and bonds change hands in the NYSE each day.

New York City’s financial center occupies an area in the island of Manhattan, specifically around Wall Street. It is a 0.7-mile-long (1.1 km) street running eight blocks. Locals call the area the Financial District of Lower Manhattan.

In other words, when somebody says Wall Street, we think of America’s financial community.

The USA is home to the two largest stock exchanges in the world by total market capitalization: 1. The New York Stock Exchange (NYSE), and 2. NASDAQ (National Association of Securities Dealers Automated Quotations).

This City of London video explains what it takes to turn a district of a city into a major financial center.