Good laboratory practice is not only concerned with production, but also quality control.

“The principles of Good Laboratory Practice (GLP) promote the quality and validity of data generated in the testing of chemicals and prevent fraudulent practices.”

Non-clinical good laboratory practice also refers to experimental research. The term refers to a quality system of management controls for laboratories where research is taking place. 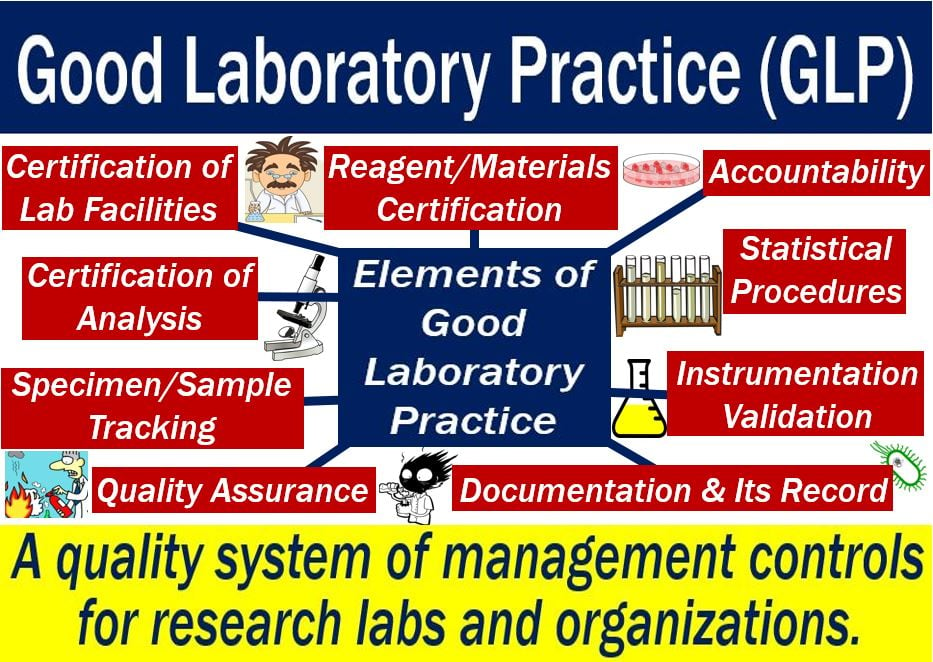 According to LabCompliance: “Good Laboratory Practice (GLP) deals with the organization, process and conditions under which laboratory studies are planned, performed, monitored, recorded and reported. GLP practices are intended to promote the quality and validity of test data.”

Included in the term ‘chemicals’ are substances and molecules that the pharmaceutical industry creates. In other words, substances we use when creating medications.

In 1972, New Zealand was the first country to introduce good laboratory practice. The United States subsequently followed in 1978 after the Industrial BioTest Laboratories (IBT Labs) scandal.

IBT Labs had been engaging in extensive scientific misconduct, including fraud. IBT Labs’ President and several top executives were indicted.

Today, all OECD countries follow the Principles of GLP, as do many other nations across the world. OECD stands for the Organization for Economic Co-operation and Development.

“Applies to non-clinical studies conducted for the assessment of the safety or efficacy of chemicals (including pharmaceuticals) to man, animals, and the environment.”

Do not confuse the term GLP with Standards for Laboratory Safety, which is all about wearing the right gloves, glasses, and clothing.

GLP in the USA and EU

The United States Food and Drug Administration (FDA) has GLP rules in 21CFR58. In the US, people carrying out preclinical trials on animals use these rules. The FDA is America’s regulatory agency for medications, medical devices, food, cosmetics, and tobacco products.

In other words, researchers follow the rules before carrying out clinical research on humans.

Since 1987, the European Council has adopted two basic Directives as well as a Decision related to the application of the GLP principles.

The rules and regulations regarding good laboratory practice in the EU apply across the whole economic bloc. Therefore, if a laboratory complied with the rules in one country, its processes are valid in all other EU member states.

When BREXIT happens, Britain will need to establish a relationship regarding GLPs with other countries. It will probably keep its current EU rules, and subsequently find a way of remaining within the EU umbrella. BREXIT stands for BRitain EXITing the European Union.

In this Standards Canada video, Adrien Musuku, Director of Biopharmaceutics for Pharmascience, talks about GLP. Specifically, he talks about the SCC’s GLP recognition program. Pharmascience’s headquarters are in Montreal, Canada.