What is a Millennial? Definition and meaning

A Millennial is a person who was born from the early 1980s to the early 2000s. However, the term is used flexibly and has several different starting and ending birth years.

We also refer to it as Generation Y. It is a demographic cohort that follows Generation X. Echo Boomers, thus called because they are the offspring of the Baby Boomers and part of the considerable increase in birth rates from 1982 to 1995, are also synonymous with Millennials. Some people refer to the Millennials as the Me Me Generation – this derogatory term is more common among Baby Boomers.

In fact, there are several terms that are synonymous with the Millennial Generation (see the image below).

The term ‘Millennial’ was first used by authors Neil Howe and William Strauss (1947-2007) in their work on social generations and for the Strauss–Howe Generational Theory. They coined the term in 1987, at about the same time that children born in 1982 were starting pre-school, and the media was first writing about their impending link to the new millennium as the high school graduating class of 2000.

The term Generation Y was first used by Ad Age in 1993 to describe children aged up to 11 years.

Millennial Generation and the media

Most tabloids stereotype Millennials as lazy, needy, whiny, self-absorbed, tech-immersed, narcissistic individuals who demand instant and constant gratification, and have lost the art of conversation. This is frequently blamed on overprotective and indulgent parents who do not let their offspring grow up.

However, if those tabloid journalists were asked to present evidence showing that Millennials are not self-expressive, liberal, open-minded, upbeat and overtly passionate about equality, they would probably fail.

Sociologists say that the stereotyping of millennials is nothing new. Ever since humans first walked the Earth, there has always been a generation gap.

According to Dictionary.com, the Millennial Generation is:

“A term used to refer to the generation, born from 1980 onward, brought up using digital technology and mass media; the children of Baby Boomers; also called Generation Y.”

It is common to hear Baby Boomers say that the Millennial Generation has lost the art of conversation. Doesn’t that depend on the definition of conversation? If I am text-chatting with a friend using my smartphone, am I not conversing, or does it have to be face-to-face?

Some demographers (they study the characteristics of human populations) say the Millennials started in the late 1970s to 1994, while others insist they were born between 1977 and 1995.

The Pew Research Center, based in Washington D.C., a non-partisan ‘fact tank’ that provides information on public opinion, social issues and demographic trends, defines Millennials as those aged 18-34 in 2015.

Demographers Neil Howe and William Straus say that a Millennial is any person born between 1982 and 2004. Dr. Howe described the dividing line between a Millennial and a Generation Z individual as ‘tentative’, saying: “You can’t be sure where history will someday draw a cohort dividing line until a generation fully comes of age.”

Dr. Howe noted that the Millennial’s range starting in 1982 would eventually lead to the next generation’s window beginning between 2000 and 2006. 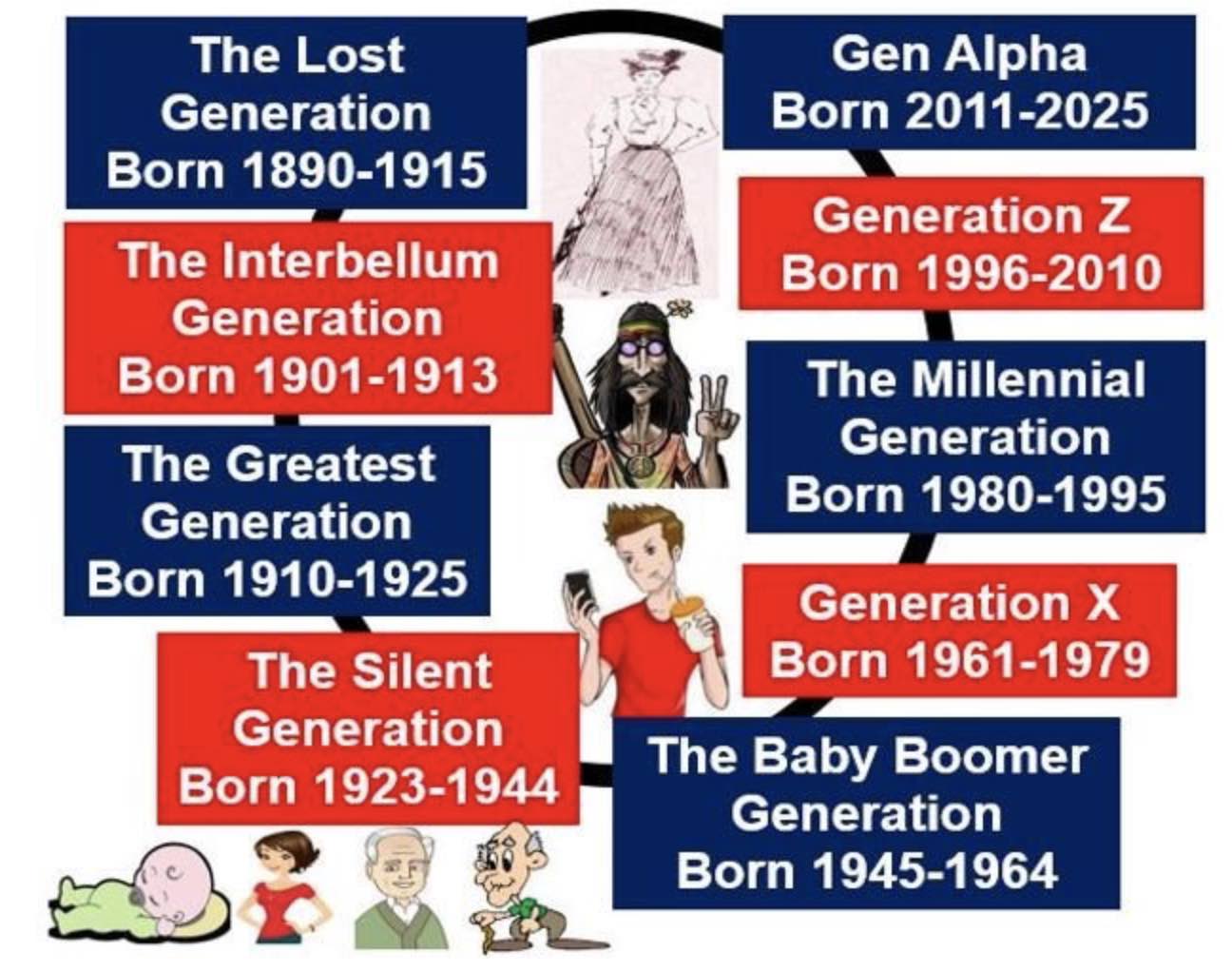 A new generation always has features and behaviors which previous ones find distasteful or shocking. The emergence of jazz music was widely criticized in the 1920s, as was Elvis Presley in the 1950s, long hair for men and the hippie-flower-power movement in the 1960s. Today, there is alarm about smartphone addiction.

Characteristics of a Millennial

Millennials are currently the most-studied generation. While many of their features are the same as those of other generations – we are all humans after all – there are some differences:

– Patience: many of them came of age during a recession, in a tough job market. The general economic environment has been much more unpredictable compared to what Baby Boomers had to face when they came of age.

Millennials take longer ‘finding themselves’ during early adulthood, and reach milestones – marriage, becoming parents, owning a home – later than Baby Boomers did. In fact, a sizeable minority or small majority of them – depending on which country’s population we are looking at – may never get married.

On the other hand, because of the high-tech environment they were brought up in, they are used to instant gratification and recognition, which sometimes can make them crave for things immediately, which is the opposite of being patient.

– Money Matters Less: the majority of Millennials say they would prefer to earn $40,000 per annum working in a job they love than $100,000 in one they detest, according to an article in Parade.com.

A typical Millennial craves to be able to work when, where and how he or she wants in order to balance the demands of work and life. Unlike Baby Boomers, many will even consider taking a reduction in pay or foregoing promotion in order to get it. Morley Safer (1931-May 2016), a Canadian-American broadcast journalist, reporter and CBS News correspondence, once said: “The workplace has become a psychological battlefield and the Millennials have the upper hand, because they are tech savvy, with every gadget imaginable almost becoming an extension of their bodies. They multitask, talk, walk, listen and type, and text. And their priorities are simple: they come first.” (Image: Wikipedia)

– Liberated Thinkers: half of all Millennials say they do not favor any political party or inclination – they are floating voters. Thirty percent say they are not affiliated with any organized religion. Most of them are in favor of gay marriages and believe that same-sex couple’s should have the same rights to have or adopt children as heterosexual couples. Baby Boomers were quite different.

– Academically Slipping: even though Generation Y individuals have had the most schooling in the history of the United States, they rank below their counterparts elsewhere in the world in literacy, numeracy (math), and a vital skill for the modern world: ‘problem-solving in technology-rich environments’.

– Multitaskers: Millennials are multitasking experts and can juggle several responsibilities simultaneously. However, this also means that they are distracted easily and find texting and social media difficult to resist. Chelsea Clinton, daughter of former US President Bill Clinton and former US Secretary of State Hillary Clinton, once said: “Millennials are often portrayed as apathetic, disinterested, tuned out and selfish. None of those adjectives describe the Millennials I’ve been privileged to meet and work with.” (Image: Wikipedia)

In the United States, the Millennials grew up and started their careers at a time when:

According to the study researchers:

“This is the highest share in at least four decades and represents a slow but steady increase over the 32% of their same-aged counterparts who were living at home prior to the Great Recession in 2007 and the 34% doing so when it officially ended in 2009.”

One third of Millennials who still lived with their parents in the US in 2012 were college students.

A typical Millennial male is much more likely to be living with his parents than a female of the same age – 40% and 32% respectively.

The report authors believe the growing trend is due to the following factors:

– Fewer Have Jobs: the number of young adults with jobs has declined in 2007.

– Further Education: in March 2012, thirty-nine percent of younger Millennials were in college, compared to 35% in 2007.

– Fewer Marriages: in 2007, about 30% of young adults were married, compared to just 25% in 2012. This trend has continued. Within the next couple of decades, the majority of Americans younger than 40 years are likely not to be married.

“Looking at longer term trends, the analysis finds that the share of young adults living in their parents’ home was relatively constant from 1968 (the earliest comparable data available) to 2007, at about 32%. However, other household arrangements of young adults changed dramatically during this period.”

This Our Unilever video challenges the stereotype description of millennials as the ‘Me, Me, Me” generation, and shows how all over the world they are achieving incredible things for a bright future.