What are ratings? Definition and meaning

Ratings in the world of business has several meanings – the two main ones are 1. It is an assessment of an investment’s risk, the ranking of, for example, bonds, debentures, notes and other debt securities by bond rating agencies by the creditworthiness, earnings record and financial stability of the issuer. 2. An expert’s or analyst’s recommendation on whether to hold onto, sell, or purchase a specific stock.

Ratings may also refer to the percentage of total potential audience that chooses one media vehicle over another. In broadcast media, it refers to the number of individuals or households that had their televisions or radios tuned into a particular channel, station or program.

The Financial Times’ glossary of terms says the following regarding credit appraisals:

“Also called debt rating, this is a method of measuring the creditworthiness of a debt issuer. The ratings provided by the main credit rating agencies, Moody’s Investors Service, Standard & Poor’s (S&P) and Fitch, evaluate issuers worldwide and are very closely followed.”

“A top rating means there is almost no likelihood of the borrower failing to meet interest payments or full redemption of the issue.” 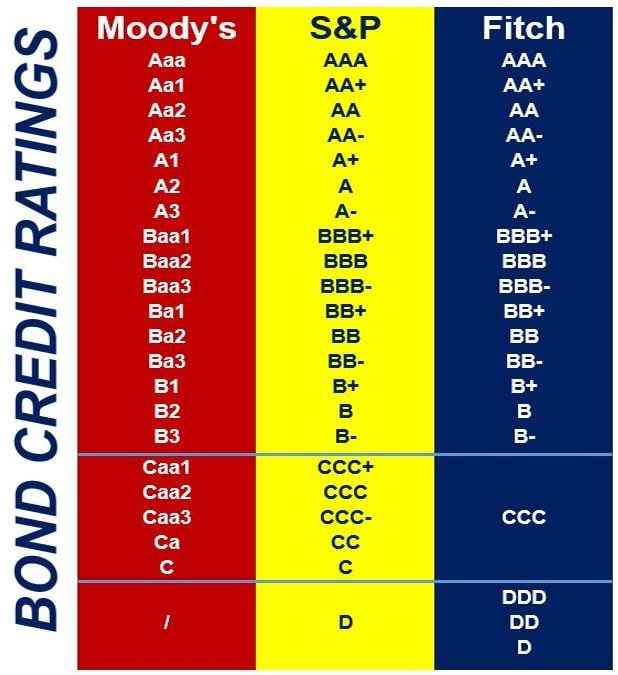 The bond ratings of the ‘Big Three’. Securities issuers’ debt interest rates depend almost entirely on how these three mega-influential agencies rate them.  AAA is the lowest risk, while D means the issuer has defaulted.

The bond credit rating represents the creditworthiness of government or corporate bonds. It is different from a private individual’s credit score.

Credit rating agencies publish the ratings, which are used by investors and investment professionals to assess the probability of the debt being repaid.

The two largest credit rating agencies in the world are Standard & Poor’s and Moody’s Investors Service, both based in New York City. Combined they have approximately eighty percent of the global market share.

Fitch Ratings, which is also based in New York City, is the third largest. The top three have a 95% share of the global market. 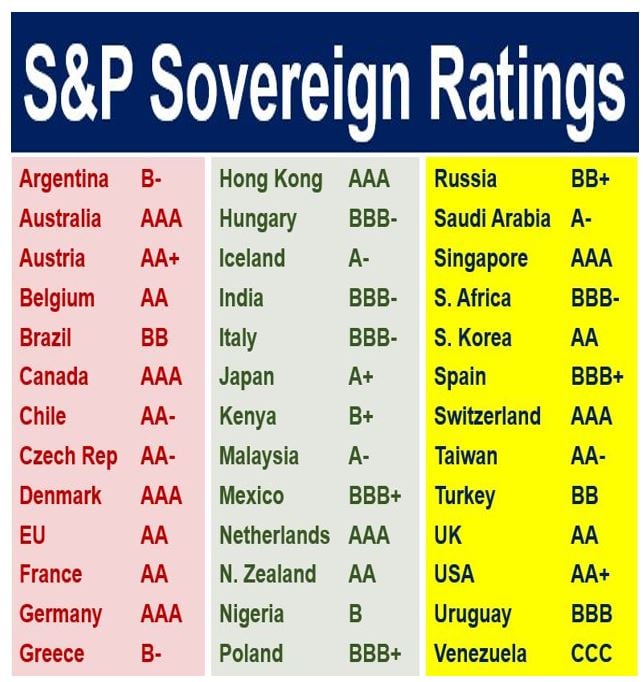 Since the global financial crisis of 2007/8, several top-rated countries have slid down in the sovereign rankings league table – the UK, USA and France are no longer AAA. (Data Source: tradingeconomics.com)

Bond ratings are listed in different tiers, ranging from ‘AAA’ – which is classed as ‘Prime’, meaning ‘minimum risk’ – to ‘D’ – which means ‘In Default’.

While Standard & Poor’s (S&P) and Fitch use the plus and minus (+ -) signs and upper case letters in their valuation grades, Moody’s adds a 1, 2 or 3 to the end and uses a combination of lower and upper cases.

If a bond’s credit ranking is BBB- (Baa3) or higher, it is considered IG or Investment Grade. Generally, banks are allowed to invest in these bonds because the credit agencies believe they are safe bets.

How much commercial enterprises, governments and other entities that issue debt have to pay to access the credit markets – the interest rates they have to pay – depends mainly on the grades they receive from these three agencies.

A bond that is not rated as IG is known as a high yield bond or junk bond.

Up to the early 1970s, bond credit agencies were not financially linked to the companies and governments that they rated – their income came from investors who wanted neutral and impartial data on the creditworthiness of securities issuers.

However, in the early 1970s, the ‘Big Three’ began to get paid by the securities issuers they were rating, which logically led to charges that their 100% neutrality had been compromised.

Critics have claimed that securities issuers shop for the best ratings from the Big Three, in order to entice investors, until at least one of the main agencies delivers favorable ratings.

The subprime mortgage crisis, which started in 2007, was partly caused by this arrangement between securities issuers and the agencies that rated them, critics claim. MBSs (mortgage-backed securities) and CDOs (collateralized debt obligations) were rated highly by these credit rating agencies, which meant that investors poured their money into them.

A firm that gathers people’s and businesses’ payment and credit histories is called a credit bureau. They rate them according to their creditworthiness by giving each person or company a credit score.