What are tariffs? Definition and meaning

Tariffs are taxes or duties (customs duties) that are levied on imported goods. The aims are either to increase the prices of the imported products to at least the level of the current domestic prices, or raise revenue for the government.

Tariffs along with quotas – limiting the quantity of imports coming into a country – are two weapons that countries use to both protect their domestic producers and improve their trade balance.

Tariffs may also be applied to exported goods. Some countries tax grain exports in order to prevent a shortage at home.

Tariffs are one of the most pervasive and oldest forms of trade protection, often described as a barrier to trade.

According to the World Trade Organization (WTO):

“Customs duties on merchandise imports are called tariffs. Tariffs give a price advantage to locally-produced goods over similar goods which are imported, and they raise revenues for governments. One result of the Uruguay Round was countries’ commitments to cut tariffs and to “bind” their customs duty rates to levels which are difficult to raise.”

“The current negotiations under the Doha Agenda continue efforts in that direction in agriculture and non-agricultural market access.”

The World Trade Organization is a forum where its more than 165 member states solve their international trade disputes. It lays down the rules and regulations for trading between nations. 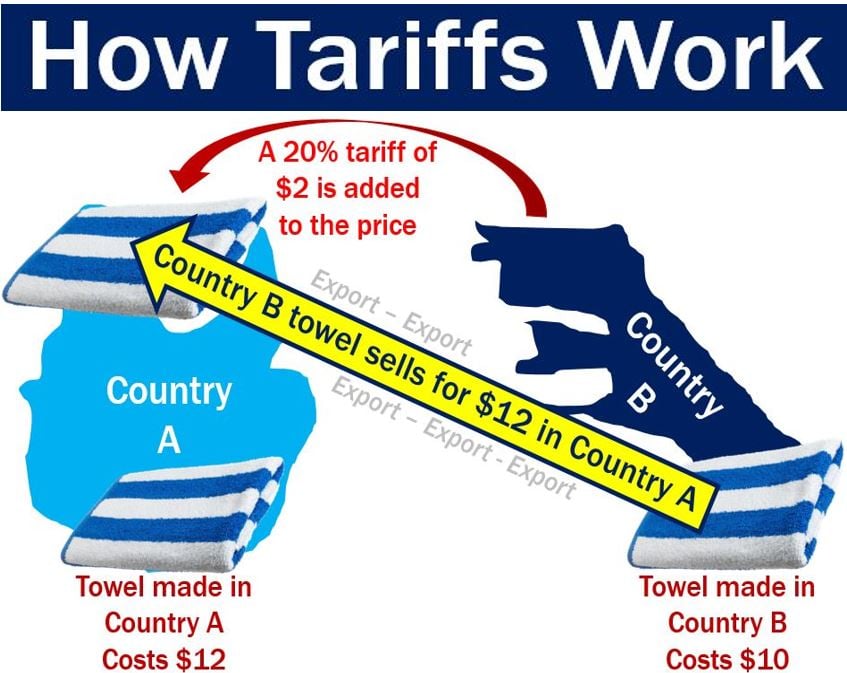 As you can see in this image above, Country B can make towels more cheaply than Country A. So Country A’s government imposes a 20% tariff on all towel imports from Country B. Supporters of the tariff – all of them from Country A – say that the tax helps protect domestic towel makers. Opponents argue that because of the tax, consumers in Country A have to pay more for towels than they should, and that towel-makers in Country A have no incentive to improve productivity.

– Protective Tariff: used to push up the price of imported products as a protective measure against foreign competition, i.e. the purpose is to help domestic suppliers compete more effectively in the home market.

– Prohibitive Tariff: the tax is so high that it makes an import far too (prohibitively) expensive. The aim here is to completely discourage importers from bringing the product into the country, because they would find it impossible to sell.

– Ad Valorem – the tax applies to a percentage of the imported good’s value. For example, an ad valorem of 10% would mean that a product costing $100 would sell in the market of the importing country for $110.

– Specific Tariff: rather than taxing according to the product’s value, the tax is based on the specific amount – which could be the good’s weight, number, or other measurement. 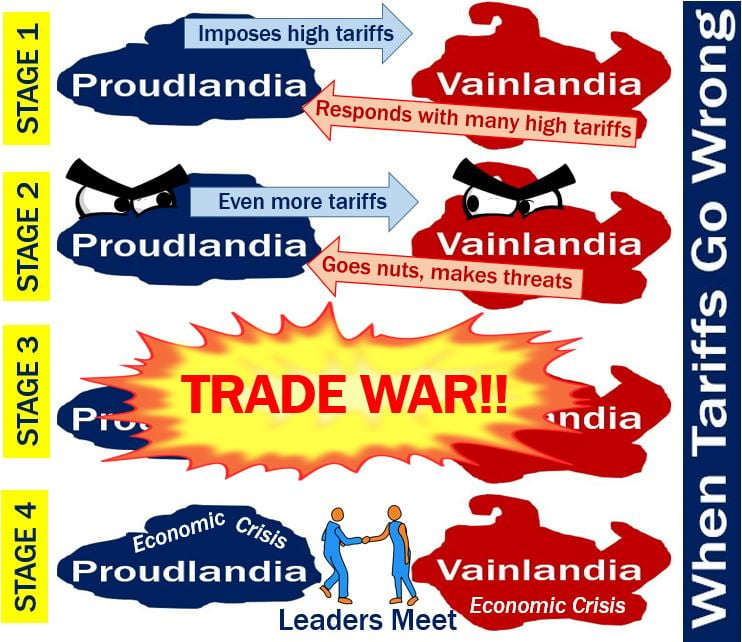 Banging the nationalist drum is very tempting for politicians during election campaigns. Telling people that there is a problem abroad that needs sorting out can win lots of votes. However, policy makers should be aware that other countries can also impose tariffs. Trade wars have never made any nation rich.

Etymology is the study of the origin and evolution of the meanings of words. An etymology specialist is called an etymologist.

According to the Online Etymology Dictionary, the noun Tariff appeared in the English language in Britain in the 1590s, with the meaning “arithmetical table” and “official list of customs duties on imports or exports; law regulating import duties”, which came from the Italian word Tariffa meaning “assessment, tariff, price.”

The Medieval Latin word Tarifa meant “book of rates, list of prices” – it came from the Arabic Ta’rif”, meaning “notification, information, a making known; inventory of fees to be paid.”

Some people credit the small Spanish town of Tarifa in Andalusia as being the origin of the term ‘Tariff’ in English. It was the first port in Europe to charge merchants for the use of its docks.

In most countries, international travelers are allowed to bring goods into the country duty-free – free of tariffs. These products are bought at airports, ports or in a country where those goods are tax-free, and then brought into another country duty-free.

There is usually an allowance which limits how much – in numbers, weight or value – of duty-free goods a traveler can bring into the country.

These limits are typically applied to wine, spirits, tobacco, cosmetics, souvenirs, and gifts. Diplomats and UN officials are entitled to carry duty-free goods without any limits.

In most of the advanced economies, policy makers go back and forth on whether tariffs are a good or bad thing. When a domestic sector feels threatened by foreign competition, or unfair practices abroad, it will ask lawmakers to impose tariffs on certain imports.

In the short-term, tariffs help specific industries, which generally create more jobs or protect the ones that currently exist.

However, tariffs also raise the prices of imported goods, which is not good for consumers. There is always a trade-off between industry and employees versus consumers as far as tariffs are concerned.

Tariffs also carry risks – other countries may retaliate and trade wars could ensue. Trade wars are bad for everybody’s economy.

Countries that import and export lots of goods and services are considerably wealthier than protectionist nations.

“Many countries have reduced tariffs as part of the process of freeing up world trade.”

In some regions of the world, countries get together and form customs unions. The EU Customs Union is the world’s largest. Member states can trade freely with each other with no tariffs or quotas.

Video – What are tariffs?