What is a voucher? Definition and examples

The meaning of the term – there are many – depends on the context in which it is used.

When they are receipts, vouchers are used as evidence that certain services have been performed or payments have been made.

Voucher in the English language

According to the Online Etymology Dictionary, the term first appeared in the English language in Britain in the 1520s with the meaning ‘summoning of a person into court to warrant the title of a property – a calling to vouch.’

In the 1690s, also in Britain, ‘voucher’ was first used with the meaning ‘receipt from a business transaction’. It was not until 1947 that the word’s meaning widened to include a ‘document that can be exchanged for goods or services.’

In 1590s Britain, the term first emerged in the English language with the meaning ‘guarantee to be accurate or true’.

The majority of people will tell you that the two terms have virtually the same meaning and can be used interchangeably. They are probably right.

However, a true linguist will inform you that although they are used today with the same meaning, technically there is a difference.

– Vouchers: these are meant to be given to customers as one-off offers for discounts or total payment for something, such as a meal. The piece of paper – or code in the paperless world – can only be used once. Some people say that vouchers are given and not purchased. This is not true – many types, including gift and mobile phone vouchers are on sale all over the world.

– Coupons: these are purchased independently of a reservation and can be used more than once, i.e. until all the credits – monetary or validity period – are used up. Consumers can directly purchase coupon.

When you cut out something in a newspaper, magazine or printed advertisement, fill it in with your name and address and send it off for more information, a free sample or a discount, that is a coupon – never a voucher.

A coupon also means the annual interest payments on bonds – voucher never has that meaning.

In accounting, a voucher is a document representing internal intent to pay money to an external entity, such as a service provider or vendor – a supplier.

Usually, the company (buyer) issues a purchase order, which is then successfully matched with an invoice from the supplier, followed by a voucher, issued by the buyer.

The voucher contains information regarding the receiver of the money (payee), how much the payment is for, and a description of the transaction.

A process known as a payment run in accounts payable systems is executed to generate payments that correspond to vouchers that need to be paid. These payments are then either released or held at the discretion of the company controller or accounts payable supervisor.

In accounts receivable, a voucher may also refer to a document representing intent to make an adjustment to an account. A journal voucher is used for the general ledger when an adjustment within that ledger needs to be made. Accounts receivable is the money that a supplier is owed by its clients or customers that purchased goods or services on credit. 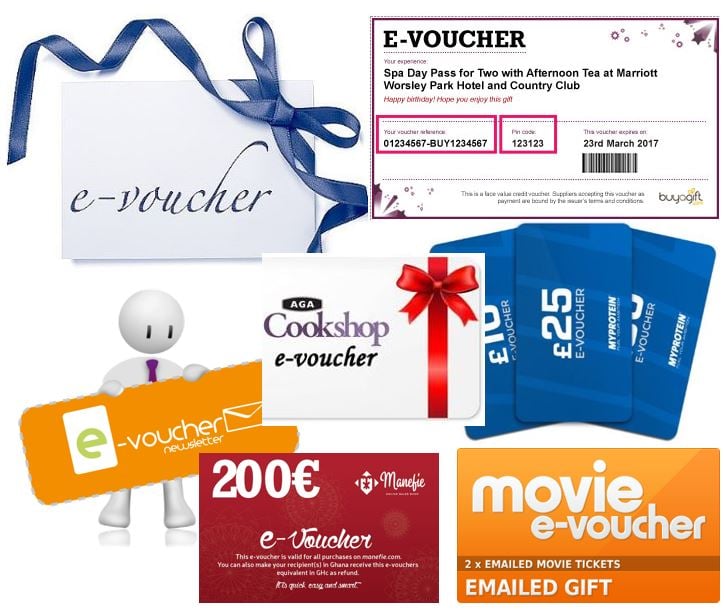 E-vouchers are used online – they may be entered when people are Internet shopping and the relevant vouchers are added to the purchaser’s order. They are usually issued as some kind of code.

The use of e-vouchers grew significantly in 2008-2009. There are several websites dedicated to promoting vouchers online, as well as Facebook groups which offer items such as discounts for students and two-for-one deals for restaurant meals and excursions.

In most cases, when you purchase a special editions game you also get a voucher which can be used towards buying added content for that game.

In the world of mobile phones, a voucher – in the form of a recharge number – is sold to customers to recharge their SIM card with money and to extend the availability of the card.

In most of the advanced economies, there is a rapidly-growing trend of customers using Card Not Present recharge options, such as calling the operator with one’s handset and recharging with a representative, or making online payments.

Many prepaid mobile operators across the world today offer mobile phone owners the option to send an SMS, or use handset applications such as BREW (Binary Runtime Environment for Wireless) or WAP (Wireless Application Protocol) technology.

In the tourism sector, a voucher is proof that the named person has the right to receive a service, meal or produt at a specific place and time. The cycle of a voucher in tourism is as follows:

– The customer is given the voucher by the travel agent or tour operator for services bought.

– The customer goes to his or her vacation destination and hands it over to the service provider, who then is committed to provide that service.

– The provider gives or sends the voucher to the tour operator or travel agent and is paid. In most cases, several of them are collected and sent in batches.

– If the provider performed or gave a service but did not send the relevant voucher to the operator or agent, they will not get paid.

On November 30th, 2016, I was travelling Business Class with British Airways from Cancun, Mexico to Gatwick Airport near London, England. The VIP lounge at Terminal 3 in Cancun was undergoing refurbishment – it was not in use. So, I was given a 300-peso (US$15) voucher towards the purchase of a meal and drink in the departure lounge.

I had a meal and gave the restaurant – Johnny Rockets – my voucher. The restaurant has probably sent it to British Airways and got paid 300 pesos.

Millions of women every year in Africa and Asia suffer terrible chronic illnesses, disability or death because they do not have access to good quality healthcare. This video proposes a voucher system that women could use.