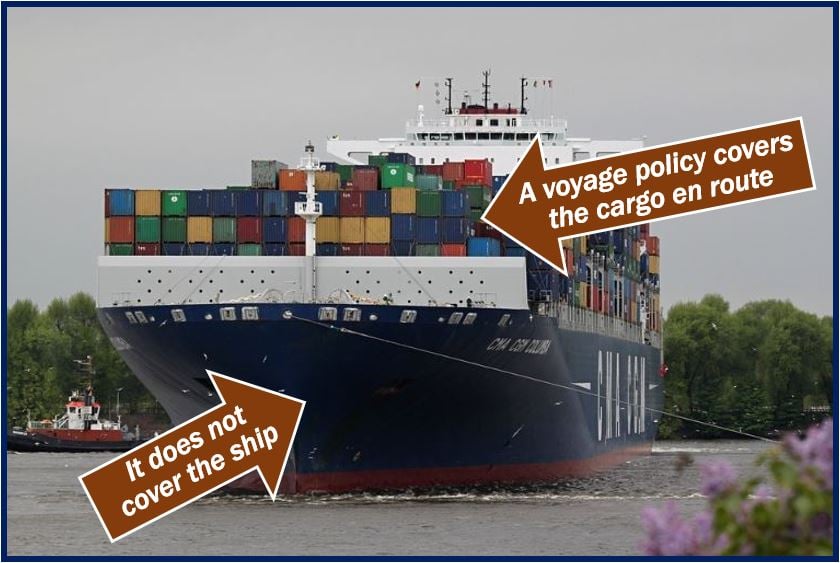 A voyage policy is an insurance policy, specifically a marine insurance policy, that provides coverage due to unforeseen risks to cargo that is being transported by ship. The policy covers damage caused by, for example, earthquake, lightning, fire, and collision. It won’t cover losses or damage that occured as the result of a terrorist attack, war, or nuclear fusion. We also call it marine cargo insurance.

The term ‘cargo’ refers to goods or produce that are transported by sea, land, or air.

Voyage policies, which protect just the goods in transit and not the vessel, are important for businesses involved in international trade. International trade includes the exportation and importation of goods.

Investopedia has the following definition of the term:

“A voyage policy is marine insurance coverage for risks to a ship’s cargo during a specific voyage.”

Most insurance policies are time-based, but not this type. The policy expires as soon as the vessel arrives at its destination.

Exporting companies that need marine shipping only occasionally use this type of insurance the most. It is also useful for companies exporting a relatively small amount of cargo by sea.

Major exporters that deliver their goods by sea regularly prefer open cover marine insurance. Open cover protects all the cargo that the policyholder ships for a specified period.

“The policy would be issued before the inception of the voyage. At the time of taking a specific voyage insurance policy, it is essential to give the complete details of the risk along with complete information about the bill of lading, vessel name, etc.”

The voyage policy covers the cargo during the whole voyage by sea, even if there are unexpected or unforeseen delays en route.

Marine insurance dates back to Ancient Greece and Rome. It wasn’t until the fourteenth century that proper marine insurance contracts were developed. These took place in Genoa and other Italian towns. From there, they spread to northern Europe.

Lloyd’s Coffee House, which opened in Tower Street in London in 1686, was the world’s first marine insurance market. People who worked in the shipping industry wanting to insure cargoes and ships would meet at Lloyd’s Coffee House. Individuals willing to act as underwriters also met there.

According to Risk & Insurance:

“Lloyd’s Coffee House specialized in information about shipping. At this time, there were more than 80 coffee houses within the City of London’s walls, each claimed its own specialization.”

“By the 1730’s, Lloyd’s was emerging as the spot for marine underwriting by individuals.”