What is a whisper number? Definition and meaning

Whisper number refers to the earnings per share that analysts think, but never write, that a company will produce, especially if those numbers are expected to beat expectations. Whisper numbers are the unpublished opinions among those in the investment community regarding companies’ forthcoming earnings.

It is given to clients by a security analyst if there is more pessimism or optimism regarding earnings than what is shown in the published number. Whisper numbers have become much more common since the advent of the Internet.

According to Financial-Dictionary.theFreeDictionary.com, the whisper number is:

“An informal forecast of a publicly-traded company’s earnings per share. One arrives at the whisper number by a combination of past performance, perceived optimism by company officials, and just plain rumor. The whisper number can be useful, as it is occasionally more accurate than official forecasts.” 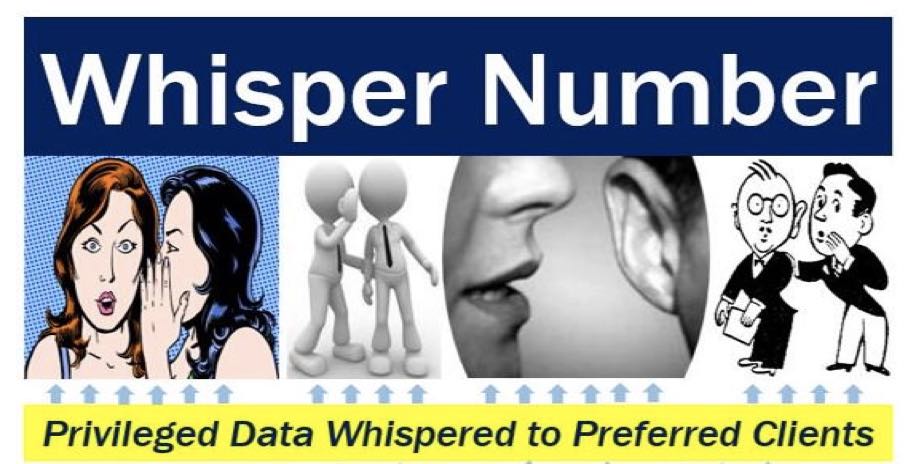 The whisper number is an unpublished, unofficial earnings per share prediction for a publicly-listed company. It is the result of the investment community’s gut feeling, plus what they know and have heard, about the company. Whisper numbers may mirror or contrast significantly with published analyst estimates. Only preferred clients or paying subscribers have access to this data.

To create a whisper number, an investment bank, brokerage firm, financial institution, or a website polls analysts and investors regarding their thoughts on a specific company’s earnings per share over for the next year or quarter.

The result – the whisper number – is privileged data and is usually given just to preferred clients, or if it is organized by a website, to paying subscribers only. In other words, just a limited number of people have access to the information.

A whisper number is not the same as a consensus estimate, which is usually an analyst-driven, company-guided, published forecast. Prominent providers of consensus estimates include Reuters, Zacks and Thomson First Call.

While whisper numbers are generally the result of expert knowledge plus a ‘gut feel’, consensus estimates are mainly driven by crunching numbers. Whisper numbers fuel a large part of the rumor mill that exists among investors and analysts in Wall Street and the City of London.

Why do whisper numbers matter?

Whisper numbers are extremely useful when they differ from consensus estimates, because they may be predicting an earnings surprise.

“It is possible for a company to beat consensus, for example, but miss the whisper number.”

A whisper number can carry a considerable amount of weight for a company that does not have much formal analyst coverage, especially if it proves to be more accurate than the consensus.

This Trade the Trend video explains that Intel Corporation, the American multinational technology giant, exceeded whisper numbers marginally more than fifty percent of the time over a ten-year period.