What is a zombie (computer jargon)? Definition and examples

A zombie is a computer virus that penetrates a system through the Internet. When it gains access to a computer system it can control it and make it do things. Some people refer to it as a zombie virus.

The zombie uses the target computer to launch infected and malicious data. This data is sent to other computers, which end up doing the same, i.e., sending infected data to other systems.

“Type of computer virus that gains access to a system via internet and then takes over its resources.”

“Zombie then uses the victim computer as a launch platform for sending infected data to other computers, thus hiding the identity of its original perpetrator.”

Zombie may refer to a compromised computer

In computing jargon, the word zombie may also refer to a compromised computer that is connected to the Internet. A hacker, trojan horse program, or virus has compromised it. It is typically used to carry out malicious tasks remotely. Jargon means terminology that is specific to one industry, sector, niche, or profession,

Hackers often use a network of compromised computers – zombie computers – to launch DOS attacks and spread email spam. We refer to a network of interconnected computers as a ‘botnet.’ DOS stands for denial-of-service, i.e., a cyber-attack which overloads a computer or network resource, making it unavailable. DOS attacks, for example, make websites crash by flooding them with visitors. 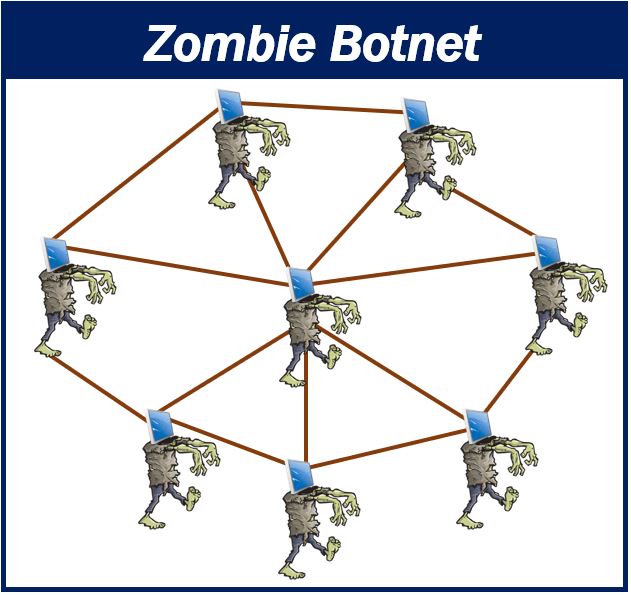 Zombie computer owners do not usually know that their devices are infected.

“Because the owner tends to be unaware, these computers are metaphorically compared to fictional zombies. A coordinated DDoS attack by multiple botnet machines also resembles a ‘zombie horde attack,’ as depicted in fictional zombie films.”

Etymology is the study of the origin of words and how their meanings changed and evolved over time.

According to Etymonline.com, the term ‘zombie’ first appeared in the English language in 1871. It came from West Africa. It was initially the name of a snake god. In voodoo cult, it acquired the meaning of ‘reanimated corpse.’

It was not until the turn of this century that we started using the term for compromised computers and computer viruses, trojan horses, etc.