Flat Top Laser Beam – What is it? 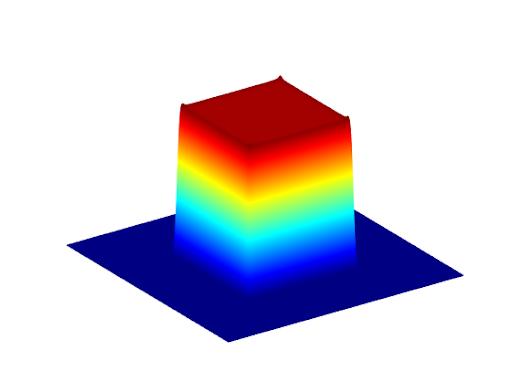 Flat Top laser beams are laser beams that have a unique shape of radiance distribution that is significantly different from the more conventional Gaussian beam distribution. In the latter distribution, the radiance varies very smoothly and spreads indefinitely whereas in a Flat Top Laser beam the radiance is very well concentrated on a specific area. Outside this area the radiance falls abruptly to zero.

For the reasons described above, a Flat Top Laser beam is the way to go when using lasers in industrial or medical applications. With a Flat Top laser Beam the treated area is uniformly illuminated and all the light from the beam is landing on the desired area. This is crucial for industrial processes like laser marking, for instance. A Flat Top laser beam will increase the precision of the process whilst at the same time reducing the duration of the procedure. The same conclusions could be drawn for laser applications in the medical industry. For example, in skin aesthetic procedures, the duration and the precision of the laser ablation time is of the utmost importance for the benefit of the patient

Flat Top Laser beams, however, do not occur naturally. In other words, the inherent distribution on all laser beams is not a Flat Top laser beam. This means that they have to be created starting from a Gaussian beam, which is a more common natural distribution for laser beams. The most effective way of obtaining a Flat Top laser beam is to use a diffractive optical element which can be regarded as a beam shaper.  This diffractive optical element can be placed along the optical path of the laser delivery system. When the beam traverses the element, the element  applies a controlled phase modulation on the beam profile . Then, the effect of diffraction plus some distance propagation alters completely the shape of the input Gaussian beam and the new, Flat Top laser beam distribution, emerges.

One important aspect to highlight is that the geometrical shape of the Flat Top Laser beam does not have to be circular, as most input beams will be. In fact, it can be of any geometrical shape. It can even consist of more than one isolated region. The important feature is that the energy is located only in those predefined areas of interest and that within them the radiance is constant, with no ripples or smooth variations at the edges.

You may be interested in: Laser Technology Across the Industries