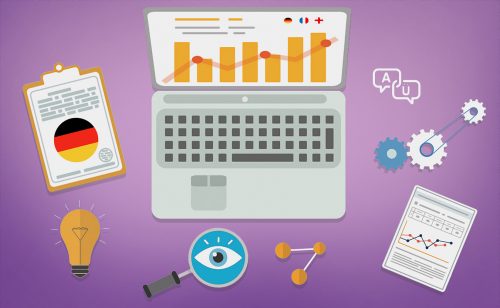 Is your business successful in an English-speaking market and now you want to succeed in Germany? Or perhaps you’re taking the plunge and relocating there? Maybe you already have a German website, but it’s just not ranking as well as you would like.

Whatever your situation, congratulations! Germany is one of Europe’s biggest economy and marketplace and the country with Europe’s most extensive user base.

The fact that so many people use the internet in Germany doesn’t mean that it is used in the same manner as other European Countries, however. The German language has unique features that also requires its own approach to SEO. This article explores how to succeed in German SEO and rank top with Google, whether you’re translating an existing site, or developing a completely new one.

Germans tend to merge words together, meaning words like “donaudampfschiffahrtsgesellschaftskapitän” regularly appear both on the page, and more challengingly, in Meta Tags. In English, this becomes four words: “Danube steamship company captain.”

What challenges does this create and how do you get around them?

If Meta Titles are longer than 57 or so characters, Google will crop them. It’s therefore important to keep your Meta Titles shorter than this. If you’re including a long word in your Meta Title, first check whether Germans actually search for it. If possible, use a shorter word. If not, use the full word and 1 or 2 dynamic words that draw the eye and encourage potential visitors to choose your site in the search results.

The Meta Description can be up to 157 characters. Best SEO practice for Meta Descriptions is to focus on showing what makes your page unique to increase the Click Through Rate, therefore this is where your more flowery text can go.

While it’s a technique that’s as old as SEO itself, it’s still important to choose target keywords for different landing pages. When translating a site into German, match a relevant German keyword to each relevant English one. This way, your translator can ensure that they include German keywords that have a decent monthly search volume.

With some long words, people might add a space when searching for them, miss out an accent, or misspell them. When deciding which keyword to use, take whichever has the highest search volume, but use whichever is grammatically correct. Google can tell the difference and so will some of your visitors.

The use of social media is significantly different in Germany than in other European communities. Even amongst other German-speaking countries, there are variations in how social media is used.

Although we’ve seen numbers going down worldwide in terms of Facebook users, surprisingly, these numbers have gone up in Germany. In February 2020, Facebook had a market share of 51.3%, while in February 2021, it is 70.8%. LinkedIn has a market share of over 11%, but it is far more critical to a business than many other social media networks. Twitter is less popular in Germany (5.5%) than other European countries, so shouldn’t be your priority.

German professionals have strict rules to keep business and private lives apart. When you do business with Germans, you can expect that they want you to put your business first, while all things social will come later.

The main thing to understand is that one’s business and private life are kept separate in German culture. You should design your message to the appropriate channels; LinkedIn is big in Germany because they cater to business, not social conventions.

How Google handles German backlinks is another instance that many have found bewildering. Google’s SEO algorithms appear to penalize ‘black hat’ German backlinks more severely than elsewhere. This means Google.de can and will employ ranking penalties far faster than they do for other countries.

Your German link building portfolio must be developed by focusing on relatively few backlinks from high authority sites.

Some things to look out for when building German backlinks:

Doing business in Germany is something that many have come to love. Germans are, by nature, incredibly professional, and fantastic to do business with. As long as you understand the business ecosystem, you can only succeed.

Google has a massive presence on the German language internet, as it does worldwide. In numbers presented on stats website statcounter.com in February 2021, Google’s presence is presently at 92.04% worldwide, against 90.47% in Germany. The two other players on the German market with a piece of the pie? Bing with 6.14%, and a new player: Ecosia with 1.07%.

German internet users have become increasingly worried about data leaks, personal data protection, and safety online. More than 72% of the population felt rather or very unsafe online, according to Statista. A recent issue with Google tracking users with an Android phone using a COVID-19 app has been particularly harmful to the search giant.

The growth of Ecosia is another factor that needs to be considered when moving to Germany. It has seen a dramatic upturn in its user base, and that is not surprising. Since its founding in 2009, Berlin-based Ecosia has used its profits for the planting of trees. Every 1.1 seconds, an Ecosia tree is planted. A thorough privacy policy also dictates that all search data is anonymous and removed within four days.

While optimizing your website for Google is more than enough for now, the search engine market is rapidly changing. As with social media, it’s worth keeping an eye on ongoing develops within Google and other search engines, to be sure you continue to rank high with your German website.