The Qatar World Cup is just over two months away — and while the Middle Eastern-based, winter-held tournament is something of an unknown entity to fans of the sport around the globe as it’s a first for both, it’s still going to be greatest festival of football as we know it. 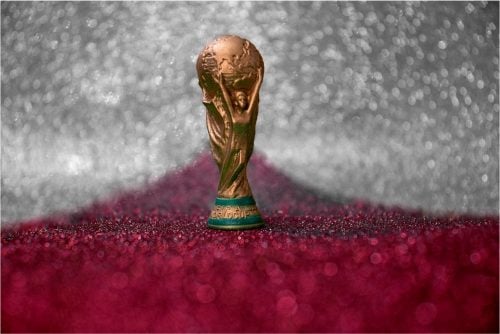 The group stages get underway with hosts Qatar facing off against South American’s Ecuador on November 20th, and while many might argue that the World Cup doesn’t really get interesting until the knockout stages, there’s plenty to get excited about when looking at the group fixtures.

That said, read on as we take a look at four of the group stage fixtures you won’t want to miss at this year’s World Cup.

Jumping straight to matchday two, Denmark take on defending champions France in an all-European clash that promises to be a thriller at Stadium 974 on November 26th. The Danes recently stunned the French in a Nations League encounter, coming back from a goal down to win 2-1 in Paris thanks to a brace from Andreas Cornelius.

The Red and Whites, who will play host Les Bleus in the return fixture of that Nations League group later this month, were the surprise outfit of Euro 2020 — making it to the semi-finals before ultimately losing to England at Wembley.

Kasper Hjulmand’s tricky outfit, who are now ranked 10th in the world, will be hoping to be a thorn in the side of the big guns again in Qatar — perhaps starting with this clash with France.

In what looks set to be a fantastic day of football, Argentina vs Mexico follows Denmark vs France on November 26th. Latin American rivals, these two sides are no strangers to each other — including in Copa Américas — but the winner of this game could go on to top Group C and bag the easier route through the knockouts.

Mexico might be as high as 12th in the FIFA World Rankings, but this game at the 80,000-seater Lusail will be an uphill task for Gerardo Martino’s men. El Tri are winless against La Albiceleste in 10 outings and given Argentina’s current run of over 30 games undefeated, it’s fair to say Mexico will have their work cut out.

Add to that the fact this will likely be Lionel Messi’s last appearance at a World Cup, and Argentina are going to be a team on a mission in Qatar later this year. It would be no surprise to see them go all the way.

Just when you thought this weekend of action couldn’t get any better, we’re treated to Spain vs Germany the following day. Two heavyweights of the European game, we probably won’t see many better (or bigger) games in the group stages than this clash of the titans.

Neither nation are arguably at the peak of their powers after enjoying golden years earlier this millennium, winning the World Cup in 2010 and 2014 respectively. But that won’t take anything away from the quality of this match, which will be their third meeting at a World Cup.

The Germans will be out for revenge at the Al Bayt Stadium on November 27th as well, as they lost 6-0 to Spain last time they met in a Nations League tie back in 2020.

Our fourth and final choice is Wales vs England on matchday three of the group stages. Battles of Britain have become all the more common at major competitions over the past few years, with England squaring up against Wales at Euro 2016 and Scotland at Euro 2020.

And they will face the Welsh again in the group stages in Qatar, going toe-to-toe with Rob Page’s men at the Al Rayyan Stadium. It’s the first time since 1958 that Wales have made it to a World Cup finals and to mark that with a win over their rivals England would be much to the delight of their fans.

There shouldn’t be an upset on the cards for Three Lions though, as they are set to arrive in the Middle East as one of the favourites to win the entire tournament if you’re looking for a bet on football. But if it’s anything like their matchup at Euro 2016, when Daniel Sturridge’s dramatic winner sealed a 2-1 victory in injury time, then we’ll be in for a treat.