The history of car manufacturer logos is long and confusing. Some drew inspiration from the stars, others from crosses or windmills. Very often people look at car logos, but what do they really mean?

The history of the creation of this logo took place at about the same time as the Honda logo was made. Several years before the outbreak of the First World War, Gustav Otto and Karl Rapp began to engage in independent aviation activities. Initially, the Gustav plant produced reconnaissance and training aircraft, later – biplanes, and the Karla plant – mainly aircraft engines. However, their business fell into disrepair during the war and was bought by investors before the war ended.

As a result, two new companies were created: Bayerische Flugzeugwerke and Bayerische Motoren Werke, which in the 1920s, mainly thanks to Camillo Castiglioni (the richest man in Central Europe at that time), were merged into one company.

Thus, the BMW logo indicates the origin of the company, symbolizing the rotating propeller of the aircraft, the white and blue checkerboard refers to the flag of Bavaria, where BMW is from. However, it should be emphasized that in fact such an interpretation was born only after the creation of the brand – initially it was a modified version of the emblem of the Karl Rapp company with a horse’s head in the center.

One of the Ferrari models was acquired by Ferruccio Lamborghini, a wealthy entrepreneur and (originally) a manufacturer of agricultural tractors. However, since he was not satisfied with the performance of some of the car’s components, he approached Enz with a proposal to make the appropriate design changes. Enzo ignored the offer of the then unknown “tractor driver”.

Then Ferrucci decided to prove his point of view: he opened his own production, hiring the best specialists and a year later presented the legendary Lamborghini 350 GT to the world.

The appearance of the attacking bull in the Lamborghini logo is associated with a passion for bullfighting, as well as friendship with their famous breeder Don Eduardo Miura. By the way, Ferruccio was born a zodiac bull, so the idea of ​​a company logo came to mind. The brand itself has not undergone any modifications in its more than 50-year history.

The Mitsubishi badge may resemble a windmill, but in practice it has nothing to do with it. The logo has undergone several small transformations, but its foundation remains unchanged from the very beginning.

It was created back in the nineteenth century by Mitsubishi founder Yataro Iwasaki, who inscribed his family coat of arms (three diamonds) and the coat of arms of his first employer (three oak leaves arranged like the company’s current logo). This also includes the similar Toyota Crown logo and some others. 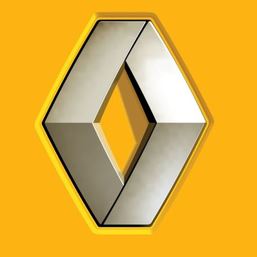 The Renault logo has changed many times over the years. The first, released in 1900, is a medallion with the initials of the three founding brothers of the brand – Ferdinand, Marcel and Louis. Another stamp related to its functioning in the automotive industry and showed the cogwheel and the front of the car, which were placed in the center of the circle.

Shortly after the First World War, Renault began producing tanks, which entailed “replacing” the car in the logo with a military armored one. Later in 1925, the diamond symbol was introduced for the first time. The latter is still used today, although its design has changed several times over the years. The diamond should be a symbol of high quality and nobility of the brand.

Sakichi Toyoda was an outstanding entrepreneur and inventor (he is, among other things, the author of the automatic mechanical loom and the first prototype of the internal combustion engine). Over time, he began to gradually leave the weaving industry, sold patent rights to an automatic weaving workshop and with the money received, with the support of his son Kiichiro, he opened the Toyota Motor Corporation.

The name of the company was created after simplifying the name of its founder, and the logo is formed by three ovals, consisting of the letter “T”. Image specialists believe he is hiding several messages. The stamp depicts the steering wheel, and the intersecting circles represent the symbol of infinity.

Safety, reliability, attention to every detail – these are the first associations that evoke in the memory of Volvo cars. Interestingly, the very name of this brand appeared even before it began to produce cars, and was invented by the management of the Swedish SKF ball bearing plant.

Volvo’s name was ingenious, simple, and perfectly representative of the company’s character. In addition, it was easy to pronounce and at the same time difficult to make a mistake in spelling or dictation. All these issues were important due to the fact that SFK was already a world leader in the production of bearings for the industry, and at the same time dynamically increased the export of other products from its offer: gearboxes, bicycles and cars.

In the mid-1920s, two SFK employees, Assar Gabrielsson and Gustav Larson, who shared a passion for the car, convinced the company to expand its product range with cars. So, in 1927, the first model of this brand, the OV4, rolled off the assembly line. He left it with a logo that has remained unchanged for over 90 years.

Interesting related article: “What is a Logo?“