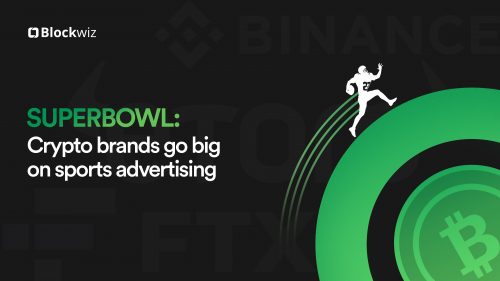 During the yearly celebration of football, a ritual has emerged that has many viewers as interested in the Super Bowl ad as they are in the game itself, if not more. And this year, some cryptocurrency advertisements drew the attention of a large audience. But why are brands taking to the Super Bowl to advertise their projects and how are they doing it—these are some questions that need to be answered.

Cryptocurrency strategists saw 2021 as a watershed moment with a flood of investments pouring in recent years. Coinbase went public; an exchange-traded fund tracking Bitcoin futures debuted on the New York Stock Exchange. Also, El Salvador pioneered becoming the first country to declare Bitcoin a national currency. As a result, crypto has progressed from a little digital hobby for tech-bros to a more recognisable cultural force, attracting everyone, from the wealthy elite like Elon Musk to the average retail investor.

With a reputation for being volatile and dominated by wealthy techies, the crypto industry has attempted to primarily unravel itself to the general public by investing heavily in marketing. Companies are in a digital rivalry for new subscribers, market dominance, and cultural oxygen in the fiercely competitive crypto market. Over the last year, the number of crypto companies advertising has almost tripled. As a result, according to a sample of 200 companies reviewed by research firm MediaRadar, their spending on marketing has nearly quintupled.

“Cryptocurrency company advertisements have increased in the last year. Several companies buy sports venue titles and offer to sponsor sports teams to have their brand logos on their jerseys and other merchandise. For promotional and marketing activities, cryptocurrency companies select the most lucrative spots in digital advertising. When you are guaranteed a $100 million audience, the Superbowl will undoubtedly be at the top of your list of places to advertise your brand,” stated Dev Sharma, CEO of Blockwiz, a leading crypto marketing agency.

Although live television streaming gives way to OTT platforms and mobile entertainment, the Super Bowl remains the most prominent event on the advertising calendar. The opportunity to define the year’s television events, such as the Superbowl, presents a unique platform and opportunity to settle doubts about what promises to redefine the existing economic model.

There were several crypto-based ad campaigns that ruled Super Bowl. Some of the notable ones have been enumerated below.

The most popular cryptocurrency app in the US released a sleek and modern ad that consisted solely of a QR code slowly bouncing all over the screen, secretly hoping that curious audiences would inspect the code and follow the links. The strategy worked, as the app crashed due to an overabundance of downloads, resulting in more widespread popularity.

The cryptocurrency platform sought the endorsement of Larry David, a national favourite to compare cryptocurrency to the wheel, forks, democratic values, the light source, and space exploration. The key message is that if you do not recognize the potential of cryptocurrencies, you will be left behind and miss out on disruptive technologies.

On Crypto.com, LeBron James visited his young CGI-created prototype, emphasising the idea that fortune tends to favour the brave. The advertisement compares LeBron’s once-uncertain but ultimately successful transition from student to the NBA to cryptocurrency investing. Even though there was no direct mention of cryptocurrency, the addition of LeBron James piqued people’s interest.

The Super Bowl is no less than a cultural event that draws a large audience. One can understand the impact and significance of the Superbowl or, say, crypto-bowl (as Reddit users named it) from the fact that National Football League star Tom Brady has signed on as a brand advocate for FTX. Crypto.com paid $700 million to rebrand Los Angeles’ Staples Center arena. Celebrities like Spike Lee, Matt Damon, and Neil Patrick Harris have also appeared in crypto commercials for the Super Bowl. With so much branding, advertising, marketing and growth opportunities, it’s no wonder then that the Super Bowl has turned out to be a “brand-favourite!”