How Do Car Accidents Compare to Motorcycle Accidents?

The dangerous nature of a motorcycle is actually one of its largest appeals to most people. The open road, the sunny weather, and the freedom combined give a sense of exhilaration and excitement that cannot be replaced or mimicked by anything. 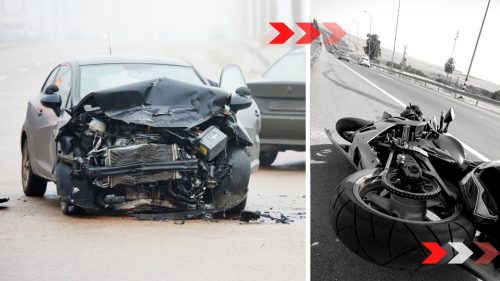 However, the open road is quite a dangerous place. One look at the motorcycle accident fatality data will show just how dangerous it actually is. In 2017 alone, 89,000 motorcyclists were injured, according to the National Highway Traffic Safety Administration. Per vehicle miles travelled, they are 27 times more likely to be killed than those travelling by car. In the same year, there were 5,172 motorcyclists killed in traffic, making up almost 14 percent of all traffic fatalities.

From drivers’ errors to bad weather and road conditions, there are many different causes of a one-car accident. Looking at the staggering number of 11 million car accidents in the U.S. each year, data shows these are the most common causes of a car accident.

The National Safety Council (NSC9 discovered that one-fourth of all car accidents is related to the use of cell phones while driving which falls under the category of distracted driving. The biggest danger here is because looking at the phone divides the driver’s attention, causing his reaction time to decrease.

There is a good reason why most truck drivers are required to take a break and sleep for a certain amount of time before getting on the road again. The same rule applies to all drivers, although many choose to disregard it. Driving when fatigued and falling asleep at the wheel is a cause of nearly 3% of all traffic fatalities in the U.S.

Although speeding does not involve a driver that is under the influence of alcohol, DIU drivers often engage in speeding. These two causes go hand in hand and nearly half of all car accidents happen for one of both reasons.

Any type of sharp lane switching in combination with speeding can be described as aggressive driving. It also includes failure to yield the right of way, aggressive tailgating, and disregarding traffic signals.

This type of driving is so dangerous that it is actually illegal in some states. When a motorcyclist is riding between two lanes they put themselves in great danger. Other vehicles are just too close to make any maneuvering successful.

When it comes to single motorcycle accidents, nearly half of them are caused by riding under the influence and speeding. This is also one of the biggest causes of all car accidents.

Poor road conditions such as potholes, uneven lane heights, and slick roads are much more dangerous to a motorcycle than to a car. These things may have little effect on other vehicles, but they can cause a motorcycle to crash. Things like gravel and leaves can make a motorcycle crash especially if it is in the middle of a turn or going through a bend.

Motorcyclists have a 35 times higher risk of accidents per mile driven than car drivers. The NHTSA also highlights that around 29 percent of all motorcycle accident fatalities were a result of ‘’alcohol-induced crashes’’, indicating that the alcohol use can make a motorcyclist feel over-confident.

Furthermore, the data showed that 40 percent of all motorcyclists fatalities in 2017 happened between 3 p. m. and 9 p.m., showing how busier roads and diminished visibility make riding a motorcycle much more dangerous.

The reason why motorcycle riders are much more vulnerable than car drivers is that they are not protected by the shell of the car during the accident and are being thrown off the motorcycle in most cases.

Being jerked hard and thrown off the bike, airborne, and landing hard can lead to many extensive and painful injuries, plenty of which can have catastrophic consequences and can change a motorcycle rider’s life forever.

One of the most important parts of a motorcyclist’s gear is a helmet and for those who are not wearing it there is a greater chance of suffering concussion and brain damage. And no matter how good a piece of gear is, sometimes it is not enough to save you from road rash and other soft tissue damage.

Upon landing on the ground, many motorcyclists suffer from a broken pelvis, shoulders, and other joint injuries. The nerves of the motorcyclist’s upper arm may suffer damages and lead to permanent paralysis of that arm. But the most common is certainly chin and other facial injuries and disfigurements as 35% of all motorcycle accidents resulting in a hard blow to the chin.

If an accident was not a motorcyclist’s fault, a good motorcycle accident attorney can recover a sustainable compensation for the rider and their injuries and suffering. But it is always better to try to avoid the accident from happening and save yourself from many painful injuries.