How does Photomath Work?

Math is perceived as the most difficult subject in school, explaining the essence of a graphing calculator to students.

PhotoMath is a free app that’s built to read equations and solve expressions in mathematics in real time when you use your smartphone camera. Download for Android for PC.

Although it sounds as if it supports cheating, the app offers step-by-step guides that students can use to understand how to solve specific math problems. The guides are handy for students without tutors or those who struggle with solving similar math problems.

The PhotoMath app also helps parents to jog their memories when helping their kids with math assignments. The app supports various math problems, including: 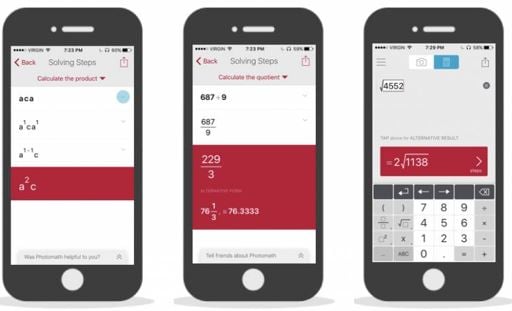 The app utilizes optical character recognition (OCR) technology to read equations in textbooks or pages, and calculates answers within a few seconds. The app features a red frame that students use to capture equations.

However, the PhotoMath app is limited in its ability to read math problems. It can only read printed text, but not handwritten notes. It also mistakes the “x” variable in order of operations equations as the multiplication sign.

Furthermore, the red frame within the app also brings about limitations because some textbooks don’t have enough spacing between two different math problems. This makes it difficult to capture a specific math equation you want to solve.

How the PhotoMath App Works

Microblink is the developer behind the OCR technology. It recognizes characters such as letters, numbers, and math symbols.

OCR is a programming technology that converts images into specific character sets such as x, 2, =, and 4. The technology “sees” that the number 2 is a superscript related to x.

OCR technology is commonly used to convert print books into eBooks. However, doing OCR with handwritten notes is difficult because the shape and sizes of letters vary.

It can still work.

Character recognition is easier when the range of possibilities is limited. It also means that the app can’t read your shopping list. The specific type of OCR technology in use determines whether the app can read handwritten math notes or equations on a chalk board, or not.

At this stage, the app solved the math problem.

The PhotoMath app runs the characters it recognizes from a captured image through its algorithm for examination. The algorithm assesses each character in relation to the other to determine the right formula for solving the math problem.

A problem solving algorithm is then applied onto the chosen formula to offer steps and solutions to the math problem in equation.

It takes creativity to combine existing items to produce something that’s useful and new.