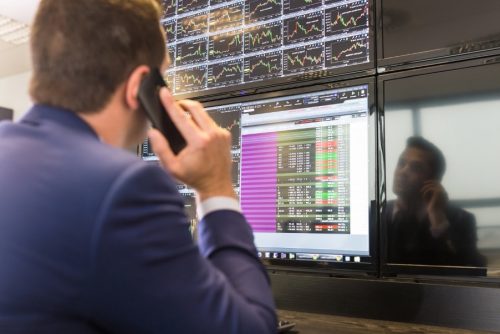 In financial trading involving stocks, securities, and other assets, the general rule is to buy low and sell high. Intuitively this makes sense and indeed describes the basic strategy of many traders, even if this strategy is dressed up with more complex theorizing. However, this commonsense approach is not the only way to make money on the stock market, and one of the alternatives is known as momentum trading, the basic principle of which could be described as buy high, sell higher.

Momentum is a scientific principle according to which a moving object gathers velocity. Think of a stone rolling down a hill. At first, it moves quite slowly, but as it goes on, the speed of its movement increases. We call this gathering momentum. This can also be observed in the stock market. Often when the price of a stock starts to rise, it does so relatively slowly. Then as more traders notice that it is growing in value and begin buying in, the price goes up more rapidly.

Momentum also applies to a stock that is falling in value. At some point, traders will begin selling said stocks to make a decent profit while the price is still high, and when enough traders do this, the price will drop. At first, this happens slowly and in small increments. But reasonably quickly, other traders will realize that the upward curve has peaked, and the price is now falling, so to make a profit on their acquisition, they too must sell as soon as possible. The more that people sell, the more the price drops, and so the value of the stock goes down faster and faster.

We can see that a stock’s value goes up or down most rapidly or significantly, not at the beginning of a trend, but when the trend is already well underway. Momentum trading takes advantage of this by buying and selling in the middle of a trend when the volatility of the stock is greatest. Of course, traders still want to pay as little as possible and sell for as much as possible, but rather than buying when the price is at its lowest, they will wait until an upward trend is established.

Momentum traders may pay a bit more for a stock than they might have, but by waiting, they can be more confident that an upward trend has been established and that the price will continue to rise. Similarly, they may sell before the trend peaks or just after to realize the most significant profit in the shortest time.

While an experienced trader may observe momentum simply by studying the appropriate charts, there are various tools to help establish and analyze an upward or downward trend. These include technical indicators like a stochastic oscillator and the Average Directional Index (ADX).

Traders may look at absolute momentum or relative momentum. The former refers to how a stock performs compared to its previous history, usually considered via a 200-period exponential moving average (EMA). The latter measures how well a stock is currently performing compared to the price of equivalent securities.

While momentum traders may seek to capitalize on long-term trends, most will look to enter and exit a trade relatively quickly. By focusing on the current trend rather than waiting for it to reverse, these traders are essentially profiting from the herding behavior of their rivals, exploiting the tendency of interested parties to “jump on the bandwagon” and buy because others are buying.

Negative momentum can also be exploited, following a principle of sell low, buy lower. But while large profits can be made relatively quickly from momentum trading, there are also commensurate risks. Unforeseen circumstances could cause the trend to switch before you have a chance to capitalize on it. A trader might find that they have bought a stock at a much higher price than it is currently worth or have sold for a low price, and the value is now going up.

Momentum is the rate of acceleration of a stock’s price, and momentum trading takes advantage of this by entering a trend just as it’s picking up speed. Accurate analysis and timing are essential for successful momentum trading. Identifying the strength of an underlying trend can lead to significant profits.