How six favourites triumphed on Sunday at the Dublin Racing Festival 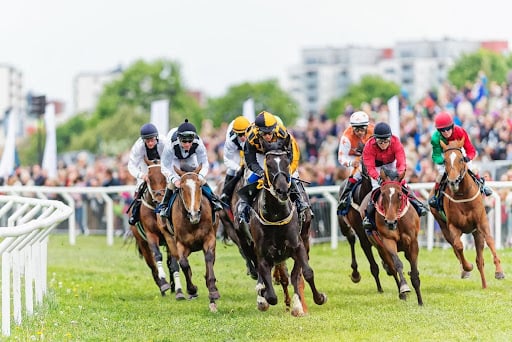 It’s every bookmaker’s nightmare to see favourite after favourite winning at any horse racing meeting, but that is exactly what happened on Sunday at the recent Dublin Racing Festival at Leopardstown. In an incredible series of events, the pre-race favourite won six successive races on the final day of the event, meaning there were plenty of happy punters toasting their success afterwards.

It all started in the first race of the day — the Irish Stallion Farms EBF Paddy Mullins Mares Handicap Hurdle. Gordon Elliott was the man of the moment as he secured a one-two, with pre-race favourite Party Central getting the better of stablemate Say Goodbye, who almost produced a shock win at odds of 33/1. Party Central had enough in the tank to earn the win though, and there’s no doubt that it was party central amongst those who had backed the six-year-old.

The second race was a Novice Chase, and there was never any real doubt that Galopin Des Champs would get the victory. Having started at highly favourable odds of 4/9, jockey Paul Townend produced an excellent performance to win the race for trainer Willie Mullins by nine lengths over Master McShee and stablemate Gaillard Du Mesnil. It’s no surprise that Galopin Des Champs is being heavily fancied in the Cheltenham betting tips for the Brown Advisory Novice’s Chase.

The bookies were again left with egg on their face after the Dublin Chase, when another Mullins horse, this time in the shape of Chacun Pour Soi claimed victory. It was a commanding performance from the 10-year-old, with Townend again a cut above the rest in the saddle. There were 12 lengths between Chacun Pour Soi and second-placed Dunvegan, proving the pre-race betting to be correct.

A Handicap Chase followed, and although Birchdale, trained by Enda Bolger was the 9/2 favourite before the race, it was by no means a done thing. The likes of Blackbow, Fakir D’alene and The Shunter were all tipped as potential winners too, but a great finish by the eight-year-old saw him pip Foxy Jack to victory by a length and a quarter.

There were no surprises in the next race, as Honeysuckle continued her sensational unbeaten run by winning the Irish Champion Hurdle. It was another fine performance by Rachael Blackmore on board the Henry de Bromhead-trained mare, and now she’ll head to the Cheltenham Festival as the standout favourite to defend her Champion Hurdle crown. Incredibly, it was the fifth successive race to see the favourite come out on top, but the bookies’ misery didn’t end there.

Yes, Sir Gerhard ensured that Mullins and Townend secured a hat-trick of victories on the day. It was a great display by the seven-year-old, winning by six lengths to leave Three Stripe Life and Colonel Mustard battling it out for second. Once again, there were scenes of jubilation in the Leopardstown stands, as punters celebrated their success.

The bookmakers’ blushes were spared somewhat at the end of the day as 20/1 Call Me Lyreen and 40/1 Lily Du Berlais triumphed in the last two races of the meeting, but it was still a remarkable occurrence to see six successive races won by favourites at a high-profile fixture. The punters will certainly be hoping for similar scenes when the Cheltenham Festival rolls around next month.