How to Deal with Inflation from a Personal Finance Perspective 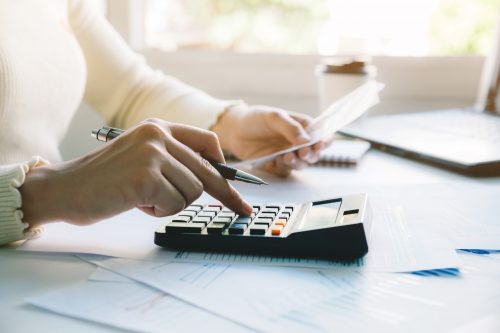 It’s difficult not to hear a lot about high inflation in the United States and throughout the world right now.

There are a lot of reasons for it that have unfortunately all come together at the same time.

In some situations, you might get more money because of inflation. For example, if you’re selling a car, it could bring in more cash than it would have even a few months ago. There is a shortage of chips that car makers use, meaning the auto industry is raising prices to offset the challenges they’re facing.

If you’re looking for a new job, you’re likely to get offered a higher salary than you would have last year because of not only inflation but the pairing with the ongoing labor shortage.

At the same time, even with increases in things like pay, you might still see your cash purchasing power being eroded because of inflation.

Below we go into some of the factors causing the situation and how you might be able to make financial decisions that will help you protect your money from the effects.

The term inflation refers to declines in your purchasing power over time.

An estimate of the rate at which you’re experiencing a decline in purchasing power can be reflected as the increase in an average price level of a set of goods and services in the economy over the same period of time.

Inflation is a measure of the impact of price changes overall for a set of products and services, based on the idea that as individuals, we need many of these things to live a good quality of life. Some of the items used to measure inflation include commodities like food and utilities, transportation and services such as healthcare, labor, and entertainment.

When a currency loses value, as is the case with inflation, prices rise. You can buy fewer goods and services with the same amount of money. There is a rise in the general cost of living, which means a decline in economic growth.

When the national money supply growth is more than economic growth, it leads to inflation.

The Consumer Price Index (CPI) is the most commonly used price index. The CPI looks at a weighted average of the price of a basket of goods and services. These include food, transportation, and medical care.

The calculation of CPI is done by taking price changes for each item and then averaging them based on their relative weight in the basket as a whole.

The retail prices for each item are used.

Changes in the CPI are then used to make price changes associated with the cost of living.

Why Is Inflation So High Right Now?

Inflation was for months discussed as something that was going to be transitory, meaning it would calm down. Now, however, it looks like inflation might be here to stay for the longer term.

Economists and analysts are signaling that we should expect higher prices will go into next year and potentially beyond.

Recently, the consumer price index went up 6.2% from a year ago. That was the most significant 12-month increase since 1990.

The COVID-19 pandemic is largely to blame for inflation. The U.S. economy came to a standstill in spring 2020 because of lockdowns. Employers cut 22 million jobs, and economic output went down at a rate of 31% in the April-June quarter last year.

Many companies braced themselves for an even worse economic downturn. However, that didn’t happen, and the economy recovered strongly.

Businesses were trying to play catch up after cutting workers and investments. They couldn’t hire enough people to fill their job openings or get enough supplies. Ports have become clogged, and global supply chains have suffered, with all of this leading to rising costs.

Companies are passing their higher costs onto consumers, which is what happens.

Politicians who wanted to prevent an economic collapse pushed for government spending in the form of various types of coronavirus relief for companies and individuals, and that may have overstimulated the economy too.

In Europe, while the supply chain issues are similar, the inflation isn’t as high as in the U.S. Some experts say it’s because Europe didn’t do as much stimulus.

How Long Is the Inflation Going to Last?

Consumer price inflation is probably going to keep up for the near-term foreseeable future. The supply chain bottlenecks are unlikely to be fixed any time soon, and the demand-side of the economy is still strong.

Some economists say they still believe the inflation will be transitory, but when they use that term, they mean more like lasting around a year.

There are fears that the situation we’re in currently could lead to a stagflation scenario as the U.S. saw in the 1970s. During stagflation, there was an unusual combination of high prices and high unemployment.

Economists aren’t sure we’ll get to that point, thanks to some positive factors like economic growth that’s expected to continue picking up.

What Can You Do to Combat Inflation?

While there’s not much you can do on a larger level about inflation, there are ways to protect yourself and reduce some of the effects on your finances.

Otherwise, when you don’t take inflation into account, it carves away the value of your money. If you save money, it loses more and more value over time.

Try to Keep Your Income Growing

You want to try your best to make a concerted effort to keep your income growing throughout your life so that you can keep up with changes in the cost of living. If you’re working for an employer, make sure you’re regularly evaluating your salary and determining when a good time to renegotiate it might be.

You may need to add additional streams of revenue to your life as well, such as a side hustle, a rental property, or investments.

It’s inevitable that some things are going to go up in price more than others. There are even things that can go down in price. For example, since the 1970s, things like clothing and electronics have continued to decrease in price, even as inflation has gone up.

When you know what’s rising the fastest, you can adjust your budget accordingly. For example, if gas prices are going up very quickly, you might want to adjust your finances so that you can put more money toward that and less toward another area.

If you’re going to make a big purchase, like a new car, do it sooner rather than later. If you wait on these purchases, they’re almost always going to go up in price. The way things are going right now, you could end up paying substantially more for a new car if you wait just a few months.

Be Strategic with Debt

If you have current debt that you’re dealing with, inflation isn’t a bad thing in this regard. When the dollar loses value, then the dollars you use to pay off your debt ultimately is representative of less purchasing power than when you first took out a loan.

However, if you need a new loan for something, it can be problematic. When inflation is high, banks will usually raise their interest rates to make up for declines in the dollar’s value. The Federal Reserve can also raise interest rates as a way of trying to get inflation under control.

If you need a loan, it’s a good idea to take it out as you see inflation going up so that then you can pay it off with cheaper dollars. If you wait, banks will likely increase their interest rates, so your loan will be more expensive.

Inflation is bad for savers if you’re someone who keeps your money in cash.

If you keep cash in a savings account, you may earn a little interest but not enough to keep up with inflation.

You need to consider investments as a way of saving money when inflation is rising or is high.

You can set aside some money in an emergency fund money market account, or high-yield savings account so you’ll have liquidity for that. Then, you’ll likely want to invest in something with more risk, like the stock market so that you can have a chance of growing your money faster than inflation erodes its value.

Inflation can be both bad and good, and there are winners and losers when it’s happening. If you could negotiate a higher salary, or you’re an investor, you could position yourself as one of the winners.

Interesting Related Article: “What is inflation? Its causes and effects“