How to scan QR codes on iPhone/iPad 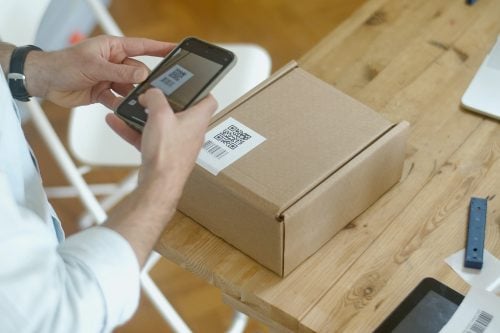 Scanning QR codes on your iPhone, iPad or other iOS device is simple if you know what you’re doing. If not, you’ve come to the correct place, and we’ll show you how to scan a QR code on an Apple device.

While QR codes seem not to be as popular as many expected, they are still used by many companies, websites, and locations to share or store information. QR codes are commonly used to store booking websites, coupon codes, website connections, and contact information.

But, like with other applications, it can be challenging to figure out what to do or get your iOS device to identify what it’s looking at. That’s why we’ve created this short explanation about how to scan a QR code with an apple device.

This has been working since iOS 11, when it was introduced as a handy feature, and has been enhanced a few times with each new version of Apple’s operating system.

How to scan QR codes on iPhone?

How to scan QR codes on iPhone and iPad?

First, launch your iPhone or iPad’s camera app. It’s generally on the home page, in the bottom right corner, but on iPads, it’s on the first page, unless you’ve changed it.

Now point the camera at the QR code. Your iOS device will automatically recognize the QR code without pressing the shutter and provide notification. (You must have a cell signal or be connected to Wi-Fi for this to work.)

Tap the notification to go to the QR code’s destination. It could be a website, app, or phone function. Remember that current iOS releases allow you to change the default browser on your iPhone or iPad, so you’ll see a notification to use Chrome or Safari when scanning.

You’ve just scanned a QR code on your iPhone or iPad in a few steps.

Your iPhone has a secret code scanner.

Did you realize your iPhone also has a hidden Qr code scanner? It’s not an app in the traditional sense (it is, but it’s not in your app library), but it can be found via Spotlight.

It performs the same functions as the camera app but with a larger viewfinder.

Swipe down from the home screen to access the navigation menu bar of your iPhone and put in ‘Code Scanner.’

You may now get all scan-like whenever you want, simply swiping down from the top right-hand side of your screen.

The iPhone and iPad wallet apps can scan QR codes.

Wallet for iPhone and iPod has a built-in QR reader. After that, open the app and touch on Scan Code to Add a Pass to access the scanner.

You can scan QR code from this page for coupons, boarding passes, tickets, and loyalty cards, but only for the items that Wallet considers “passes.” You’ll get an error notice If you attempt to scan a QR code from another source.

If neither of the above options appeals to you, you may also visit the App Store, where you’ll find many free QR code reading apps.

Interesting Related Article: “ An insight on how QR Codes work for payment How To make a restaurant and bar menu QR code in a Post-COVID time for your operations?“