How to Upscale and Enhance Blurry Photos with AI 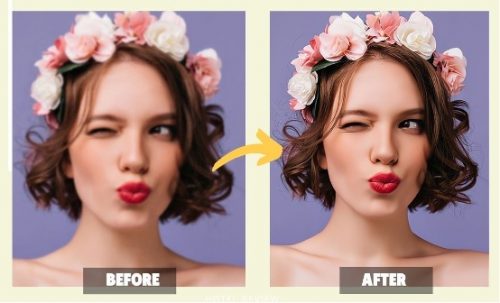 What Does High-Resolution Image Mean?

A high-resolution image is generally defined as a photograph that has a higher pixel count than the resolution of your screen. This means that the image will be clearer and have more detail since it was designed to be viewed at a larger size. The resolution of most digital cameras can range anywhere from 4 megapixels (MP) to over 20 MP. For comparison purposes, a 1080p TV set has about 2 million pixels on its screen; an HDTV has about 8 million pixels, and 4K TVs have about 16 million pixels on their screens.

A lower resolution camera, such as one with only 4 MP or less, will produce low-quality images when printed at large sizes – despite having plenty of detail for viewing on its small display. High-resolution cameras with larger sensors capture more light information per pixel than low-end models do – making them ideal for capturing photos in challenging conditions like dimly lit rooms or outdoors at night time without using flash which could cause a red-eye effect when taking pictures too close up against objects closer than two feet away (like pets).

How to Upscale an Image with Imgupscaler

Imgupscaler or “image upscaler” is an online photo enhancing tool to upscale photos to 4k without losing quality. It supports upscaling multiple images, including human portraits, animal photographs, landscape pictures, and anime wallpapers. Though it is a new and little-known image upscaling program in the market, it is very friendly to beginners. You can upscale up to 10 images without money-cost. Additionally, it supports batch processing too.

To use imgupscaler for image upscaling online, visit its official website first. Then drag and drop your image onto the window. The program will automatically upscale it to 4k for you. It will make blurry images sharpen and make the edges and contours of the object clear. You can also specify that several images be upscaled at once by selecting multiple files before initiating the process (though note that this will be slower than scaling just one photo).

Upscale an image with Waifu2x

l  What is Waifu2x

Waifu2x is a free online image upscaler that uses deep convolutional neural networks. It doesn’t support batch processing but can upscale an image up to 2x. The resulting images are low-resolution and often lack detail, though this can be fixed in Photoshop or similar programs after the fact. Some users have complained that Waifu2X produces blurry results, while others have praised it as being effective at enhancing their favorite anime characters’ appearances.

l  How to use Waifu2X to upscale an image?

Just visit waifu2x in your browser and upload a picture that you want to process. Once the image is uploaded to the platform, we need to choose the image upscaling ratio and noise reduction level. Of course, if you don’t want to denoise, leave this tab of Noise Reduction unchecked.

If you prefer a higher resolution, select a higher scaling ratio; if you would like a smaller image, select a lower scaling ratio. There are two styles for your to choose from Artwork and Photo. You can check the style you like most.

Click the “Convert” button and let waifu2x help you upscale the photo automatically. The process may last 10 ~ 20 seconds (depending on your internet connection status and the size of the original image). Finally, save your image by clicking the “download” button.

What is AI Image Upscaling?

AI image upscaling is a technology that uses artificial intelligence to restore images while preserving their visual quality. AI-based upscalers can learn from previous examples and adjust their output accordingly. They can also take advantage of deep learning, a type of machine learning that allows computers to learn through experience, such as when trained on thousands of images and fed huge amounts of data.

AI image upscalers are good at detecting the content of an image and enhancing it by applying corrections algorithmically—in other words, without having to re-render every single pixel in the picture as a result. This makes them much faster than traditional approaches like bilinear filtering or bicubic interpolation (which involve resampling), allowing you to view sharper results much more quickly on your display without having to wait for hours or days for processing time!

How Do AI Image Upscalers Work?

The image is analyzed and the new pixels are formed based on the analysis. This is achieved by building a neural network that can learn to predict how to add new pixels to get a better resolution. The computer then tries to find the best fit for each pixel in the original image, generating new ones out of its knowledge of what it learned from analyzing the original image.

Why Use AI Tools to Enhance Photo

What Makes Your Photo Blurry?

Other Tips to Avoid Blurry Photos

You can also take steps to avoid blurry photos. Here are a few tips:

If you are trying to get closer to your subject and don’t have a telephoto lens, try moving around instead of just zooming in on your camera. Your camera will be able to capture more detail with more light if you move around rather than just zooming in on the same spot with each shot. Also, remember that when you zoom in, the edges of your image get darker due to vignetting (light fall-off). This can make it harder for AI image upscaling software like Google Photos’ algorithms to improve visibility by increasing sharpness and contrast as much as possible without also making noise worse!

High ISOs mean less light is captured per pixel because there is less time for photons from each scene element (such as buildings or people) to hit those pixels before they exceed their capacity for capturing those photons; so higher ISOs mean less detail gets recorded per pixel; thus making images blurrier! On top of this, using high ISOs increases the chances that motion blur will result from shaky hands or wind blowing against buildings/people; thus decreasing sharpness even further!

In the end, AI upscaling can be used to improve the quality of almost any image. It’s fast, easy, and effective, so why wouldn’t you want to use it? Traditional upscaling will always have a place in certain scenarios—say when you need high-quality output for print or video—but for most uses, AI offers better results and more versatility. If you have an image that needs improving, consider using AI instead!