How much impact do politicians have on a country’s currency?

We look at how words and actions from key global figureheads can move forex prices.

In today’s hyperconnected era, words more than ever have the power to action change. From tweets to keynotes, press conferences to podcasts, rhetoric can cross borders and influence global minds at the click of a button, whether mouse, camera, or smartphone. But how much can mere words from politicians influence exchange rates?

Since Donald Trump’s inauguration as US President in 2016, he has made clear on several occasions his preference for a weak Dollar in order to make it cheaper and more attractive for foreign countries to buy American goods.

Trump has seen moderate success ‘talking down’ the Dollar, at least in the short term, in the earlier days of his presidency. For example, on April 12, 2017, Trump said in an interview with the Wall Street Journal that USD was ‘getting too strong’.  The US Dollar index, after having been up 0.1% earlier in the session at 100.82, promptly changed direction and dipped as low as 100.14. 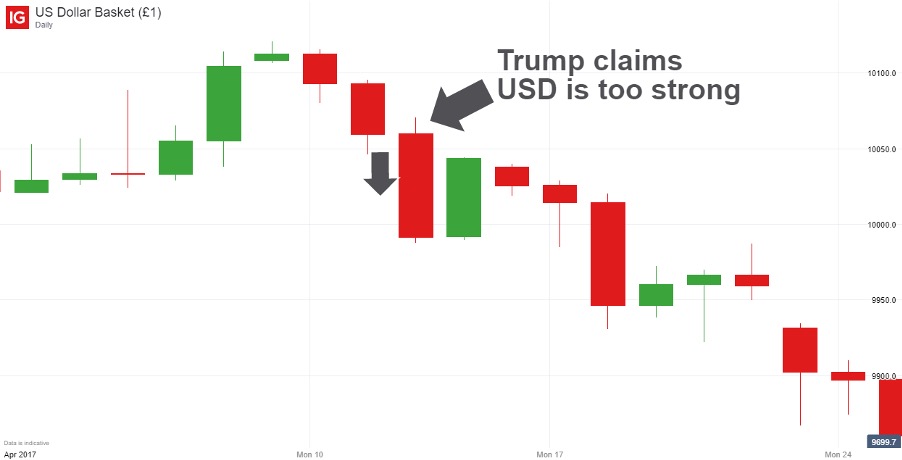 However, his words have also taken USD in the opposite direction. In May 2019, Trump announced that he would raise tariffs on Chinese goods. This ramping up of trade tensions led many forex market participants to react in a risk-off manner, with the historically safe-haven USD ending up trading higher.

Fast forward to 2020 and the coronavirus impact has again seen USD surge, once more as a result of risk-off sentiment, as traders and investors looked to Greenback for refuge. Against this kind of backdrop, the volume of funds going long Dollar means it becomes more difficult for words to make such an impact in helping drive USD lower again.

The Euro’s price can also be moved by news and political discourse. In May 2017, the Euro surged to a six-month high in May 2017 after German Chancellor Angela Merkel said it was ‘too weak’ for Germany.

However, the obvious difference between the Euro and the US Dollar is the utilization of EUR across disparate countries. The Euro is the official currency of 19 of the 27 member countries that comprise the European Union, meaning that while European Central Bank authorities like Mario Draghi have been influential in the moves of EUR previously, individual political figures may be less likely to cause shifts in the price of currency than a leader like Trump who serves as more of a single representative figurehead.

Aside from words, there are certainly other paths for politicians to address the strength of their currency. China, for example, has historically devalued its currency to protect the interests of its exporters and economy.

In the case of the US, the Exchange Stabilization fund of some $126 billion is a possible source for buying foreign currency in an attempt to debase USD. However, this sum pales in comparison to the volume of the $6.6 trillion per day forex market, meaning selling USD may not be so effective – and has indeed only been undertaken by the US Treasury a few times in recent decades.

Interesting Related Article: “What is Forex?“