Is the casino industry the perfect example of offline/online competition? 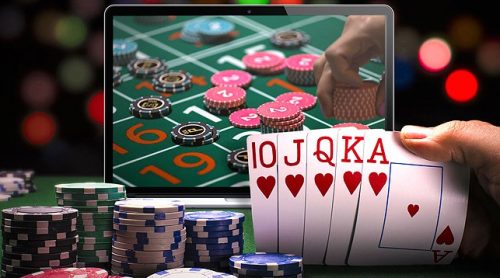 As more and more facets of our lives are shared and take place online, the competition between offline businesses and their online counterparts continues to grow. Each step forwards that technology takes creates a wave of backlash before people begin to adjust and accept the new status quo. Of all the industries affected, is the casino industry the perfect example of offline/online competition?

A possible counterpoint to the argument that casinos are the perfect example of online/offline competition is that the audience for traditional casinos includes many people who have little interest in gambling and are there for other reasons. Many of the perks that casinos provide, such as gourmet buffets, pleasant bars and quality entertainment, can be enjoyed by any patron, not just those who are there to gamble. As of 2013, some Las Vegas casino resorts were earning more of their revenue from onsite dance clubs than from slot machines. There is no crossover between these casino-goers and the audience for online casinos.

The internet has increased access to media from around the world. More and more people now have access to music and movies from all different countries. Even many world-famous art museums, such as the Rijksmuseum in Amsterdam and the Louvre in Paris, have begun to digitize their collections to increase accessibility. In some instances, it is a case of collaboration rather than competition, but for the film and music industries, there is definitely competition between the offline and online.

The last year, in particular, has seen the rise of competition between movie theaters and streaming movie releases. Many of the big studios have chosen to release their new films onto their streaming platforms rather than waiting until movie theaters reopen. Streaming has taken over how we consume film and television content, as the pandemic has kept us out of movie theaters. Movie theaters had already begun to diversify in the last decade in order to compete. Chains such as Alamo Draft House and smaller independent movie theaters have begun to serve meals and alcohol, and have replaced the traditional seats with comfy sofas and recliners. Others have diversified what they show – instead of focusing on first-run films, which are more expensive to show, many movie theaters offer cult movie nights, classic films, and series or days directed at particular audiences. These changes make it more likely that movie theaters will be able to survive the online/offline competition.

The music industry has been fighting the offline/online battle for over a decade, as the ability to download music and the rise of music streaming services has reduced the demand for CDs. Fears that streaming would hurt artists’ revenue have proved to be largely unfounded, and ticket and merchandise sales continue to be important sources of income. Even the battle between online/offline ways of listening to music seems to have reached a stalemate – CDs might be dying out but vinyl records are making a comeback!

Brick-and-mortar stores have been struggling against online retailers for years. The first major battle between the two was in the realm of book sellers. Amazon was initially started as a book retailer and its popularity was ultimately responsible for the end of some of the biggest offline booksellers in the United States. While many stores have had to add online shopping as an option, the competition between online/offline retail has not caused the end of traditional shopping, as many feared it would. Many people prefer to see products in person and try them on before buying them, and a trip to the mall is still a fun day out for most young people.

The online world continues to grow and become a part of more industries. However, since the experience of going and doing is a part of what makes activities like watching movies, shopping or gambling so much fun, it is unlikely that the competition between offline/online will ever end.

Interesting Related Article: “The Impact of Coronavirus on the Casino Industry“