Lego “My Own Creation” Design Ideas 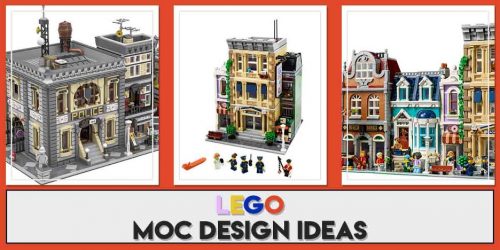 The world of lego is a gate to enter in a vast era of your imaginative world. The MOC stands for “My own Creations,” which is the ultimate way to design the mini version of your favorites. Whether lego mocs forms a character, a building, or a theme, lego Star Wars moc, Jurassic park theme moc, or twin-pod cloud car in Star Wars are most favorite MOC of Lego The fan-made MOC creations have distinguished features from official lego kits.

You can experiment with many innovative moc designs with old lego bricks. You can also purchase a theme-based lego kit to dedicate your love and admiration.

The Lego spaceship Moc’s have a vast range, and several designers experiment with versatile MOCs with lego spaceship themes. There are many designs with spacecraft, satellites, space stations, and many other kinds of MOCs.

Creating your own Lego City is an exciting and engaging activity. The MOC designers love to experiment in lego city creation, Whether it’s a modern city or traditional walkways of the countryside. The potential to add a combination of modern and traditional lego light kits brings life to lego MOC.

In the world of fairy tales, castles are essential elements. The MOC designers built perfect and elite-style lego castles. The mesmerizing and stunning look of the lego castle is a way to represent the designer’s imagination.

Pirates and voyages are an essential part of the fiction world. Therefore turning the fiction into the real world through lego ships MOCs is an exciting activity.

The Pirates of Barracuda Bay have discovered a unique island and build a new home. This Pirate Fortress MOC is a substitute structure for kit 21322  and works only pieces of that set.

The Fortress has two islands joined by a bridge. The tiny island has a pier that joins through the bridge to the main door under the tower. The long peninsula houses the central parts of the Fortress. On the ground stage, you can reach the prison and the stocks. The primary location has the main gate and combines various rooms.

Speedy and compact means for the transport of troops or stuff, equipped with communication and security gadgets, inside it is reasonable to install a Minifigure in the driver’s place. The lego Lamborghini is a loyal tribute to the original Lamborghini Sian with all essential details and movements.

Nothing gets desirous Star Wars fans more excited than a Star Wars movie announcement, and a distinct Star Wars LEGO set that often originated to correspond with the latest Star Wars film release.

One of the most successful LEGO themes of all eras is the Star Wars sets. The theme persists popular and is becoming more prominent as fans continue to be excited by iconic spacecraft and minifigures inspired by the Star Wars saga.
You may also like “Awards and Recognition”

LEGO issued the initial Star Wars set in 1979. Since then, the organization has created remarkable and most coveted Star Wars series, including the Final Collectors Series. LEGO ought to pay for the permitting for Star Wars, and it is no wonder that any of the collectible sets fetch some sober cash.

What percentage of various LEGO portions is made?

There are more than 900 million unique strategies of blending six eight-stud bricks of the same shade. The corporation has made 400 billion LEGO elements or sixty bricks for everyone on the planet. If stacked on top of every different, the quantities may want to form 10 towers achieving the whole way from the Earth to the Moon.

Set 926-1, ‘the gap Command Center’ is the most treasured LEGO set, currently worth $10,141. Released in 2013, the ‘Mr. Gold’ Minifigure has visible the very exceptional appreciation of any LEGO set, growing from its retail price of $2.99 to now being worth $4,680. Unlike other pieces such as the lego piece 26047, the command center is very rare.

How many specific LEGO elements are there in 2021?

Factors introduced in October 2021, with links to which devices they come in so you can take a look at those you might be inquisitive about.

What number of LEGO detail numbers are there?

Our database contains around 18,000 layout numbers but many extra have been allocated over time however are now out of use, following elements being discontinued or redesigned, at which factor they’re given a new one.

Do all Lego parts have names?

Every own family, it seems, has its own set of phrases for describing particular Lego portions. No person uses professional names. … Lego nomenclature is crucial for family Lego building. Check out the object in which he lists the call each of the 4 children has for the equal LEGO portions.

What is the maximum commonplace LEGO Minifigure?

Yet again Batman tops the listing, thank you in factor to his appearance in the LEGO films and the accompanying collectible Minifigure collection. The crimson ninja Kai takes the second region so even as he has fewer versions than Lloyd he is to be had in 25 more sets. I wager the pink one is constantly the most famous, no matter the concern count number.