It is safe to say that gun ownership and marijuana legalization are two of the most contentious and controversial topics that the USA has been dealing with over the last few years. Unfortunately, it doesn’t seem like it’s going to be cleared up at any point soon either. 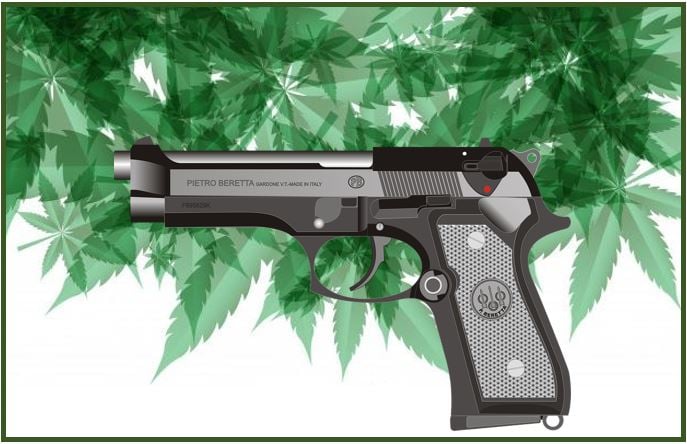 Marijuana legalization is in a constant state of flux with many variables complicating the matter. Inconsistencies in state and federal laws make the situation pretty hard to comprehend, and there is a lot of uncertainty regarding the topic. Throw in the tender issue of gun ownership for marijuana users, and you’ve got yourself one heck of a headache!

So where do marijuana users stand on their gun ownership rights exactly? Let’s break it down.

What you should know about marijuana and guns

At the time of writing marijuana is legal in 11 states for adults over the age of 21, and legal for medical use in 33 states. That’s a considerable amount; however, the differences in the law between these states can often vary greatly, too.

For example, different states will only recognize certain criteria to qualify for medical use, and the age requirements can differ as well as the process that people must undergo to acquire cannabis.

For example, you can walk right into a cannabis dispensary or order online whether you are a medical user or a recreational user. Other states have stringent rules on their medical qualifications and may require users to jump through a few more hoops before getting their hands on their cannabis.

On top of that, gun laws get relatively complicated when it gets down to the state laws. Under the NFA and Federal regulations, you can purchase a Long Gun (shotgun or rifle) in any state, just as long as the sale uses the same laws as the state that you reside in.

For example, assault rifles are banned in New York State, so even if a person rising in New York tried to buy an assault rifle in a different state where it is legal, they wouldn’t be able to.

First of all, it’s important to understand that under the Controlled Substance Act of 1970, marijuana and THC (the primary psychoactive ingredient in cannabis) are Schedule 1 controlled substances.

If you didn’t already know, Schedule 1 controlled substances are considered to be the most dangerous.

According to the CSA “substances in this schedule have no currently accepted medical use in the United States, a lack of accepted safety for use under medical supervision, and a high potential for abuse.”

This is immediately contradictory to at least 33 state laws which have declared marijuana legal for medicinal use. The federal law clearly prohibits people from taking marijuana, both recreationally and medically, regardless of what the specific state laws are.

Now for the gun ownership problem

The Gun Control Act of 1996 clearly states that any unlawful user of a controlled substance is not allowed to purchase or even own a firearm. As marijuana is a Schedule 1 controlled substance, this sets it firmly in that category. Even though it may be lawful in your state, when you purchase and smoke weed, you are committing a federal offence.

Even though this law is very clear, the ambiguity is caused by the prevalence of cannabis smoking in legalized states and the lack of enforcement of the federal law regarding medical and recreational use.

The future of gun ownership for marijuana users

The future is currently unclear. The US Presidential 2020 will undoubtedly play a huge role as to what happens with federal marijuana and gun ownership laws in the future. It understandably has become a key part of Presidential candidate’s campaigns.

It estimated that over 66% of voters are in favour of legalization of cannabis at a federal level, which is a massive number of potential voters to appeal to. It seems evident that marijuana doesn’t deserve its place alongside LSD and heroin as the most dangerous drugs in the Schedule 1 category.

Whether or not that will change remains to be seen.

What if you already have a gun

When purchasing a firearm, applicants must fill out a form called the Federal ATF 4473. This is a questionnaire that determines whether or not somebody can buy a gun legally or not.

Unsurprisingly, marijuana usage comes up on the form, asking applicants whether or not they have used cannabis or any other controlled substance. If applicants answer this question dishonestly, then it is considered to be breaking federal law.

This is one of the main areas that marijuana users can find themselves in hot water over. If you fraudulently fill out this form then could be prosecuted and face some substantial jail time.

However, if you already own a gun, then you do not have to fill out a form. So where does this leave you?

Well, simply put – you’re in a tough spot. Technically, you are committing a federal offence by just possessing marijuana and a gun at the same time. This is what the ATF4437 says on the matter:

“The use or possession of marijuana remains unlawful under Federal law regardless of whether it has been legalized or decriminalized for medicinal or recreational purposes in the state where you reside.”

While many states have legalized the use of cannabis for both medical and recreational use, it remains banned on the Controlled Substances Act of 1970.

It currently sits as a Schedule 1 prohibited substance, which sets it in the same category as heroin and LSD, deeming it to have no medical benefits and to have a high potential for abuse.

Unfortunately for gun owners who take cannabis (even if it is medicinally), this disqualifies you from being able to own a gun legally, and you will be committing a federal offence on multiple counts if you do manage to get your hands on one.

Clearly, these contradictory laws need to be ironed out as there is a great deal of ambiguity surrounding both marijuana laws and gun ownership laws at present. Let’s hope that the US Presidential election of 2020 will bring some well-needed clarity on the matter.

For now, it is better to stay away from combining marijuana use and gun ownership until the issue is resolved.