Most Popular Stocks In July 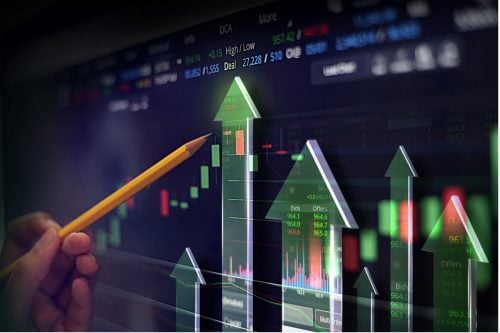 With much drastic occurrences in the world today, it’s not too hard to see the ripple effects on the financial markets.

From foreign exchange (forex) to soft commodities, external events – whether political, economic, or any other form – are always strong contributing factors to market performance.

And this is no different when it comes to the stock market.

Being a successful stock trader means having a clear awareness of which stocks present the best opportunities for profit, and knowing how to approach these trades.

As such, we’ve provided a round-up of the most popular stocks in July 2022, to show you how their performance could offer potential avenues for success.

One of the biggest impacts on the stock market in July 2022, comes from the ongoing energy crisis that’s swept across almost every country, following Russia’s invasion of Ukraine.

Naturally, this has particularly affected the performance of energy company stocks, and Occidental Petroleum Corp (OXY) is a prime example.

Russia was the third biggest oil producer in the world, and the main energy supplier for the whole of Europe – accounting for 40% of natural gas imports. Being such an integral part of the world’s energy supply, the trade sanctions prohibiting Russian exports created a huge dent in energy supply and demand.

Since then, energy prices have risen rapidly across the globe, and energy companies in places like the US are now much more crucial in supplying global energy.

At the time of writing, OXY has gained over 107% year to date, and in the month of July alone, has risen by over 10%.

This stock could prove to be a profitable investment, as the energy crisis doesn’t show any significant signs of slowing down, and energy companies like this are still in high demand.

Exxon Mobil Corporation (XOM), a multinational oil and gas corporation, is another energy company whose stock is seemingly popular this month.

Once again, the looming energy crisis is driving the demand for these energy companies, allowing them to profit from being integral components in supplying the world’s energy.

On July 26th, Exxon announced they’ve made two new oil discoveries offshore in Guyana, and are:

“continuing to accelerate exploration, development and production activities for the benefit of stakeholders.”

This proves XOM to be a worthy choice for potential investment, as it looks as if their energy supply and exploration is set to be propelled further.

McKesson Corporation (MCK) has also revealed itself to be a popular stock for investors this month.

MCK is a global healthcare company which manufactures and distributes pharmaceuticals, as well as medical supplies and information technology. In fact, the company delivers one third of all pharmaceuticals used in North America.

Behind the scenes of the energy and cost-of-living crisis, healthcare companies have remained essential across most economies.

Year to date, MCK has seen a 66% rise in stock value, most likely due to the aftermath of the COVID-19 virus, and the steady growth appears as if it may continue.

MCK has recently announced – on June 23rd – their plans to form an Oncology Research Joint venture, in which they will expand clinical research and accelerate drug development across several communities.

MCK will own 51% of the joint venture, giving them operational control.

Following the announcement, MCK has seen an 8.5% increase, as investors are seeing the potential for success in the venture, along with the fact that MCK have lead control.

Now that you know the most popular stocks this month, you can more accurately plan your next trades, and aim to profit from stocks that are currently performing well.

Also, be sure to look at the performance of different indices – such as the Financial Times Stock Exchange 100 (FTSE 100) – since groups of stocks may also show potential for profit, as well as the performance of individual ones.