Most Successful Examples Of Using Scrum 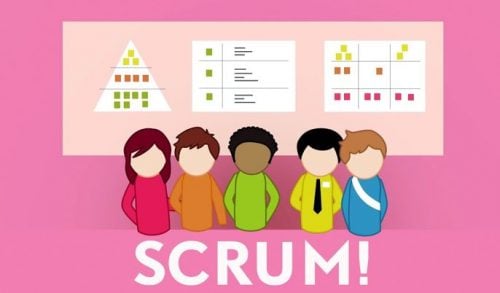 Scrum methodology is primarily used in developing software products but can also be applied in business processes. The term “scrum” originates from rugby, which restarts play. As a result, scrum plays a vital role in the world of startups and entrepreneurship. Let’s look at some of the most successful examples of how scrum can change your business.

An excellent example of the successful application of scrum in software development can be seen in the work of the globally popular webmail provider – Gmail.

Using this method, Google could successfully bring to market a complex project within the predicted time frame. For example, the story goes that when one person in the development team felt he needed about three months to complete his part of the project, he was challenged and asked why he couldn’t get the job done within two weeks.

When Salesforce started using scrum, they didn’t have a name for it. So they just applied the principles to their development process. Visualizing their workflow in a physical space, breaking down tasks into small chunks, and continually showing their progress helped them to get more out of the product development process.

Tracking your team’s progress using scrum can help you get more out of your business overall. Take some time in your business today to see how you can incorporate scrum into your overall workflow.

It all began when Drew Houston, the founder of Dropbox, had difficulty sharing his photos with his fiancee, whose computer was broken. So he decided to create a free service allowing one to store and share files easily. He didn’t know that it would reach $10 billion worth almost ten years later. In 2013, Houston hired Scott Van Winkle as the VP of Operations. Van Winkle brought the Scrum method for software development to Dropbox.

At first, the whole team resisted this change of working style, but soon they realized that scrum doesn’t take too much time from their days and also helped them find new opportunities to grow their business. After only three months of using scrum, Dropbox’s revenue grew by 20 percent per month and doubled in only twelve months.

The team of Dropbox started working at set times in the day and focusing on one specific thing only. They constantly updated Houston with progress reports, and he could see the progress and change in the product right after each week. He knew what people needed and what they didn’t need yet.

The success of this software lies in the fact that everyone works together as a team – designers, developers, and salespeople. And scrum allows them to do so.

One of the most successful examples of using scrum is how Facebook uses scrum to develop its social media platform.

The company not only develops its code but also uses scrum to develop its business mechanisms.

Facebook, one of the most popular social networks in the world, has created one of the most commonly used waterfall processes for building software. They are constantly evolving, and it’s all thanks to scrum. For example, one of Facebook’s practices is “Two-Pizza team,” which means that a team, no matter how big it is, can never be larger than two pizzas. This delivers some benefits to the organization and its employees.

Deployment in the IT industry

This means that software teams need to be able to react and adapt to change as quickly as possible. With scrum, they run better chances of doing that. The main reason is the format that facilitates a short feedback loop between the development team and the customer or a sponsor at the end of each sprint. That allows the team to collect valuable feedback frequently, make adjustments if needed, and start the next sprint with a better product and higher efficiency. The trial and error approach is one way to master the value and efficiency of the short feedback loop/cycle. Alternatively, you can get your Scrum certification from reputable training providers.

The best part is that with this method, you will not waste any time producing features nobody needs or wants. Instead, you will focus on delivering new features customers want. Developing a new software can be very time-consuming, but if you choose scrum as a development methodology, you can cut that time in half.

Interesting Related Article: “How Does Scrum Help in Daily Life?“