Every day, we pass judgment on each other without even realizing it. They aren’t always negative judgments, but they are often not very accurate ones either. How many times have you seen someone in passing and made a snap judgment on them? You’d be lying if you said you have never done it that because we all have.

People judge others all the time based on their weight, the way they dress, who they hang around with, their faces,… and for what? Most of us believe that we are good and accurate judges of character. 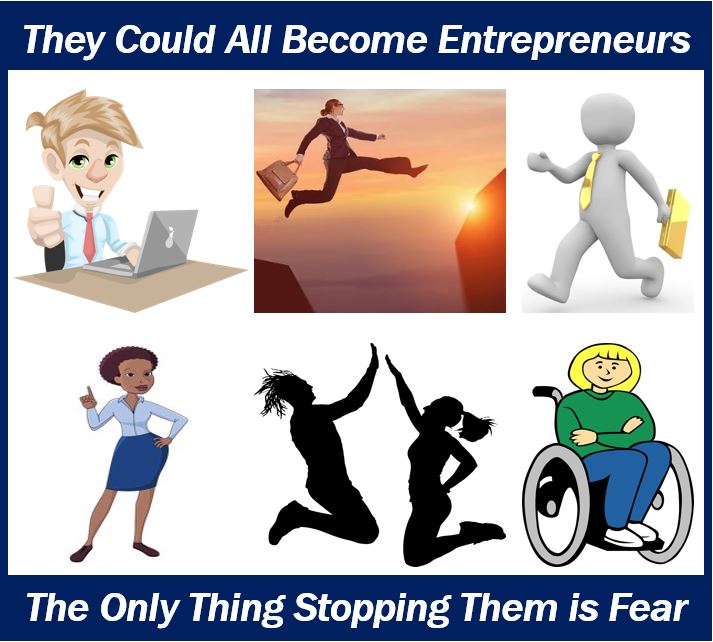 Do you know how many people have got it wrong? There are many. In fact, sometimes the very person they initially misjudged negatively ended up being one of their closest friends.

This does not only happen in our personal lives, but also in the world of business. Entrepreneurs, for example, often get the wrong impression about a business associate, another company, or a situation.

We are so used to putting people in boxes that we forget that others do the same to us. We are forever creating myths about situations, people, etc. A myth, in this context, is a misconception, i.e., thoughts or opinions about people, places, or things based on false or no information, negative thinking, fear, and a lack of understanding (ignorance).

Myths have prevented millions of people globally from ever achieving their goals or realizing their dreams. Aspiring entrepreneurs commonly feel intimidated, often for unreal or silly reasons.

It is true that setting up your own business and then getting it to thrive is no easy task. However, it is not impossible. It is not as difficult as many people believe. As long as you have faith, work hard, persevere, and have patience, you have a good chance of succeeding.

There are all kinds of tools and resources available to help you form an LLC. Rid yourself of those gremlins that infect your mind, let your passion push you forward, and arm yourself with facts through proper research.

Succeeding in business is not a question of being a genius, never sleeping, or having super-human abilities. Businesspeople, including leaders in their field, are human beings just like you and me. They all have one thing in common; they studied their marketplace, competitors, products or services, and potential customers carefully.

Some myths regarding entrepreneurs

If you believe that all entrepreneurs are geniuses with super-high IQs who could rule the world if they wished, don’t! It is a myth.

Many self-made millionaires and billionaires today never went to university. In fact, some of them dropped out of secondary or high school.

Richard Branson, who founded the Virgin Group, left school at the age of sixteen. The Virgin Group today controls over 400 companies in dozens of different fields. CNBC did a report – what they wrote about some of these well-known entrepreneurs would blow your mind!

For some reason, all entrepreneurs are people who like to tinker around with things all day… that’s what a lot of people think. They believe that entrepreneurs were one of those kids who would take their toys apart and then try to put them back together. This is another myth.

Those who succeeded in the science and engineering fields, perhaps did tinker with devices and gadgets when they were children. However, successful businesspeople in the fields of marketing, advertising, finance, or catering did not.

A common image of a successful entrepreneur is somebody who works into the early hours of the morning and hardly ever sleeps, if at all. Some of them do sleep very little, but that is not what made them successful. Many police officers, shift workers, and junior doctors also tend to sleep very little.

Lack of sleep is a trait that millions of people have. It has become more common today. In fact, in some parts of the world, governments say it is now a public health problem.

It is important to remember that lack of sleep has nothing to do with becoming a successful businessperson. Rather, it is a phenomenon that affects a growing number of people from all socioeconomic groups. Many entrepreneurs, professionals, shift-workers, and others are today letting science help them sleep better.

Myth 4: Entrepreneurship is something you’re born with

It is true that to become, for example, a professional basketball player, you must be tall. We cannot learn to be tall. Our height is determined by our genes.

To be a successful businessperson, is it necessary to be born with the entrepreneur gene? Of course not. There is no such gene. If you possess dedication, faith, and passion, you can become a good entrepreneur.

Obviously, you need to enjoy working in the world of business, explaining things to people, and convincing them about things. However, as far as the nature vs. nurture debate is concerned, being successful in the marketplace is definitely a question of nurture.

Interesting related article: “What is an Entrepreneur?”