.NET Development: Essentials You Need to Know Before Starting Your Project

.NET is dead? Long live .NET? The platform created and maintained by Microsoft has its pros and cons, but remains quite a popular tool. 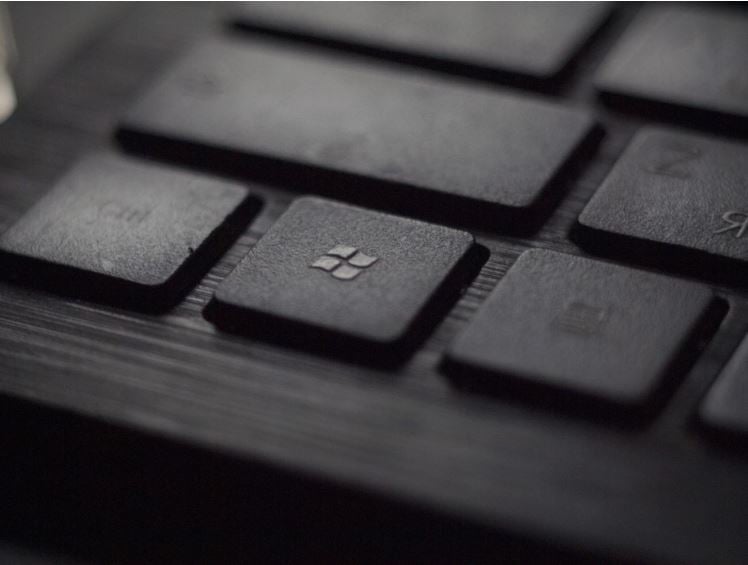 According to Stack Overflow’s 2018 study, the framework called .NET Core takes the fourth place losing only 0.6% to React. It’s also the fifth most loved, the fifth least dreaded, and the fifth most wanted ecosystem. Simultaneously, Visual Basic .NET language was sixth in the TIOBE index for July 2019 right after C# that is also widely used by .NET developers.

Considering these stats, wide application options, and huge support from one of the largest IT companies worldwide, the described framework should be attractive for business owners. If you contemplate launching the project based on .NET, spend a few minutes to reveal the tech’s features, capabilities, strengths, and weaknesses.

Diving into the .NET History

Let’s begin with a portion of history. Back in 1999, Microsoft smart minds decided to create a brand new framework to relieve developers from various low-level tasks. For this, engineers took the basement of C/C++ and turned it into a fresh framework. In 2002, Microsoft released the first version of its .NET Framework with C# language. It’s focused on the idea of managed code executed under a runtime environment.

The first tools were based on Windows systems only so developers had to study this ecosystem. In 2016, authors launched .NET Core – an innovative cross-platform and open-source framework that can work with other systems like Mac and Linux. Moreover, that year, Microsoft consumed Xamarin tech to boost the company’s mobile dev sector. Today .NET consists of three main modules: Framework, Core, and Xamarin with the required infrastructure.

Further, we cover this combination in detail.

Put very simply, .NET is an environment that features numerous services for developers and their apps. Two the largest components are Common Language Runtime (CLR) aka the main engine and Class Libraries with reusable elements to be integrated into new products.

To grasp the idea of .NET, we suggest checking three subsections dedicated to the project’s goals, structure, and use cases.

Among the most important concepts, Microsoft lists the next ones:

Hence, authors behind .NET want to deliver one and universal platform for different developers, get rid of unnecessary operations and simplify the coding process. The environment handles memory management and execution, provides for common types, different classes, interoperability, compatibility, and a wide choice of dev tech. 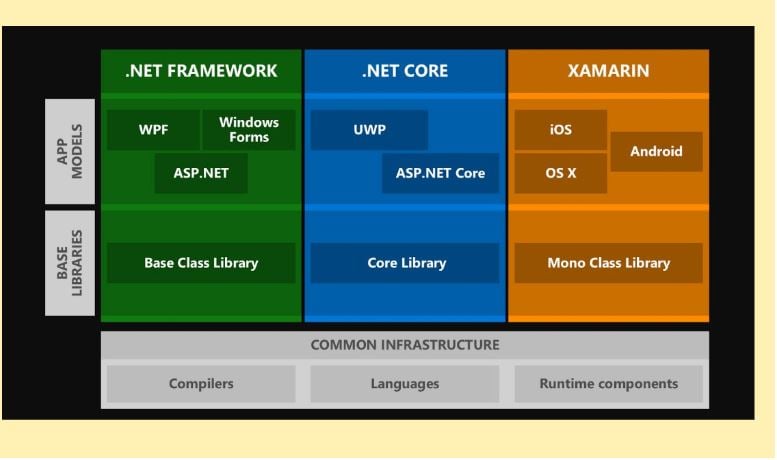 As we mentioned, there are three general components of the entire platform:

Finally, there are infrastructure tools like .NET Standard. It connects all three components so engineers can access one library with common classes. All frameworks work on CLRs that manage memory, execute and verify code, etc. Developers can apply several languages, including C#, F#, Visual Basic, and other compatible tools.

For your information, here are a few examples of .NET usage in the real world. Overall, the platform suits extremely different projects because of its comprehensiveness, interoperability, and Microsoft global approach. .NET is good for enterprises because of rich toolsets that allow to create and maintain both internal and public integrated systems. Moreover, .NET suits SMBs because of its scalability options.

Talking about exact projects, you can use .NET for cross-platform tasks thanks to .NET Core tools. From gaming solutions (remember Xbox) to AR/VR (like HoloLens – a device for mixed reality access that has great potential in different industries), the framework shows great results. Among companies that use it, there are famous names like Siemens, Tencent, Stack Overflow, and, of course, Microsoft. 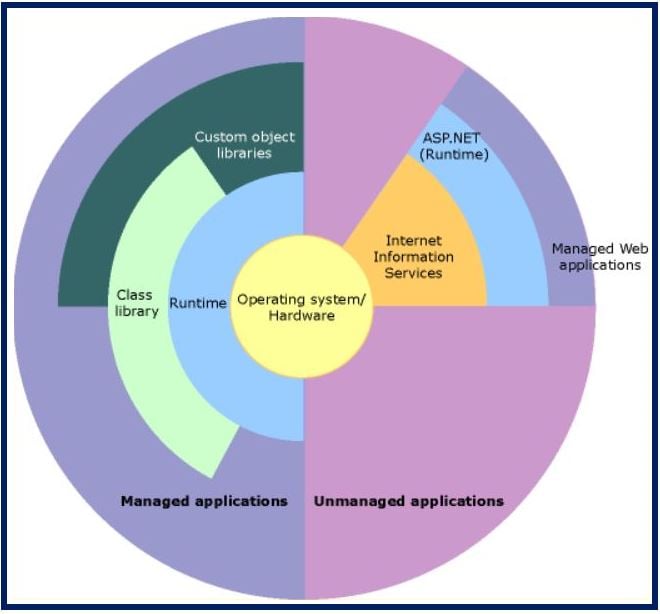 Pros and Cons of .NET

Now, don’t you want to know more about the strengths and weaknesses of the framework? There are a lot of adepts who insist that .NET is perfect while skeptics consider it an inconvenient relic. Let’s try to be unbiased.

In 2018, SlasData released the next edition of its regular Developer Economics survey. Analysts contacted more than 25,000 IT employers from 167 countries and studied the global market. The results reveal that there are 6.2 million C# developers with the highest demand in AR/VR, desktop, and gaming sectors.

As long as this language is widely used in .NET, programmers should study it among the first ones. However, there are a few other skills and perks essential for involved employers. Let’s divide them into three categories:

Your Project with .NET

Now, you know what .NET is, how it works, and how to find the most skilled developers. With this knowledge, it should be way easier to build an internal IT department or outsource the project to professionals. You want to consider software development costs and the employees’ mastery to get the required results without wasting money.

At the end of the day, .NET remains useful and there are a lot of developers willing to apply their skills. Just find them!